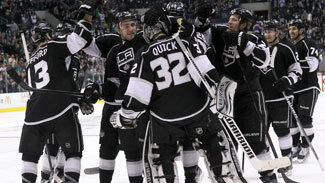 — The Kings won their sixth consecutive game and moved into first place in the Pacific Division as they beat the St. Louis Blues 1-0 in a shootout on Thursday night at Staples Center.

— The Kings improved to 6-7 in shootouts this season. Mike Richards and T.J. Oshie scored in the second round, then Jeff Carter scored in the fourth round.

— The Kings finished the season series against St. Louis with a 3-1-0 record, including one shootout win.

— The Kings recorded their ninth shutout of the season. Jonathan Quick made 35 saves to record his eighth shutout of the season, tied with the New York Rangers’ Henrik Lundqvist for most in the NHL. Quick also tied Rogie Vachon for most shutouts in a single season for the Kings. Vachon had eight shutouts in 1976-77. Quick recorded his 22nd career shutout. Vachon holds the Kings’ all-time record with 32.