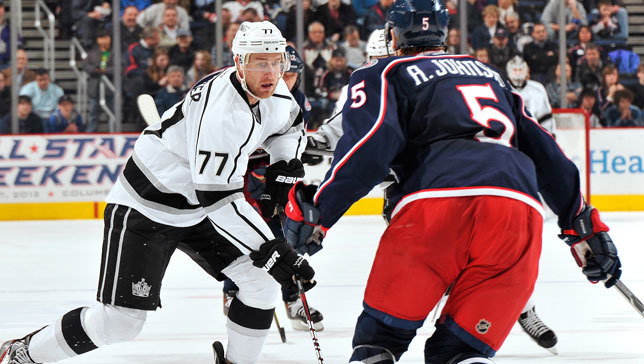 It’s been a tough season for Columbus Blue Jackets fans, who haven’t had much to cheer. After high early-season expectations — they were talking playoffs in Columbus — the Blue Jackets sunk to the bottom of the Western Conference. Then, on top of the losing, they had to deal with reports that, to various degrees, stars Jeff Carter and Rick Nash wanted out. Well, Carter left and Nash stayed, and the Blue Jackets have now run off a season-high four-game winning streak. Last night’s game might have been the most satisfying for the beleaguered Blue Jackets fans, who booed every time Carter touched the puck and cheered every time he turned it over or was hit. The Blue Jackets beat the Kings twice in four games this season, and to be certain, those four points will come back to haunt the Kings if they end up missing the playoffs by a narrow margin. Here’s how The Columbus Dispatch covered last night’s game, followed by some additional postgame quotes from the Blue Jackets’ locker room, courtesy of The Associated Press…

JACK JOHNSON
(on the game…) “This one felt good. This has been a really great change for me. I’ve been excited to come to the rink every day. These guys here have a blast here at the rink and it’s carrying over onto the ice. Guys are loose and having fun. That’s what this game is supposed to be all about.”

MARK LETESTU
(on his goals…) “It’s just a matter of going to the net. It’s tough to score in this league from outside. When you get to the net and get a little puck luck, good things happen.”

COACH TODD RICHARDS
(on the game…) “Tonight, obviously, I thought our No. 7 [Johnson] was pretty good. He was really good. Scoring a goal, you could see the emotion there.”