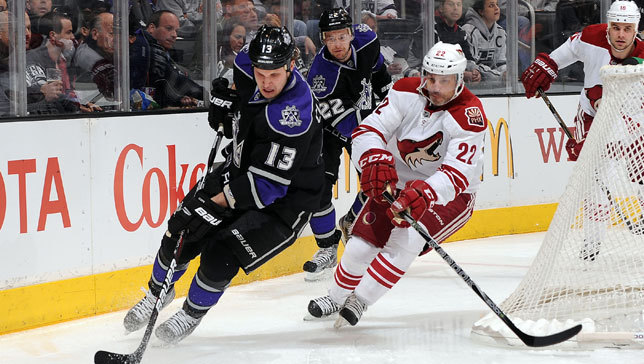 – The Kings were shut out for the seventh time this season, as they lost to the Phoenix Coyotes 1-0 on Thursday night at Staples Center.

— The Kings fell into eighth place in the Western Conference, two points ahead of ninth-place Calgary.

— The Kings suffered their third 1-0 loss this season. The Kings were shut out six times in 82 games last season.

— The Kings had been 6-0-1 in their previous seven games against Phoenix, including four consecutive wins over the Coyotes at Staples Center.

— The Kings outshot the Coyotes 28-21, including 11-6 in the first period. The Kings also had 25 shots miss the net and 10 shot attempts blocked.

— The Kings went 0-for-3 on the power play and 4-for-5 on the penalty kill. The Kings had killed 20 consecutive penalties before Radim Vrbata’s second-period power-play goal.

— Jonathan Quick stopped 20 of 21 shots, and had his goals-against average fall from 1.91 to 1.89 in the loss. Nine times in 49 starts this season, Quick has allowed one goal in regulation and not recorded the victory. He has suffered three 1-0 regulation losses and six 2-1 overtime/shootout losses.