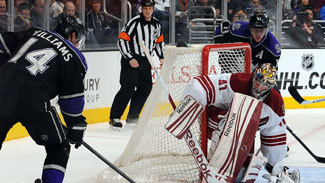 The Kings are scheduled to practice today at 11 a.m. in El Segundo. Here are some postgame quotes from the Coyotes’ locker room from last night…

COACH DAVE TIPPETT
(on the game…) “That was a very competitive game. We knew they were going to be competitive. We had to make sure that our team was very competitive. We talked about the importance of this game and where we are in the standings and where they are in the standings. We have to be all-in if we’re going to have a chance at winning this game and I thought we were all in. Good effort. … We played a smart hard game and we found a way to win.”

(on the strong play since the All-Star break…) “That’s a competitive game. That’s a really close game but our effort and commitment to doing things right, that allows us to win (out) there each and every night. That break was really good for our group. We got some energy back and now we’re playing hard.”

SHANE DOAN
(on the game…) “It was great. It’s one of those games that you love to play in and you really like to win. It was a big one for us.”

(on his fight with Dustin Brown…) “It’s one of those things. It’s part of the game and Brownie plays that way all the time. He hits hard. Both sides are trying to set the tone and he was more than willing and it’s part of the game.”

(on the emotions of the game…) “Everyone realized how big of a game it was and how important it was for us to find a way to win. They’re ahead of us in the standings, they got the position we want, and everybody is chasing everybody right now.”

MIKE SMITH
(on not losing focus after taking a penalty…) “I made sure I didn’t because you’re right, you can kind of rally and then get thrown off your game, but I knew this was an important game and there was no time to get mentally rattled. Just tried to stay focused and worry about the next shot.”