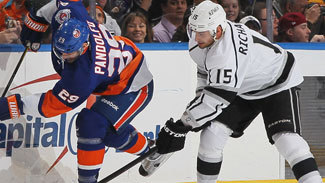 — A lack of a second goal once again cost the Kings, as they lost to the New York Islanders 2-1 in overtime on Saturday afternoon at Nassau Coliseum.

— The Kings have scored a total of six goals in their last five games.

— The Kings are now 1-3-1 on this season-long six-game road trip, with today’s game at Dallas remaining.

— The Kings allowed a first-period goal for the first time in their last 10 games.

— Jonathan Quick stopped 23 of 25 shots. Eight times in 47 starts this season, Quick has allowed one goal in regulation and not recorded the victory. He has suffered two 1-0 regulation losses and six 2-1 overtime/shootout losses. Quick has allowed a total of 32 goals in his last 21 starts.

— Andrei Loktionov scored the Kings’ goal, for his first goal and fifth point of the season. Loktionov had failed to record a point in 15 consecutive games. Loktionov has five goals in 54 career NHL games. His previous goal was on Feb. 16, 2011, at Columbus.

— Dustin Brown had an assist, for his 16th assist and 29th point of the season. Brown has an assist in each of his last two games.

— Rob Scuderi had an assist, for his seventh assist and eighth point of the season. Scuderi has two assist in his last three games. Six of Scuderi’s seven assists have come on the road.

— Jordan Nolan made his NHL debut. Nolan played 14 minutes, 18 seconds, and did not record a shot on goal. He was credited with two hits and took a third-period interference penalty.

— Dwight King made his season debut. King played 15 minutes, 11 seconds, and did not record a shot on goal. He was credited with two hits.