The view from Tampa 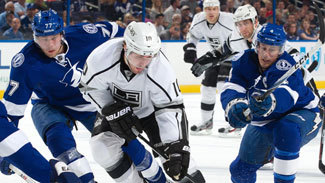 Yesterday morning, one of the local Tampa papers did a huge — and very well-presented — sports front-page package about how the Lightning were “back.’’ The timing was understandable, given that the Lightning were 6-0-1 in their last seven going into last night’s game. Appeasement of the home fans didn’t last long. By the third period, there was a decent-sized segment of the crowd booing during and after failed power plays. Fans in Tampa have becoming accustomed to seeing goals, because the Lightning had been held to one goal only once in their previous 11 games. But the Kings — at least after the first period — did a solid job of playing within their system and not letting the game get excessively wide open. Here’s how the Tampa Bay Times and Tampa Tribune covered last night’s game, followed by some additional postgame quotes from the Lightning’s locker room…

Stingy Kings defense too much for Lightning (Tampa Tribune)

COACH GUY BOUCHER
(on Kyle Clifford’s goal…) “We have to be aware of the guy coming out of the box. Period. We know the guy’s coming out the box, the timing’s there. Obviously, Hedman almost scored on his backhand there, thought it was going in. I guess everyone was focused on that and we didn’t pay attention to the guy coming out of the box. He got the puck on his stick at the right time. We didn’t make many mistakes tonight, but it seemed like almost every one we made cost us.”

(on Dwayne Roloson’s game…) “I thought he made some good saves. The first goal, it’s the perfect tip—no angle, no nothing; top corner, top shelf. He can’t do anything about that. The second one was on a breakaway and the third one, shot right from the slot—we’re not covering the guy. We didn’t give a lot of shots, we didn’t give a lot of scoring chances. It seemed like the ones we gave hurt us.”

DWAYNE ROLOSON
(on the Kings…) “They’re a very opportunistic team. They tighten down in the defensive zone, you don’t have any openings at all in their zone and you got guys who score how many goals in this league, between Penner, Stoll and Richie [Mike Richards]? They’re out there for the last minute and a half. It shows their scorers are shutting guys down, too. From top to bottom, top line to bottom line, that’s what they do. They limit your time and space, don’t give you chances and capitalize on your mistakes.”

STEVEN STAMKOS
(on the game…) “We needed for them to at least give us some momentum and a couple chances there and we didn’t generate anything, so it’s on us.”

(on the Kings…) “They’re good. I thought we had some chances. They’re a tight-checking team obviously, but I think we had some lapses where it cost us and I thought we had, like I said before, some quality chances, especially early in the game. Either we missed them or their goalie made some big saves. I knew it was going to be a tight-checking game and that’s what it was and we didn’t find a way.”

VINCENT LECAVALIER
(on Clifford’s goal…) “We knew it [Hedman’s shot] wasn’t in, so the horn didn’t really do anything. I guess we’ve got to know that guys are coming out of the box. We got caught. We made a few defensive mistakes tonight, but we had a lot of good opportunities that we could have scored more goals. Quick played a good game.”