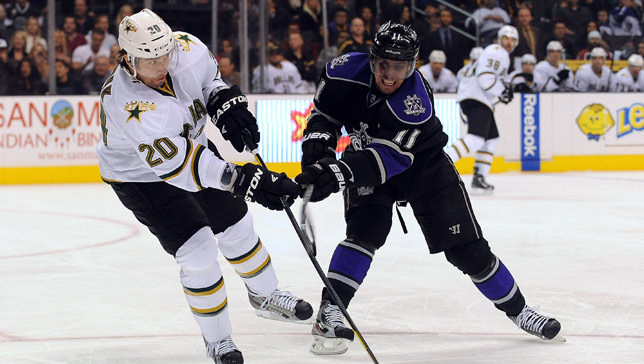 — The Kings lost a wild one, as they fell to the Dallas Stars 5-4 in a shootout on Thursday night at Staples Center.

— The Kings failed to score on any of their three shootout attempts, and Dallas’ Loui Eriksson beat Jonathan Quick in the second round. The Kings are 3-5 in shootouts this season.

— The Kings reached the four-goal mark in consecutive games for the first time this season, and for the ninth time overall this season. The Kings are now 11-0-1 when they score at least three goals.

— Jonathan Quick stopped 34 of 38 shots in regulation and overtime. Quick had allowed a total of three goals in his previous five games.

— Anze Kopitar had a season-high three points — one goal (on the power play) and two assists (both on the power play) — before he had to leave the game in the third period after a big hit from Dallas’ Brenden Morrow. Kopitar is now tied (with Mike Richards) for the team high with 13 goals and has a team-high 27 assists and 39 points.

— Trevor Lewis had one goal, his first goal and second point of the season. Lewis had last scored a goal on March 26 of last season, against Colorado. It was Lewis’ fifth career goal, in his 117th game.

— Justin Williams had two assists, to push his season totals to 20 assists and 27 points. Williams has one goal and two assists in his last two games.

— Brad Richardson had one assist, his second assist and fifth point of the season.