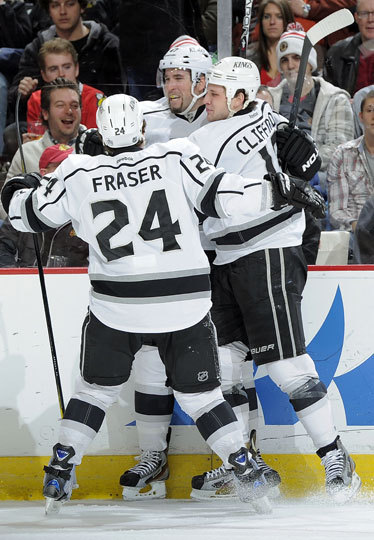 — The Kings recorded a rare victory in Chicago, as they beat the Blackhawks 2-0 on Wednesday night at United Center.

— The Kings improved to 3-0-1 under coach Darryl Sutter.

— Jonathan Quick made 38 saves for his NHL-leading fifth shutout of the season (and the Kings’ fifth shutout) and his 19th career shutout. Quick is 4-0-1 in his last five games.

— Jarret Stoll scored a goal, his fourth goal and 10th point of the season. Stoll had one goal in his previous 13 games.

— Kyle Clifford had one assist, his fourth assist and fifth point of the season. Clifford had gone eight consecutive games without recording a point.

— Justin Williams had one assist, his 17th assist and 22nd point of the season. Williams has one goal and four assists in his last six games.

— Colin Fraser had one assist, his first assist and second point of the season. Fraser had gone 19 consecutive games without recording a point.

— Drew Doughty had one assist. Doughty has recorded an assist in five consecutive games, a new career best. Doughty also has a total of seven assists in his last seven games.

— Mike Richards was stopped on a second-period penalty-shot attempt. Richards is 0-for-2 on penalty shots this season.