Sutter: Why it will (and won’t) work 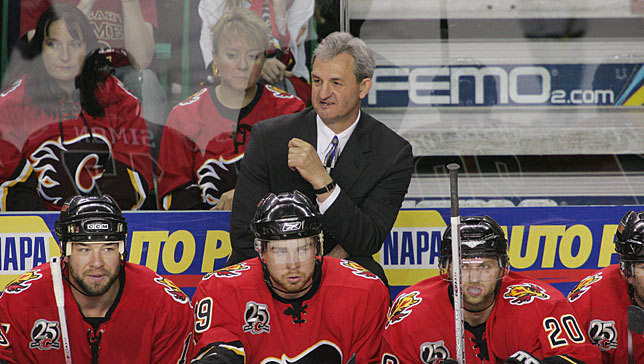 The only pertinent question about the Kings’ hiring of Darryl Sutter is, “Will it work?’’ Sutter is a proven quantity, a veteran NHL coach with a track record, and that can either be seen as a positive or a negative. He has enjoyed success at each of his three coaching stops, including a run to the Stanley Cup Finals with Calgary in 2006, but can he relate to today’s players and today’s game? It’s a critical time for the Kings and for general manager Dean Lombardi, who might be the next to find his job status in question if the Sutter hiring doesn’t work out and the Kings don’t make the playoffs.

Below, I take a look at why the Sutter hiring might work, or might not work. I’ll give three arguments on each side, and let you decide for yourself…

1. Needed passion/discipline
When a player such as Drew Doughty notes that Sutter is known for being a “yeller,’’ and Doughty openly expresses excitement about playing for Sutter, that’s a good sign that it was time for a change. Terry Murray was a fair, consistent coach. It’s not that Murray never got angry — players will privately talk about occasional locker-room bursts — but in general, this just seems like a talented team in need of an attitude adjustment. There will be nothing calm and relaxed about Sutter. He will demand full effort and execution from day one, and it’s hard to consider that a bad thing, given how the Kings have underachieved so far.

2. Past success
Understandably, there were calls among a segment of the Kings’ fan base to hire a young, up-and-coming coach, someone with new ideas who might be able to relate to players better than a veteran coach. But, at this point, the Kings aren’t interested in grooming a coach, having a coach learn on the job. Their window for winning is open now, and a team never knows how long that window will stay open. Sutter’s teams have only missed the playoffs once in his time as coach in Chicago, San Jose and Calgary. Sutter’s experience should pay off, and his reputation means he will have the players’ attention quickly.

3. Hungry to win again
Every former coach, even the most mild-mannered of coaches, has a bit of an ego, and thinks he could get behind the bench and win again if given the opportunity. Sutter didn’t go out on his own terms in Calgary. He chose to go upstairs, and trade in his coaching role to become the Flames’ full-time general manager in 2006, but after four years in which his moves were highly criticized at times, Sutter “resigned’’ in 2010. Sutter should still have the fire to win, and will want to cement a positive legacy for himself. What better way than to lead this underachieving group of Kings to the promised land?

1. Out of touch?
In the past, Sutter’s teams have been known for their grit and their tenacity, their willingness to slow the game down and grind teams into submission. Has that style of hockey gone the way of the dinosaur, though? Almost all of Sutter’s success took place before the 2004-05 NHL lockout, before rule changes opened up — for a while, at least — the offensive game by limiting obstruction. Sutter is very much an old-school coach who will demand structure and hard-nosed play. Is that going to solve their problem, though? Remember, this is a team that scores two goals and hopes it can hold opponents to one.

2. Too much yelling?
Yes, players such as Doughty and Justin Williams have spoken openly and enthusiastically about playing under a coach with “passion,’’ but they’ve also never experienced Sutter face-to-face before. Coaches with “passion’’ — a polite word for “coaches who like to yell a lot’’ — can often have short-term success but also often wear out their welcome when players get tired of being berated for every mistake. This isn’t the old NHL. Players have huge contracts, and star players with long-term contracts know they arguably have more security than the coach. Can Sutter push the right buttons with the 21st-century players?

3. Too late?
Yes, there are still 49 games remaining in the regular season, but the Kings are in a hole. To reach 95 points — usually a reliable number for making the playoffs — they would need 61 points in their final 49 games, the equivalent of a 30-19-1 finish. Impossible? No. Easy? No. Sutter will need time to learn the strengths and weaknesses of his players, and time to make whatever adjustments he feels are appropriate. That will take time, in January, to sort out, and the Kings spend almost all of February on the road. Even if Sutter pushes all the correct buttons, he still faces an uphill battle to turn things around.