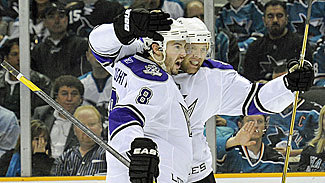 Any analysis of Drew Doughty should start with a flashing disclaimer: “Caution, he’s 21 years old.” In general, 21-year-old defensemen aren’t supposed to do anything close to what Doughty does. Doughty averaged 25 minutes, 39 seconds of ice time per game this season, the fifth-highest average in the NHL and more than top defensemen such as Zdeno Chara, Shea Weber, Mike Green and Lubomir Visnovsky. In fact, among the 13 defensemen who averaged 25 or more minutes per game this season, only 24-year-old Marc Staal of the New York Rangers even comes close to Doughty’s age.

That said, Doughty set a standard for himself last season when, in his second NHL season, he was a deserving Norris Trophy finalist. The presumption was that Doughty, who finished third in the voting last season, might be the favorite for the award this season. Instead, he’s not expected to be a finalist. Doughty totaled 11 goals and 29 assists this season, down from 16 goals and 43 assists last season, and his plus-minus rating went from plus-20 to plus-13. An early-season concussion cost Doughty six games and might have contributed to some tentativeness. Regardless, Doughty has been a different player in the second half of the season, with a handful of brilliant games, many strong games and very few poor efforts. Doughty might have been at his best in Game 2 last night, when he had two goals and two assists, including a brilliant drag-and-shoot power-play goal that gave the Kings a 3-0 lead. Today, both Terry Murray and Doughty gave some in-depth thoughts about Doughty’s season

MURRAY: “Well, whatever I say to you, he’s going to disagree with [smiles]. What we talked many times with him about, between John (Stevens) and I, from the start of the training camp is, `You need to be better,’ basically. And, `You are better. You showed it to us in the past, and that’s where we want you to get to again.’ His feeling was that everything was good. That’s the normal reaction of a young hockey player. I’ve heard those comments back to me many, many times over the years. But you’re always trying to push it to the next level. The one area that was lacking for me was just his skating. He wasn’t jumping with the puck and reacting with the high energy, the explosiveness that we’re seeing in the last half of the season and certainly with the game last night. He was a player that wanted the puck on his stick. He had the attitude that he could make a difference in the game. When he plays with that kind of approach to the game, he can make a difference in any given one of them, because of his abilities.

“That goal that he scored, the second goal, when you just step back and the emotion is out of the game and you replay it and watch it, it’s a phenomenal goal. To do what he did, to get the puck down at that hash mark and put on the brakes and, now, pulling it, skating backwards, holding off, faking a couple of great players in the game and now finding a way to get the puck through to the net, with traffic, and scoring, that’s a pretty special play. That’s what his capabilities and abilities are.”

Question: Did the concussion have something to do with his play early in the season?

MURRAY: “I think it slowed the process down, but I didn’t think — and again, we’re going to get disagreements on this — but coming from the first day of the training camp up until that game — I know that was early in the season — I didn’t think that we had the same player that we knew we had. But that was a setback, there’s no question. When you get hit like that, and coming through the symptoms of that upper-body injury, it does take time. It does put a little hesitancy in your game, and you’ve got to work through it medically and, maybe most importantly, emotionally, to get physically involved again.”

Question: Which kind of player do you think you will get in Game 3?

MURRAY: “Well, again, I think in the last half of the season, we’ve seen this player that we saw last night. Most nights, he’s doing the right things, he’s very energetic, his skating is very good, really moving his feet. We’ll get him again.”

A few minutes later, Doughty shared his thoughts about his season and, in particular, about his Game 2…

DOUGHTY: “In a playoff game, you’re so excited to play and the atmosphere is so crazy. Not that you’re not trying your hardest or anything throughout the regular season, but just motivationally, it’s a lot easier to get up for a playoff game. You’re so excited to play. I knew that we needed that win, and I knew I needed to take over the game and do everything I could to help us win. I just did that and it felt great. We need to do the same thing in the next game.”

Question: How would you analyze your season?

DOUGHTY: “I think, in the first half, I don’t think I was playing bad but I definitely don’t think I was playing as good as I could. Then, the second half of the season, I think I stepped it up. From the last quarter on, I think I’ve played really well. I think I’ve been back in my element, playing good offensively and defensively. So I’m feeling comfortable again. I’m feeling confident — not that I didn’t — but really confident right now, and I just need to play that way for the rest of the season.”

Question: Did the concussion have something to do with the early play?

DOUGHTY: “I don’t know if I would blame it on the concussion. I definitely wasn’t the same when I got back. Not that I rushed back or anything like that. I just, obviously, wasn’t playing the same. I wasn’t jumping into the rush like I had in previous seasons, and stuff like that. Like I said, I wasn’t at my best and I was a little disappointed with my effort in my first half, but I stepped it up in the second half and now that we’re in the playoffs, it’s time for me to be at my best. I guess it’s good that I’m playing better now.”

Question: You and Jack (Johnson) seem to have that playoff power-play thing going again…

DOUGHTY: “I don’t know why we can’t do that during the regular season. I don’t know what we’re doing differently. We love playing with each other on the power play. We think we work together well. We find space for each other to get our shots off. We love playing playoff hockey. We’re going to do everything we can. We know we need offense, in every way possible, because that’s the one area we struggle in. So our power play is huge for that, and we stepped up to the plate last night. Our power play was the changer in that game.”

Question: Can you break down your second goal, from the time you got the puck?

DOUGHTY: “I know that the goalie is going to be off his right post. When I come to the middle, he’s coming from the right post to the middle. I like that shot, my slap shot going top right. I was just hammering it. I had a screen, and I saw that little gap up top. I just wanted to make sure I was hitting the net, and it went in.”