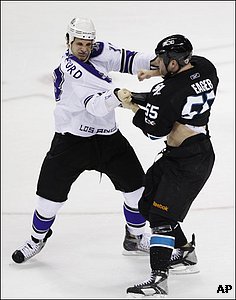 — The Kings opened the playoffs with a 3-2 overtime loss to the San Jose Sharks on Thursday night at HP Pavilion.

— All-time, when losing the first game of a series, the Kings have gone on to win the series five out of 23 times.

— The Kings went 1-for-3 on the power play and 2-for-2 on the penalty. In six regular-season games against San Jose, the Kings scored two power-play goals in 16 chances (both on March 24) and went 11-for-14 on the penalty kill.

— Jonathan Quick stopped 42 of 45 shots in goal. Quick has now played in seven NHL playoff games, and three of them have gone to overtime.

— Justin Williams had one goal and one assist, in his return after missing the final nine regular-season games with a dislocated shoulder. Williams now has nine goals and 18 assists in 46 career playoff games.

— Ryan Smyth had one assist, and now has 26 goals and 29 assists in 88 career playoff games.