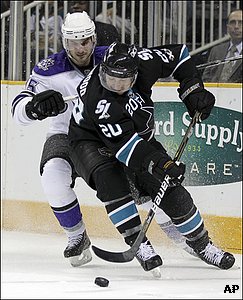 — The Kings missed a chance to clinch a playoff spot as they lost to the San Jose Sharks 6-1 on Monday night at HP Pavilion.

— The Kings’ magic number remains 2, for securing at least eighth place in the Western Conference, meaning that the Kings must earn at least two points in their last three games or have Dallas lose at least once in regulation or at least twice in overtime or a shootout. Dallas hosts Columbus today.

— The Kings suffered their widest losing margin of the season. Their previous worst had come in a 4-0 loss to St. Louis on March 17.

— The Kings finished with a 3-3 record in the season series against San Jose, with two of the wins coming in shootouts. The Kings have allowed six or more goals six times this season, and two of those games have been against San Jose. The Kings lost to the Sharks 6-3 on Nov. 15 in San Jose.

— The Sharks outshot the Kings 35-32. The Kings have allowed 35 or more shots on goal 10 times in 79 games this season, and twice in the last three games.

— The Kings have scored a total of seven goals in their last four games.

— Michal Handzus scored the Kings’ goal, his 12th goal of the season. Handzus has two goals in his last five games.

— Matt Greene had an assist, his ninth assist of the season. Greene has one goal and one assist in his last two games.

— Alec Martinez had an assist, his 11th assist of the season. Martinez has two goals and two assists in his last six games.