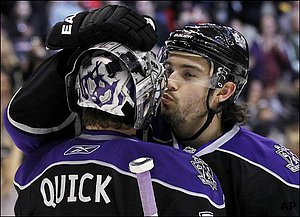 — The Kings suffered a big loss but won on the ice, as they beat the Colorado Avalanche 4-1 on Saturday afternoon at Staples Center.

— Anze Kopitar had a first-period assist, but then suffered a broken right ankle with less than five minutes remaining in the second period. Kopitar is expected to be sidelined for at least six weeks. Kopitar leads the Kings with 48 assists and 73 points and is tied for the team high with 25 goals in 75 games.

— Ryan Smyth had one goal and one assist. Smyth, who had gone 14 consecutive games without a goal, recorded his eighth multi-point game of the season.

— Michal Handzus scored a power-play goal, and has one goal and two assists in his last four games.

— Willie Mitchell scored a goal, his career-best fifth goal of the season. Mitchell has goals in his last two games.

— Drew Doughty had a power-play assist, for his 38th point of the season.