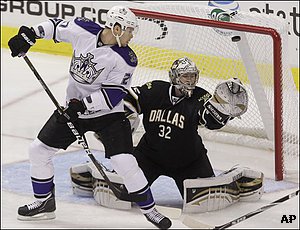 Statistics haven’t necessarily reflected it, but Alexei Ponikarovsky has had a recent string of impressive games. It’s been an up-and-down season for Ponikarovsky, who has dealt with injuries, demotions to the fourth line and, occasionally, time as a healthy scratch, but Ponikarovsky seems to be peaking at an opportune time. He scored a big power-play goal in Detroit last week, and in Dallas on Sunday, he was a part of two big goals. Ponikarovsky assisted on Drew Doughty’s first-period power-play goal, and also contributed when he ran traffic in front of the net as Doughty shot. Then, in the final minute, Ponikarovsky was in good position and pushed the puck to the net, where Michal Handzus knocked in the game-winning goal. Terry Murray, needless to say, was pleased.

MURRAY: “Poni played really good. And not just because of the winning goal. He was on the puck. He used his body really well in those situations down low, recovered quite a few pucks and had great awareness in his own end. That’s where he had a little it of concern in the early part of the year. His D-man was jumping in, and he was just standing there trying to catch him from behind. Now he’s got great awareness, and (he played well) against a team that has a great group of D. They’re very active. They’ve got Daley, they’ve got Goligoski, and those guys are jumping in from the blue line. But I thought Poni was real good as a weak-side winger. That’s the guy who has to have that great awareness.”

Overall, Ponikarovsky’s production hasn’t been what the Kings hoped it would be — he has 12 points, and Sunday’s multi-point game was only his second of the season — but if Ponikarovsky can finish the season strong, in a two-way role on a line with Handzus and Wayne Simmonds, the story can still have a happy ending.

PONIKAROVSKY: “I can’t really be satisfied with what I have. I have to try to get more out of myself and, every day, be a better player. I had a few injuries in the first half of the season, and that takes a lot out of anybody. You just work hard to get back to the point where you can really play good hockey and help the team.”