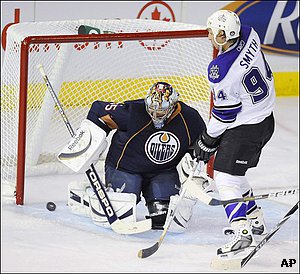 Tomorrow night’s game will be another “homecoming” game for Ryan Smyth. Playing in Edmonton is big for Smyth, because he spent parts of 12 seasons with the Oilers. Playing in Calgary is special because Smyth’s hometown of Banff, Alberta, is only about 90 minutes west of Calgary. At this point, a “homecoming” game is nothing new for Smyth, who turns 35 this month, but it can be an issue for coaches, particularly when teams play in Toronto, because so many teams — the Kings included — have Ontario natives on their roster. Detroit is a big deal for the Kings, for players such as Matt Greene, Jack Johnson and Alec Martinez, as is New York for Rob Scuderi, Dustin Brown and Connecticut native Jonathan Quick. After practice today, Murray talked about the positives and negatives of playing close to home. Murray was an NHL defenseman who grew up in Shawville, Quebec. Ottawa is the closest big city, but it didn’t have an NHL team when Murray played. Montreal, several hours away, is as close as Murray got.

MURRAY: “It’s a special feeling. You’re excited, you’re energized, the adrenaline is pumping and you’re really excited about the game and playing. You want to play well for your family and your friends, and it’s just a special game for you, any time you come back and play in those kinds of situations. With Ryan coming back to Edmonton and Calgary, he’s a popular guy. He’s had great success in Canada and he’s got 1,000 games under his belt in the league. There’s always going to be friends and family that cheer for him, and he wants to play well. He’s a very proud guy, and he wants to have a great game and perform for those people.

“I don’t think it would be (a distraction for Smyth) any more, but certainly early in your career it’s a big distraction. Absolutely. I remember, when I was coaching in Washington, we traded for Sylvain Cote from the Hartford Whalers. Going into Quebec City, Montreal, I would have a meeting with him, because he was a very energetic guy. He was a good player, but any time you get back into those two cities to play, now he starts to play out of character. He tried to put on the one-man show and, as a result, bad things happen the other way. So I always had a meeting with him. `You know where you’re going, lots of family, lots of friends coming, you’re buying tickets, you’re going out to dinner the night before. But the most important thing is to play your game and stay focused.’ And that was early in his career. As you go through it, as a veteran player, you just figure that part out.”