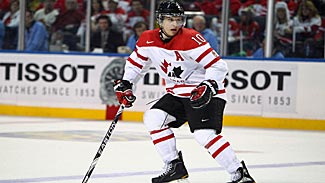 Many of you probably caught the results of yesterday’s World Junior Championship semifinals, but in case you didn’t, Russia and Canada won and will meet in Wednesday’s gold-medal game. The game will be a matchup of Kings prospects, with Canada’s Brayden Schenn facing Russia’s Maxim Kitsyn. Schenn (pictured) leads the tournament in points, with seven goals and nine assists in six games. Kitsyn is second on Russia in points, with four goals and four assists in six games. The United States, with Kings prospect Derek Forbort, will play Sweden for the bronze medal.

As a side note on Kitsyn, following up on an item from a few days ago, TSN reported that Kitsyn will indeed transfer to the OHL after the World Juniors. That’s out of the Kings’ hands, but they would definitely see that as a positive. A further positive? Kitsyn’s presumptive team, Mississauga St. Michael’s, is hosting the Memorial Cup this season, so Kitsyn would get a chance to play on that stage as well.

Eleven of the Kings’ current players have World Juniors experience (in addition to several current prospects). How did they fare? Find out below…