Business as usual for Murray 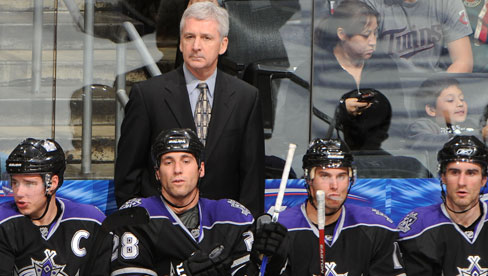 The Kings had a fast-paced, 45-minute practice today, no different than most other between-games practices. There was no “bag skate,” no on-ice screaming by the coaching staff. The only nod to any type of recent struggle was a longer-than-usual post-practice huddle with Terry Murray and the players. Anything else would have been out of character for Murray, who has spent the past two-plus seasons practicing a calm, patient, consistent style. Murray’s predecessor, often-volatile Marc Crawford, was known for his blistering oratory, full of colorful language, but if anything, Murray will go in the complete opposite direction. That’s why Murray said he didn’t give thought to any type of “bag skate” or anything drastic after two losses.

MURRAY: “Those only make me feel better. They don’t make the players feel better. No, I didn’t consider that. I don’t believe in that, but I do believe in getting back to fundamental work and executing the basics of the game on a consistent basis. To me, that’s a part of the problem. I think we’ve gone a long time without any quality practice time, to get into that part of it. The other part, I think also, is just the mental approach to the game, the 60 minutes of total concentration. We got casual at times, and you do that against good hockey players, good teams, and they’re going to take advantage of it.”

Kings captain Dustin Brown, who, amazingly, is one of only a handful of players still around who played under Crawford, said he didn’t expect any type of paint-peeling locker-room blast from Murray, nor did he think it was necessary.

BROWN: “I think everyone was upset last night, but after playing for Terry for the past couple years, I don’t think I’ve ever seen him get to the point where he’s screaming and yelling. That’s not his coaching style. Some coaches handle it in different ways. We all know that we can do better in here. It’s one of those things where, whether he’s screaming and yelling, we all know what needs to be done.”