Kings go with middleweights, not heavyweight 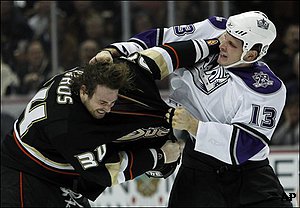 For a third consecutive game, the Kings are expected to go without Kevin Westgarth in the lineup tonight. Given that the Ducks have dressed enforcer George Parros in all but one game this season, it’s likely that the Kings won’t be matching “heavies.” The Kings are expected to go with a fourth line of Trevor Lewis centering Brad Richardson and Alexei Ponikarovsky, and Terry Murray said that with the Kings starting a stretch of four games in five nights, he wants to maintain balance with his forwards in terms of minutes played…

MURRAY: “I’m a little concerned about the physical grit and all that, but what overrides that, in my opinion, is that I need to roll the four lines more consistently, with the heavy schedule.”

Question: The fact that you have a guy like Clifford, who hasn’t been shy about getting involved in physical stuff, does that influence you as well?

MURRAY: “Absolutely it does. Cliffy and Simmer [Wayne Simmonds], both of those guys can play a pretty heavy game, gritty game. And that does enter into the decision as well, as well as the overriding factor, which is the scheduling and the importance of having four line playing pretty regularly.”