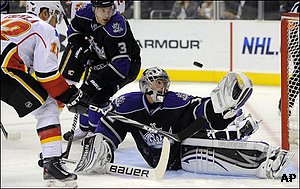 — The Kings won their third consecutive game by beating Calgary 2-1 on Thursday night at Staples Center.

— Under coach Terry Murray, the Kings had been 1-8 against Calgary and had totaled only 12 goals in those nine games.

— Kyle Clifford scored his first NHL goal, in the first period of his 22nd NHL game.

— The Kings went 1-for-6 on the power play and 2-for-3 on the penalty kill. The Kings had been the NHL’s only team not to allow a power-play goal at home this season. They had been 45-for-45 until Olli Jokinen’s third-period goal.

— Dustin Brown assisted on Anze Kopitar’s goal and has an assist in three consecutive games.

— Jack Johnson also assisted on Anze Kopitar’s goal, and Johnson is now tied for the team lead with 15 assists.

— Anze Kopitar, Dustin Brown and Ryan Smyth each had four shots on goal. Brown was credited with a team-high six hits while Alec Martinez and Smyth were each credited with two blocked shots.