Kings General Manager Rob Blake spoke to media on an extended call yesterday and covered a variety of subjects, including several Ontario Reign related notes. For Part 1 of the call from an LAKI perspective, click here…with more to come!

Blake talked about a trio of young defensemen – Mikey Anderson, Kale Clague and Tobias Bjornfot – who each played both AHL and NHL games this past season, as possibilities on next season’s LA Kings blueline.
Bjornfot began the season with the Kings, before he settled into an important role on the Reign’s top pairing alongside Paul LaDue. Clague took enormous strides after a slow start to the season, working to improve his defensive game and showing the puck moving and skating gifts he’s been touted for, en route to an AHL All-Star Classic appearance. Anderson was a steady, reliable defenseman for Ontario into late-February, before he earned an NHL recall and impressed by all accounts in his short time with the Kings.

“You saw Mikey Anderson, a very short time but very well trusted by the coaching staff, so we fully envision him making that jump to the NHL,” Blake said. “We got a little sample of Kale Clague at a different time this year, early in the season, starting on the Buffalo trip, so there’s potential there, and obviously with Tobias Bjornfot. The season he had at that age in the American League and the amount of games he played, minutes wise, with the World Juniors, and he seemed to get better and handle everything. We got to see him in early games in the season and probably understand where he will fit into our lineup shortly.”

The Reign will be YOUNG next season
And, here I was, thinking that the 2019-20 Reign were a young team! Blake noted on the call that he expects the Ontario roster for the 2020-21 season to be even younger than it has been. The Kings organization has undergone an immense turnover on the prospect front over the last couple of years. Only five players (including a three-game cameo for Mikey Eyssimont in 2018) have played games for the Reign over each of the last three seasons, with forward Brett Sutter being the only player to have played exclusively with Ontario in that time. Boko Imama has also been a Reign regular, while Matt Luff and Cal Petersen have spent time with both the Kings and Reign.

Blake listed six names on yesterday’s call – Samuel Fagemo, Akil Thomas, Aidan Dudas, Tyler Madden, Alex Turcotte and Cole Hults – as first-year North American pros who could start the season with the Reign. Factoring in also defensemen Jacob Moverare and Markus Phillips, who are also eligible to make the full-time transition to the AHL, as well as goaltender Jacob Ingham and that’s a group of potentially nine new professionals, to go along with steady groups of what will be second and third year pros that could return.

Blake singled out Eyssimont and Matty Villalta as players that took strides last season
Not to say there weren’t several players who did take strides, but two that were pointed out were Eyssimont and Villalta.

“Mikey Eyssimont really made a step forward with some opportunities to play in different situations,” Blake said. “I thought the other thing was when Cal Petersen went up, Matty Villalta really got more time in the net and really took charge of that.”

Eyssimont jumped from 20 to 28 points, in seven less games played, and was overall a more consistent player in his second full professional campaign. Eyssimont featured prominently on the penalty kill, and was a trusted player in all situations. After an impressive training camp, he had an up-and-down start to the season, before he was a healthy scratch on November 30. After that day, Eyssimont collected 21 points from his next 29 games played and was a big part of the Reign playoff push down the stretch.

Villalta began the season essentially as a rotational backup for Petersen, along with Cole Kehler. He played just 20 AHL minutes in the Reign’s first 17 games of the season, before he earned select starts between the end of November and early February, impressing in limited action. Once Petersen earned his recall, Villalta took over the net, impressing with his composure and moxie for a 20-year-old in his first professional season.

Additionally, Blake mentioned that he expected Rasmus Kupari “to take that role” during the second half of the season and be a part of that group. Kupari suffered a season-ending injury at the World Juniors which prevented that, but you could see the strides in his game prior to that injury.

Don’t underestimate Brett Sutter’s presence with Ontario
Blake was also quick to point out the valuable role that Ontario Captain Brett Sutter plays for not just the Reign, but the entire Kings organization.

“We supplemented [our young lineup] very well with some veterans, Brett Sutter obviously does a tremendous job, not only adapting those kids, but showing them what to do every day,” Blake said. “You can’t ask for much better than what we get out of him.”

If you follow the Reign, this isn’t new news, but it can also be easy to lose sight of the importance of having quality, veteran leaders at the AHL level. As a player himself, Sutter is no slouch, just one season removed from a 21-goal campaign. During the season, Reign Head Coach Mike Stothers called Sutter “the epitome of a captain”, who steers the ship for the Reign.

“He means everything to our hockey club, and he’s the leader of our hockey club…I know he’d probably like to have more points on the board, more contributions in the goals total, but it’s not always about that,” Stothers said in February. “It’s about how he conducts himself and how he makes sure that everybody on the team is looked after, and how he makes sure that everybody’s doing the right thing. He’s the epitome of a captain.” 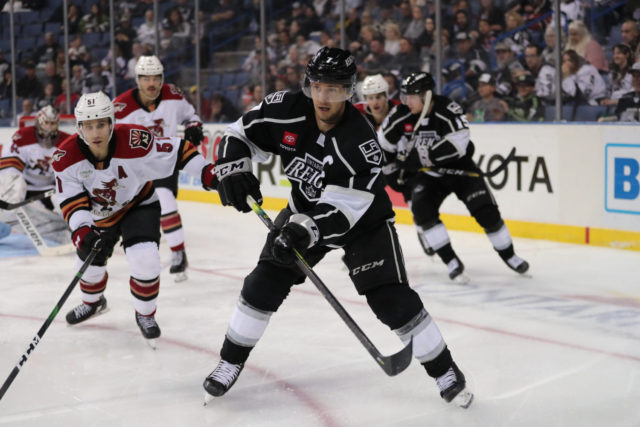