INSIDERS. A few team notes and reflections from a lively skate. Stick taps to Insider Emeritus Jim Fox for standing in for the Todd McLellan and Anze Kopitar scrums, which began after LAKI had to jet from El Segundo. Click here for notes on the life at today’s skate and the lines and pairings that give a pretty good hint towards what we could see against Toronto on Thursday. 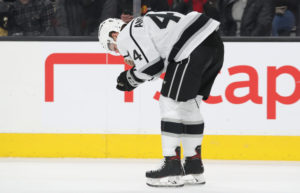 — Mikey Anderson didn’t lose any teeth in Vegas when Max Pacioretty’s second period shot ramped up his stick and into his mouth, nor were any teeth – and this might be an unsettling term, but one necessary to accurately describe the nuances of NHL edentulism – “pushed back,” as they say.

“No, everything’s in place,” Anderson said. “One’s just a little sore, but nothing moved. Everything was pretty lucky.”

Anderson credited a retainer built in when he’d previously worn braces for keeping his teeth firmly in place. Still, seven stitches were required to close Sunday’s cut, an incident that preceded a third period collision in which his visor came down and cut his nose, necessitating maintenance the after-effects of which were still clearly visible. “Tough day,” he said, smiling. It’s hard to find him not smiling, really.

But it was still a jarring moment in his fifth career NHL period when he was quickly scheduled for two highly efficient doctors visits, one in the aftermath of the injury and the second during intermission.

“I came back in [to the dressing room], and they just put strips over it to get me through the period because there were seven minutes left, so we just did that, and right after the period they came in and did stitches quickly in the intermission and then I was good to go,” he said.

Through two games and an impressive 37-minute haul of action, Anderson has been on the ice for one goal for, one against, and has registered one shot. He spent over three minutes of time on the penalty kill in Vegas and showed an ability to transfer his game to a higher level by making his same familiar quick reads and simple touches.

“Yeah, I feel like I’m keeping it simple, playing to my strengths just moving pucks, defending well,” he said. “Obviously, it’s a little bit of an adjustment. You’ve got to make plays a little quicker. But after two games I feel like it’s adjusting pretty well and you try and keep moving forward.”

— Nothing new on Jeff Carter (lower-body). “Back to therapy,” Todd McLellan said. “I saw him this morning and he’s working hard, but it’s just he’s gotta get healthy.”

— I had to step out before Anze Kopitar spoke, but I’ve been interested to hear how he’s handling the final weeks of a season in which the Kings don’t have anything to play for but are playing some good hockey, aren’t getting burned as badly by mistakes and are certainly receiving their best goaltending. Last year’s team did not respond well to the trade deadline, but this season’s team has won three straight since its passing and is 6-4-1 since the Kyle Clifford/Jack Campbell trade.

They’ve actually been outscored 30-28 over that span, producing a 48.3% 5×5 expected-goals share and the 27th best shots-for rate, a bizarre inverse of their traditional (non-) opportunism and a reflection of how great Jonathan Quick and Cal Petersen have been.

“Well, we’ve been managing to score some goals,” Kopitar said. “It’s obviously a little bit easier when you have two or three on the board instead of one-nothing games and two-one. We’ve been playing pretty solid. There’s obviously room for improvement and all of the above, but we’ve been a solid team lately. I think Quickie and Cal have played really, really well for us lately, and the special teams have been a big part of this run. Our PK has come a long way since the start of the year. The power play has been pretty good since January, I believe. It’s all that. We’ve turned the corner at the start of the year – we were trending in the right direction, we just couldn’t pull it together. We’ve talked a bunch of times on how we’d play 50 solid minutes and then those 10 minutes killed us, and now we seem like those lows are not as low. It’s one of those things – bend but not break. And kudos to Quick and Cal – as I’ve said, they’ve bailed us out numerous times, and we’re just able to build off of that and get going again.”

— With the Maple Leafs in San Jose tonight and scheduled to practice at Toyota Sports Performance Center on Wednesday, there were naturally some Clifford and Campbell-related queries. “Soupy was my carpool partner, Muzz was my golf partner, Cliffy was sitting right next to me [in the dressing room] every time, so it’s going to be a little bit emotional, for sure, especially for them coming back and us playing against them,” Kopitar said.

McLellan, who has coached in the Pacific Division exclusively in his NHL head coaching career, is slated to face Clifford for the 60th time on Thursday – a span that previously included 39 regular season and 20 playoff games – and spoke about his “outstanding” performance while their tenures overlapped for two-thirds of a season.

“I remember bringing him in early in the year, and the first thing I told him was ‘I appreciate what you do,’” McLellan said. “It’s not an easy job playing the role that he plays, and he does it, and did it very well for us and I’m he will for them. But he had a presence in the room with the younger players, he worked on his game, he was proud of the game. Didn’t take any grief from anybody, he went out early and worked on it. When I look at his career, it took off and then it probably slowed down a little maybe with injury and now he’s back up and running. He’s the type of player that most teams want. Obviously, he’s in Toronto now, so they wanted him. He’ll help wherever he ends up.”

— Another McLellan evaluation of Matt Roy, whose game has taken off and has remained steady since a shaky first week spurred a sit-down: “We were joking the other day, I don’t know if I’ve brought him in and talked to him [since]. I should probably tell him what a good job he’s doing, but I don’t think I’ve talked to him since then about his play. He’s done such a good job. Whatever he got going after about game three or four was really good and just steady. We talk about all the adjectives we use for Kopi, I’d use them for Matt the whole year. I’ve been asked so many times [Ed.: Guilty!] – just steady, calm, physical, shot, passing, shot-blocking, penalty kill and perhaps as we go forward some power play time, we’ll see. But I’m happy he’s on our team.”

— Lastly, thank you to Munty, and to Player X, for the incredibly thoughtful (and timely) headwear.