Statue, banner reflect permanence, and that means a lot to Bob Miller 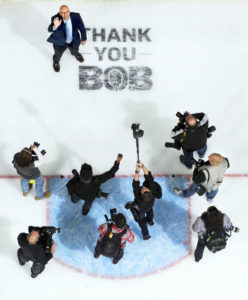 For Bob Miller, there has been some recent vacation time mixed in a victory lap to commemorate a beloved, Hockey Hall of Fame career. There was a summer trip to Winston-Salem to receive the Lifetime Achievement Award from the National Sports Media Association, which allowed some time to visit his brother and his wife in Charlotte. After that, he and his wife Judy flew to Boston to take a cruise to Maine, back down the coast past Newport, Rhode Island and out towards Cape Cod. There was a family wedding in Wisconsin in September before a very unfamiliar trip took part during – gasp! – hockey season.

“We took a personal vacation and we went to Hawaii. And it was weird to be going on that vacation knowing the Kings are playing and the games are on, but it was enjoyable,” Miller said.

While poolside in Hawaii – a setting practically synonymous with enjoying retirement – he received word that the Kings had won a thrilling game in overtime over the Bruins.

“That night they replayed it,” Miller said. “We were in our condo, and I said, ‘let’s watch the game!’ So, it gets down to, as you know, nine-tenths of a second to go with a faceoff, and I said ‘somebody gave me some bad information. They told me it was overtime, not [a shootout], so they must’ve been wrong.’ And then, of course, the faceoff, and Toffoli’s goal. Unbelievable.”

It’s that aspect of a live event that Miller misses: the unpredictability of a live event and the joy of articulating the action to viewers through his giddy excitement that made all within his radius, whether they knew him personally or not, feel like he was their close friend. That a friend was sharing stories and spreading the to-the-second happenings of Los Angeles Kings hockey. It’s that ability to draw listeners in and passionately depict the highs and lows – and there were quite a few lows in which his ambassadorship smoothed over extended periods of earlier organizational volatility – that made him such a fixture in Southern Californian airwaves.

But there are also challenges in the daily preparation as a hall of fame broadcaster that he does not miss. The late nights and early mornings ensuring that telecasts on the second night of a back-to-back met his own high expectations became more of a challenge as he became older.

“I was always someone who took that time,” Miller said of his preparation. “As somebody said, the time devoted to preparing for those telecasts should be about the same length of time that you’re on the air. Maybe three hours or more.” On one hand, there was the regular memorization of player names and numbers and creating and editing flash cards, and on the other hand was the potential to spend time with Judy in Hawaii relaxing and serving as a club ambassador.

With health challenges having emerged over recent years – he underwent quadruple bypass surgery in January, 2016 and suffered a mild stroke at All-Star Weekend at Staples Center one year later – the preparation gave way to curtailing his broadcasting responsibilities and segueing towards his new role. 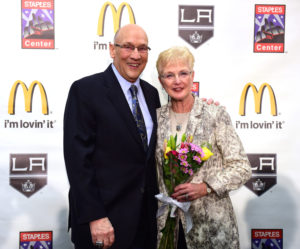 He and Judy are still Staples Center regulars who entertain friends at family at Kings games. Some of those friends are actually still working during the games, and it’s not uncommon to see Bob and Judy joining the team’s table in the Chick Hearn Media Room while also stopping at the visiting broadcasters’ table when other close friends and colleagues pass through town.

Without regular broadcasting responsibilities, Miller is free to articulate to those within earshot what he really thinks about particular plays. That was never an issue with Miller, whose honesty – which includes the occasional and often humorous frustration at particular developments – always illuminated club broadcasts. “I get more upset now watching the team if something doesn’t go right than I ever did when I was on the air,” he said.

“The other team could score a goal and I wasn’t happy about it, but you’ve got a job to do professionally on the air,” he continued. “Now, when I don’t have to worry about that, I can sit there and sit at home and watch the game and say things I couldn’t say on TV. So it’s kind of an outlet, you know?”

And, on Saturday night, he’ll again be overjoyed to hear over 18,000 Kings fans serenading him with love as a statue is erected at Staples Center’s Star Plaza before the first non-player banner in organizational history is unfurled from the rafters inside the arena.

Such a talisman is particularly meaningful to Miller because, as he articulated, “it will be there forever.”

“The plaque in the Hockey Hall of Fame—you know, that that’s going to be there,” he said. “And maybe a lot of people will never know, ‘Who is this guy? I never heard him.’ But you’re there and you’re in something that is permanent. And that’s the way I feel about the Hollywood Boulevard star and the statue Saturday night and the banner going up in Staples Center. You know, those are things I never ever dreamed would happen and those are, in my mind, where once I’m gone and your descendants can go down and it’s proof to them that I was there and had a 44-year career. And I think that’s important that those are going to be there for so many years, and they’re permanent.”

That’s the tangible permanence. The more abstract permanence is reflected in his association with legendary Southern California sports broadcasters such as Vin Scully, the late Dick Enberg and Hearn whose golden age television and radio encapsulations carried such weight and influence on Los Angeles sports culture. For Miller, his presence, and his statue outside Staples Center, fits right in.

Tonight Bob Miller will join these other greats Luc Robitaille, @OscarDeLaHoya @MagicJohnson @kaj33 Kareem with a statue outside Staples Center. Bob, the great HOF announcer for @LAKings will also have a banner on the wall inside Staples. I will be honored to be there pic.twitter.com/ib6Us7ugC1

-Lead photo via Juan Ocampo. The timing of tonight’s ceremonies can be found here.