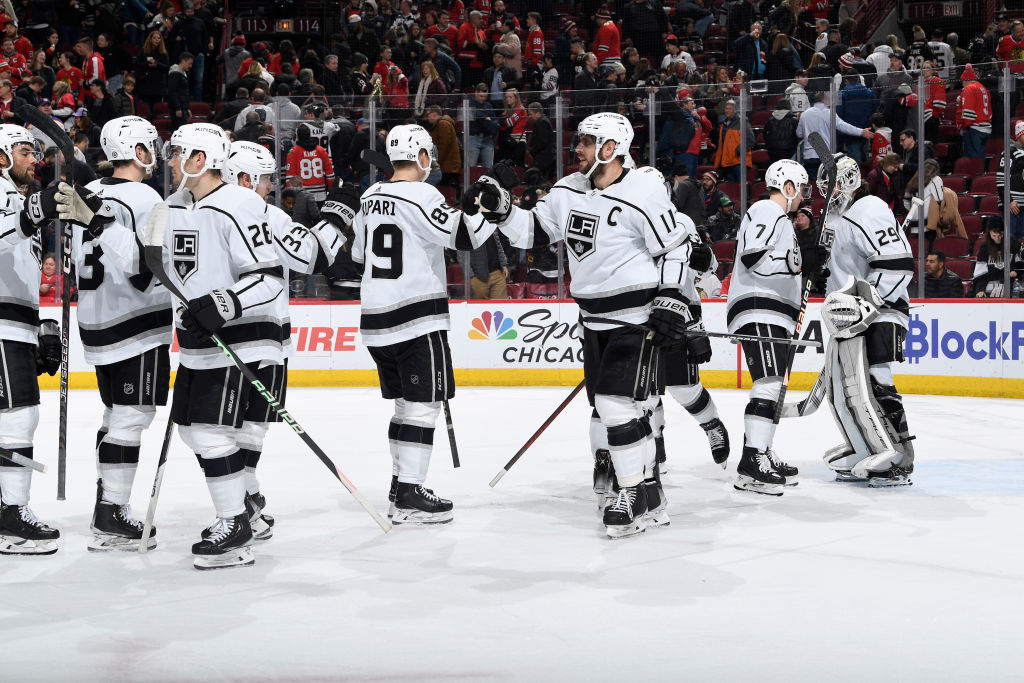 Against the Predators on Saturday evening, the Kings deviated from a gameplan they executed so well during the 39 minutes that preceded. They gave up a power-play goal against to tie the game, as they surrendered three goals in total in a 5-3 defeat. As Todd McLellan put it, that’s not something that good, playoff teams do. Sunday in Chicago was not perfect by any stretch, but the Kings took care of the business they needed to. A lack of finish throughout the night made the game closer than it needed to be, compounded by a late goal against, but the Kings were generally tighter in the third at United Center, which minimized the high-danger chances against.

On Saturday, the Predators had six high-danger chances in the third period alone, with all three goals against coming off of those Grade-A looks. On Sunday, the Kings ceded just one high-danger chance against in the final 20 minutes. Though Todd McLellan felt the group backed off too much in that period, which was evident when compared to the first 40, the Kings were solid enough defensively in doing so, leading to the win.

Perhaps a low-event win was just what the team needed?

Over the last 12 months, the Kings have not let losing streaks fester and develop into a long run of defeats. The last losing streak of four games or more games came in November of 2021, with the Kings limiting their runs of poor form to the three-or-shorter variety since. The Kings don’t necessarily aspire to play low-event hockey. They do aspire to play responsible hockey and winning hockey, above all else. Perhaps it’s a low-event game that could get the ship righted, however, and the defensive side of the game was taken care of for the most part yesterday.

Last night’s game in Chicago saw the Kings allow just five high-danger chances all evening long, their lowest total of the season to date. Expected goals allowed was a Top-5 performance as well, as was scoring chances against. On the road, staring down the possibility of a four-game losing streak, the Kings tightened the screws defensively, and tightened them strongly for most of the night.

On the other side of the coin was what made last night’s game closer than it should have been. Natural Stat Trick had the Kings at 3.79 expected goals at even strength, the highest total of the entire 2022-23 season. Now, it’s important to label two qualifiers. One, there was just one power play, so there was a lot of even-strength hockey played, and two, the Kings had two good looks at the empty net which they did not bury. The Kings wound up nearly two goals higher in expected goals compared to actual output. Numerous high-quality looks were generated but not finished. The former is encouraging, the latter less so.

The exception to the rule last night was the team’s third line, which was responsible for both goals scored. Both were tallied by Jaret Anderson-Dolan and both carried primary assists from Kevin Fiala. Fiala played more the role of shooter against the Predators, a Top-5 game for him this season in terms of individual scoring chances for, but he came up empty. In Chicago, he took on the role of creator, with his pass on Anderson-Dolan’s second goal specifically standing out. Fiala was on the ice for nine high-danger chances in Chicago, a season-high. A stick tap has to go Anderson-Dolan’s way as well. Lots said about him after the game yesterday, as shared in the post-game recap, but for a player who embraces the dirtier side of the game, taking pride in checking and defending in late-game situations, it was great to see him get rewarded with a pair of heads-up goals. Good on ya, JAD. They were both certainly needed last night.

The Kings now turn their attention to the Eastern Conference for the remainder of the trip, with the final four games coming against opponents from the East. The Kings were dominant in inter-conference play a season ago but they’ve struggled so far in 2022-23, winning just 8 of 19 games played versus the East. Each of the upcoming games will be rematches, with the Kings looking to avenge defeats to Philadelphia and Carolina, while they’ll play for a season sweep versus Florida and Tampa Bay. A season ago, the Kings had 49 points against the East, the second best mark in the Western Conference……they were equal to of greater than six teams that actually played in the East, which is pretty astounding when considering the games played disparity. A good opportunity to build on this season’s mark, as the team looks to head into the All-Star break on a positive note.

No practice today, Insiders, but a look later in the day at how the Kings are compensating for four injured players. Gabe Vilardi has returned to Los Angeles and is unlikely to return to the group on this trip, which takes the team’s second leading goalscorer out of action, likely at least through the All-Star break. With four games to go in that span, others will need to help fill the void. A look at how the Kings are trying to do that, coming up this afternoon.