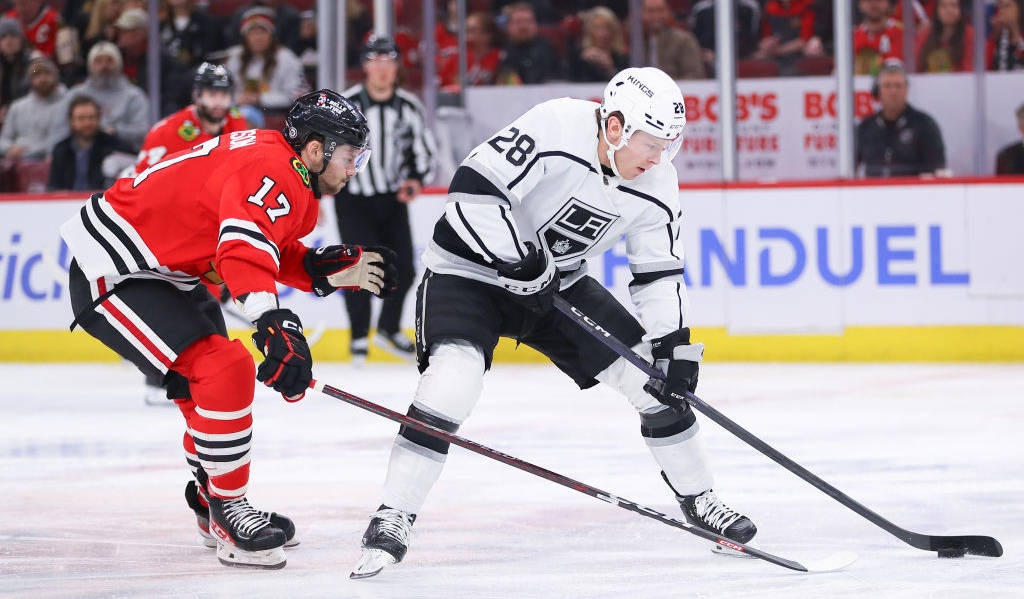 The LA Kings evened their record on their six-game roadtrip with a 2-1 victory over the Chicago Blackhawks on Sunday evening at United Center.

The Kings got two goals from forward Jaret Anderson-Dolan, both off of primary assists from forward Kevin Fiala, in what was Anderson-Dolan’s first two-goal game in the NHL. Goaltender Pheonix Copley earned his 13th win of the season with 18 saves in net.

The Kings scored the lone goal of the first period through Anderson-Dolan, taking a 1-0 lead into the first intermission. Anderson-Dolan fed Fiala on a breakaway, which was kicked out by Chicago netminder Petr Mrazek, but the Calgary native followed up on the play and put home the rebound for his fifth goal of the season.

Anderson-Dolan was the scoring catalyst in the second period as well, as he picked up his second of the night to put the Kings ahead by a pair. After an extended shift in the offensive zone, Fiala found Anderson-Dolan walking into the slot, where he finished with a quick release for the multi-goal game, his first as an NHL player.

After a third period that was largely without a ton of offensive opportunities, the Blackhawks finally got on the board with just over three minutes to play in regulation. After a long shift defensively, the Kings were forced into an icing and Chicago won the ensuing faceoff back to defenseman Ian Mitchell, who scored blocker side on Copley to snap the shutout, his first goal of the season.

The Kings held on for the victory, however, to improve to 1-1-0 through two games of the trip.

"Winning's all that matters & it was a big one tonight"

On how he felt the team played tonight to snap a three-game skid
I think we played with a little bit of attitude. It’s obviously frustrating going on a little bit of a skid there, but coming off a back-to-back, we got an effort that was big for the group. Now, we move to the next one.

On the performance from the team in front of him tonight, particularly with shot blocks
It was a lot of blocked shots, Durz had an amazing one in the second and the PK had a bunch as well. That’s something that we feed off of and it gets everyone going. When guys are doing that, everyone kind of gets going and it fires everybody up.

Alex Turcotte
On coming up through the system with Kupari and Fagemo and playing with them tonight
Yeah, it’s obviously pretty cool. We all kind of came in around the same time, so I want them to do well and they want the same for me, so we can push each other and help each other each day and help the team, it’s only going to help us going forward. I definitely feel pretty comfortable playing with them, just because I know them so well off the ice. It felt pretty good.

On feeling more comortable in his second go-around at the NHL level
I think I felt really good, definitely more confident this time around, compared to when I played my first game a little over a year ago. I just tried to be effective in the minutes I was given and help the team in whatever way I can.

On playing in the United Center as an NHL player for the first time
Yeah, it was a dream come true. You know, when they started singing the national anthem, I remember coming to games growing up as a kid and that’s kind of what they’re known for, I kind of got goosebumps. I was just really excited, I have a lot of friends and family here, I know I had a lot of fun out there.

Todd McLellan
On correcting some of the issues from the third period last night in tonight’s game
I think tonight was an example of where one game affects the other. Last night, we had that lead and we didn’t manage it real well. Tonight, we managed it better but we took our foot off the gas so we’re still trying to figure that out. We made much better decisions tonight in a lot of different areas that allowed us to come away with the win.

On the improvements he felt the team made from the game in Nashville
We were better in a lot of areas, if you’re going to compare it to the night in Nashville. I thought we were tighter, we checked well for two periods, we broke out quite clean. Those were all real positive signs. Had we finished, again much like last night, on many more opportunities, a couple breakaways and we had some looks earlier in the game, I think we would have been in a much more comfortable situation than we were at the end, but in any case, we’ll take the win.

On seeing Anderson-Dolan get rewarded with two goals tonight
For him in particular, for the group, they pull for this kid. They see him work and they see him do all the things he needs to do to be ready all the time. To get the two goals, the coaching staff is obviously happy for him, the players are really happy for him. He’s become a big factor and has a big impact on our team.

On getting the bounceback game from Pheonix Copley
Certainly. We believe in both our goaltenders right now. Sometimes the plan doesn’t go as it’s set out. We planned to play Pheonix in Nashville and Quickie here in Chicago, but it changed. Quickie got basically the whole game, Phoenix got his here, so happy for bot of them.

On the performance he got from the Kupari – Turcotte – Fagemo line
Minutes, trusting minutes. I thought they were really good, they played with energy, they hounded pucks, created some scoring chances, checked. We trusted them the whole night, there wasn’t a shift where you didn’t feel good about them.

Notes –
– Jaret Anderson-Dolan recorded his first career multi-goal game with his fourth and fifth goals of the season. Of his five goals, four have come on the road.
– Kevin Fiala collected a pair of assists for his team-leading 14th multi-point effort of the season, increasing his point total to a team-high 49 points (16-33-49). The last player to record at least that many multi-point outings in their first season with the Kings was Anze Kopitar (16 times) in 2006-07.
– Blake Lizotte tallied an assist to eclipse the 20-point mark (7-13-20) for the third time in his career.
– Drew Doughty collected an assist on Anderson-Dolan’s second-period goal, as he moved to within four of 600 points for his NHL career.
– Pheonix Copley stopped 18-of-19 shots for his 13th victory of the season, improving to 13-3-0 on the year. Since his season debut with the Kings on December 6, no goaltender has more wins in the league than Copley.
– Alex Turcotte made his season debut for the Kings, recording 8:10 minutes of ice time and one shot. An Illinois native, Turcotte played in his home state for the first time in the NHL.

The Kings have a scheduled off day tomorrow, considering the back-to-back. The team will return to the ice on Tuesday in Philadelphia for morning skkate at 11:30 AM at Wells Fargo Center.