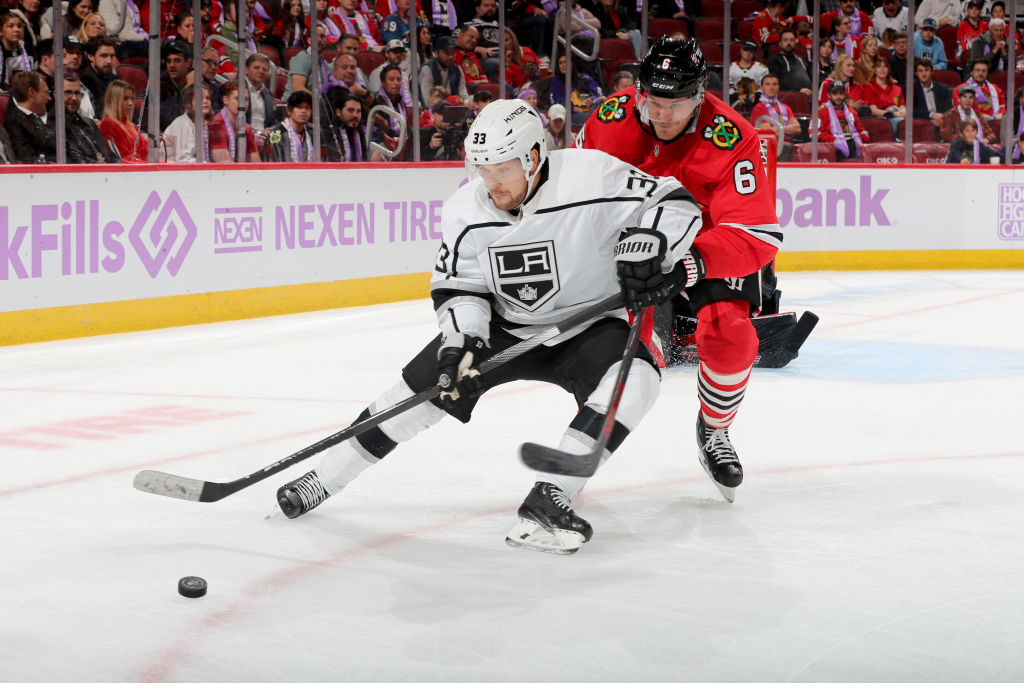 TONIGHT’S MATCHUP: The Kings are in Chicago this evening to finish off a back-to-back set against the Blackhawks.

HEAD-TO-HEAD: Forward Phillip Danault leads the Kings with two points (1-1-2) from two head-to-head matchups with the Blackhawks so far this season. Forwards Kevin Fiala and Blake Lizotte have also scored versus Chicago, with Lizotte tallying the team’s lone goal at United Center in a 2-1 overtime defeat back in December.

KINGS VITALS: Considering the back-to-back, the Kings did not hold a morning skate in advance of tonight’s game.

Will be interesting to see which goaltender gets the nod here in Chicago. Pheonix Copley was pulled less than 60 seconds into yesterday’s game in Nashville, with Todd McLellan calling it a move made because the Kings needed to try something to change the momentum of the game.

“[Quick] gave us a boost, we had really nothing else we could do to change the momentum, we needed a little bit of time. [Quick] played well.”

Quick played nearly 60 minutes yesterday, but should he get the start again tonight, he carries with him a 16-16-3 career record versus Chicago, with a .913 save percentage and a 2.51 goals-against average. Should the Kings turn back to Copley, who played just 39 seconds, he has faced Chicago once in his NHL career, as he made 14 saves on 17 shots in relief back in 2019.

No morning skate today, so no opportunity to make any observations as it pertains to a potential lineup for this evening in Chicago. For reference, here’s how the Kings aligned yesterday evening in Nashville –

Forward Gabe Vilardi has missed the last two games, including yesterday’s in Nashville, and is currently day-to-day. Should Vilardi not be able to go again tonight, the Kings have two other options in defenseman Tobias Bjornfot and forward Alex Turcotte, who both took the pre-game warmups yesterday evening.

BLACKHAWKS VITALS: Chicago enters tonight’s game playing its best hockey of the season, with wins from six of its last seven games coming in.

Goaltender Jaxson Stauber, son of former Kings netminder Robb Stauber, made his NHL debut yesterday evening in St. Louis, so we’ll assume Chicago turns back to veteran Petr Mrazek tonight against the Kings. Throughout his NHL career versus the Kings, Mrazek is 3-1-1, with a .963 save percentage, a 1.18 goals-against average and one shutout.

Ben Pope of the Chicago Sun Times, here’s how the Blackhawks lined up yesterday in St. Louis –

Yet again, only change is the Mitchell/Phillips 6D rotation

Chicago also played last night on the road, a victory in St. Louis over the Blues. Former Kings Jack Johnson and Andreas Athanasiou are expected to be in the lineup this evening for the Blackhawks. Since January 6, when Chicago began its run, defenseman Seth Jones ranks second in the NHL in points by a defenseman with 10 (2-8-10).

Notes –
The Show Must Go On
Since the midway point of the 2021-22 season, the LA Kings have not lost four games in a row. The last time it happened was November 2021, one of two four-or-more game losing streaks in the first half of last season.

Naturally, that stat is baked into the fact that the Kings improved drastically as a whole towards the second half, transforming into the team we saw down the stretch. Now, in 2022-23, the team has yet to lose four games in a row, coming no closer – until now – than three consecutive losses in November. There’s not necessarily a secret sauce to avoiding losing streaks, but the Kings will do their best to do so.

“I think leadership’s important in these moments and the ability to settle things down and focus on what’s really important,” McLellan said. “If we approach the game from a pure scoring mentality, we’re going to leave our goaltenders hanging out to dry and it’s not going to work.”

They’ll have to do so today on the second half of a back-to-back set here in Chicago, though it’s no disadvantage, as the Blackhawks also played yesterday evening on the road. Tonight’s opponent is returning home from St. Louis, in what is a bit of an atypical circumstance for a home team. Not exclusively, but traditionally, back-to-backs are typically done by the team on the road, coinciding with travel in chunks. The Kings have played in five this season to date and will face another next week in Florida.

In order to have success, the Kings will have to get back to playing their brand of hockey and they’ll need to find a way to do it for 60 minutes. We saw last night what can happen when it’s committed to and we saw what happens when it wasn’t. The momentum swings of a game were quite prevalent and McLellan knows the Kings will have to commit to that approach against a team playing quite well right now.

“The one thing that worries me a little bit is early in the year we were quite stubborn with it,” he added. “We talked about it and talked about it, I thought we had figured it out, obviously it’s got to weigh on us a little bit again. Tonight will be a big test, this Chicago team can score right now, they’re putting up almost four goals a night, won six of seven. Very good often rush, creative off the rush, so if we have the same approach, we’re going to have a tough time winning.”

Despite a game in which the Kings were quite disappointed with the overall output, the praise was present for young Quinton Byfield, who had himself quite a night in Nashville. First, the power-play goal, which showcased a ton of poise from number 55. Despite all four Predators defenders converging on him in the slot, Byfield took his time on the play to gather the puck, spin and look for the hole, rather than just quickly put it back on net. The result was his second goal of the season as he made it five points (3-2-5) from three career games against Nashville.

“Q has been I’ve been on that line consistently for the last two and a half to three weeks, we moved him last game onto a different line and put them back,” McLellan said. “I think he fits that Kopitar line well, we get some good minutes out of him, you can see him growing up in front of us right now. He seems to be a real confident young man which is important for us.”

As McLellan noted, Byfield was back on a line with Anze Kopitar and Adrian Kempe last night, after the team opted to move things around a bit versus Dallas on Thursday. Byfield has found a home on that line playing on the wing and turned in another strong performance yesterday evening. That line held a 7-5 advantage in scoring chances, though they were even in high-danger opportunities, with the output being two goals for and one against.

Kopitar and Kempe have seen an uptick across the board when it comes to possession metrics with Byfield on their line compared to without. While their shot attempts both for and against are lower with Byfield, meaning lower-event, but less risky, they’ve seen a massive uptick in high-danger chances created, with nothing lost against. That’s led to a massive uptick in goals for on a per/60 basis, with almost identical totals in goals against.

Speaking with Kopitar after yesterday’s game, as shared in the post-game report, he highlighted Byfield’s physicality last night, which was evident to the eye as well. Byfield laid a massive hit in the neutral zone on Nashville defenseman Alexandre Carrier and was a hound around the puck, winning puck battles along the boards and playing with a noticeably physical edge.

“He was using the body a lot, I think he’s been he’s been playing really well since he got called up. We’re going to need him to continue to play like that.”

Whether it be the poise, the physicality, the puck hunting, something else or all of the above, signs are good for Byfield. As Kopitar concluded with, the Kings need him to continue that same level moving forward.

Lastly, Insiders, a quote from Todd McLellan this morning in summary of last night’s game. The second half was particularly interesting, I felt. Included in full –

The start is the most obvious one, we had two goaltenders before we even had a third line on the ice. That’s not a good thing and it’s not just a reflection on the goaltender, it’s a reflection of our group. Obviously that’s not how we need to start or how we want to start so that needs to be changed. I think the fact that we stuck with what we needed to stick with for a long period of time and worked our way back into the game was important for our group, but some of the coaching staff mentioned this morning that when you’re in that situation, 3-2, you fight back like that, real good playoff teams are able to lock it down. Yeah, you may get scored on once but you don’t get scored on three times, so that’s the concerning part. Right now, I think we’re back to where we feel like we have to score our way to win and that’s not the case. We need to play to win, not score to win and we’ll have to adjust that against a red-hot team tonight.