1/21 Preview – “Likely Same Lineup + Right Back At It, Men In The Mirror, Six-Game Forecast 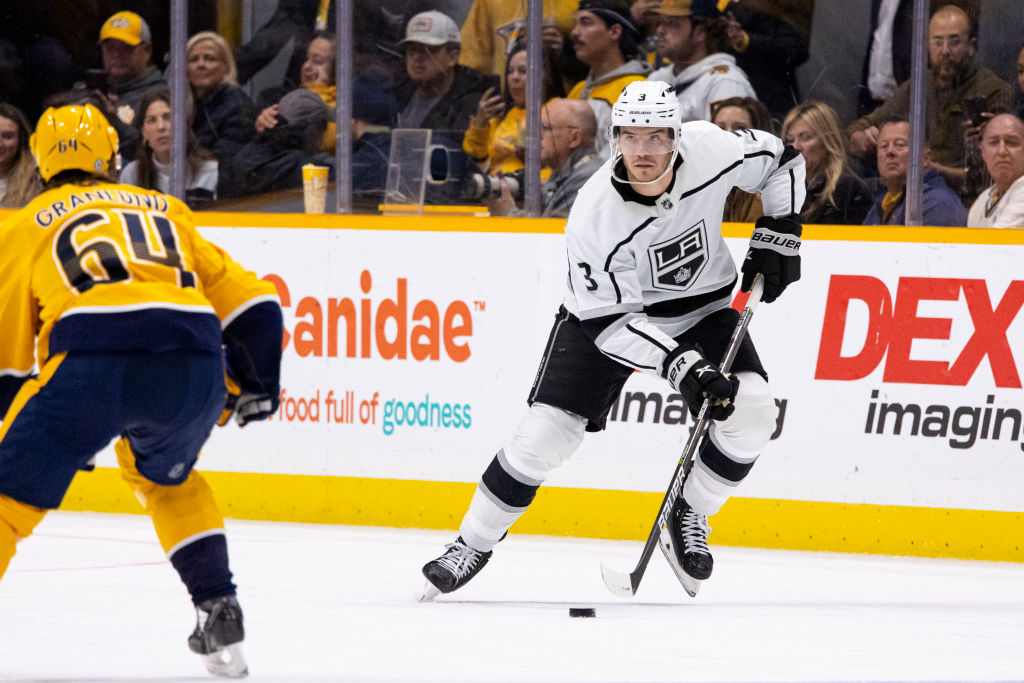 TONIGHT’S MATCHUP: The Kings are back on the road, opening up a six-game trip this evening in Tennessee against the Predators.

HEAD-TO-HEAD: Defenseman Matt Roy led the Kings the last time these teams met, as he scored twice in the comeback Kings victory in October. Forward Gabe Vilardi (1-1-2) also had two points in that game, while forward Quinton Byfield has four points (2-2-4) from two career games against the Predators.

KINGS VITALS: After a quick practice yesterday back in California, the Kings took an optional, yet well-attended morning skate today from Bridgestone Arena in Nashville.

Goaltender Pheonix Copley was the first netminder off this morning for the Kings, indicating that he will get the start this evening to kick off the trip. Copley has faced the Predators twice in his NHL career, posting a 0-1-0 record from the two appearances. Copley has 27 saves on 35 shots from the two games, one of which came in relief.

Kings Head Coach Todd McLellan indicated that the Kings will “likely” have the same lineup this evening against Nashville as they did against Dallas on Thursday, but he wouldn’t know for sure until the skate had concluded, which it had not during the morning availability. For reference, here’s how the team lined up last time out –

Should the Kings opt for the same grouping, that would mean that Gabe Vilardi (day-to-day) would not play, along with forward Alex Turcotte and defenseman Tobias Bjornfot. Vilardi practiced yesterday and is here in Nashville, no update as of this writing regarding his status for this evening or beyond. Samuel Fagemo was the lineup replacement on Thursday versus Dallas and would remain in if in fact the Kings made no changes.

PREDATORS VITALS: Nashville begins a four-game homestand this evening against the Kings and has 10 of 12 games overall here on home ice.

No word yet out of Nashville regarding a starting goaltender, but for now, we’ll assume that regular starter Jusse Saros will get the call this evening. Saros brings with him a record of 3-1-1 throughout his NHL career against the Kings, with a .919 save percentage and a 2.91 goals-against average.

Per Emma Lingan of Nashville’s team site, here’s how the Predators aligned last time out against St. Louis –

Defenseman Roman Josi is a point-per-game player against the Kings over the last six seasons with 12 points (2-10-12) from 12 games played. Nashville hasn’t lost to the Kings in regulation in this building since 2016, though the Kings won 4-3 in the shootout here back in October.

Notes –
Right Back On The Horse
Something to be said for getting right back at it after a tough one.

The Kings were not happy with their own performance against the Dallas Stars on Thursday. Coming off a four-day break, they were not on their game right from the start, though it was more a matter of the connectivity and sharpness, as opposed to energy. The last thing the Kings wanted was another break at this point and thankfully for their sake, they won’t get one. It’s right back into the thick of things with three games in four nights, beginning tonight in Nashville.

“It’s probably the best thing to happen, to go right back at it again, obviously we have the three in four nights,” captain Anze Kopitar said. “Personally, I like to get right back out there and correct it in a game, not in practices.”

The four-day break was the first of its kind this season for a Kings team that had the league’s most compact schedule over the first three months of play. As Todd McLellan put it, it wasn’t a century off and every team in the league has those situations and has to be ready to go in them. The Kings were there, physically, but not as much mentally, at least in the game’s opening stages, which saw them go three goals down in the opening period. Not the way this team has found success in the past, nor how they’ll have to play to find it tonight.

That’s in the rear-view mirror now and the group now feels as if its back on track and ready to go this evening against the Predators.

“It’s tough playing after a few days off like that, it’s no excuse for the loss, but we’ve flushed the legs out a bit, got our rhythm back and tonight we can prove ourselves,” defenseman Matt Roy added. “It’s a big road trip for us here and we have to get off to a good start.”

Time will tell how it plays out on the ice, but a good opportunity to right the ship here in Nashville.

Men In The Mirror
“I think we both have pretty similar structures and systems, it kind of feels like we’re playing ourselves sometimes. We’re both tight checking, physical and it makes for a good matchup.”

That was Roy’s take this morning when asked about the traditionally hard-fought battles between the Kings and Predators. Games especially in Nashville feel tight, with the matchups over the last two seasons both decided by a single goal. When the Kings are on their game against any opponent, it’s usually how games are played. A tie game in the third period without a ton of room on the ice is pretty normal for this group and Nashville has some of the same identities in their game.

If both teams are executing as intended, it should lead to a competitive game.

“Yeah, there are some structure things that come into play that are quite similar,” Todd McLellan said this morning. “I think he’s talking a lot about what happens in the neutral zone, which leads to breakouts and everything else, so it’s a team that mirrors us in some ways, yet is different in many ways too.”

The quotes this morning take me back to last season after the Kings got smacked by Boston at home in February. Trent Yawney was the acting head coach at the time and said something along the lines of “now we know what it feels like to play against ourselves.”

Outcome aside, the Kings have now felt that a couple of times since, most recently against a team like New Jersey last week. They know how difficult those types of games are, with the expectation that tonight will fall into that category as well.

“We know they’re hard to play against, they’re going to be heavy, it’s going to be a big boy game tonight,” defenseman Sean Durzi added. “It’s exciting, it’s fun hockey, you love those games rather than the high scoring ones and we’re looking forward to it. A good challenge ahead of us, they’re a great team and we’ve got to put our best foot forward tonight.”

Trippin’ It
Lastly, Insiders – A six-game trip begins tonight in Nashville and it’s the trip last season where we saw things really start to gel for this group. Six games on the East Coast, albeit against different opponents, heading into the All-Star break. Last year the Kings went 4-0-2 on this trip, with some key victories away from home. Is the team looking to replicate that success? Obviously……but you can only win the game in front of you.

“I think we have to look at it as Nashville tonight, we can’t compare last year to this year and say it’s going to happen again, we have to go make it happen,” Todd McLellan said this morning. “Every game has its own personality, identity, if you will, and we’re starting tonight, that’s all we have to worry about. Play it and then move on and at the end of the trip, we’ll look back and then we can compare, was this the same as last year or not, but one at a time.”

Polling the room on the situation, the word “focus” came up multiple times. Every team wants to go into a break on a positive note and day-to-day focus will be key to ensuring that the Kings are able to do that.

Hard to pick up more than the two points in front of you, but something that is worth following as the trip progresses. Doesn’t need to be 10 of 12 points, but for the Kings to get things started with 2 of 2 points would be the right way to get it going.