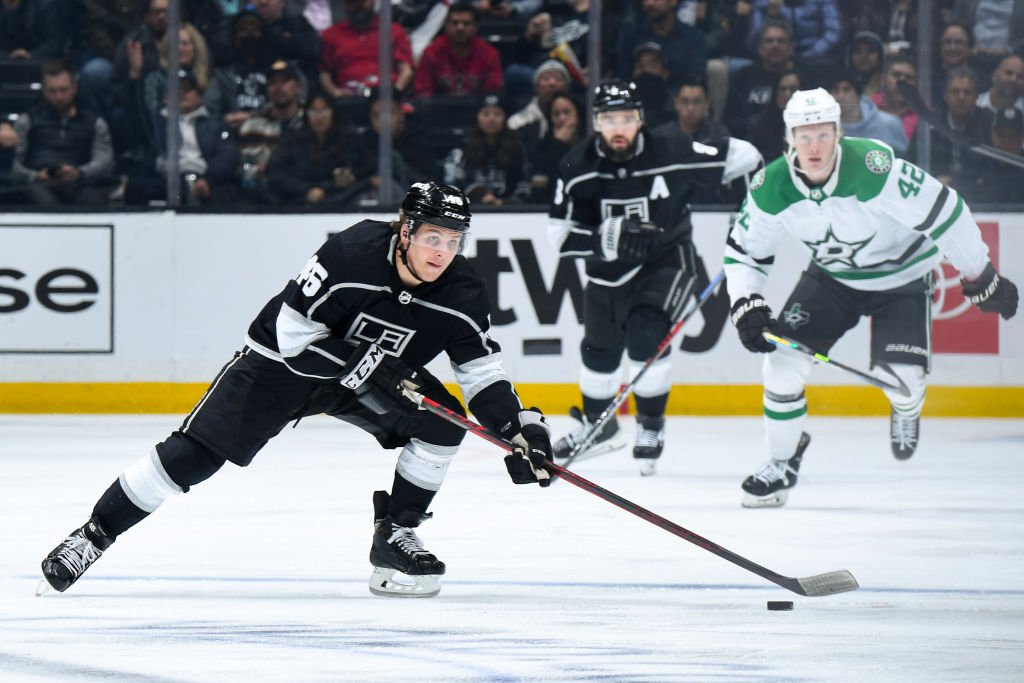 The LA Kings concluded a four-game homestand with a 4-0 defeat against the Dallas Stars on Thursday evening at Crypto.com Arena.

The Stars scored three times in the opening period to open up a 3-0 advantage through 20 minutes.

First, just under seven minutes into the game, forward Tyler Seguin snuck his shot past Kings netminder Pheonix Copley from the high slot, his 13th goal of the season. Seguin doubled his tally on the evening just over 10 minutes later, as he stepped into a wrist shot from the left-hand circle, firing underneath the crossbar and in for a 2-0 advantage. Defenseman Esa Lindell made it 3-0 with a bar-down shot of his own, as he took a feed off the rush from forward Wyatt Johnston and fired in for his sixth goal of the season.

Dallas opened the scoring in the middle stanza as well, the lone goal of the second period to take a 4-0 advantage. Forward Jason Robertson shook free behind the net, and though his first crack at the wraparound was saved by Copley, he buried his own rebound for his 31st goal of the season. Following Robertson’s goal, the Kings made a goaltending change, with Jonathan Quick entering in place of Copley.

Todd McLellan
On his takeaways from tonight’s defeat
I think this whole four days off, we didn’t take a century off, we took four days and every team has a four-day break here and there. We didn’t perform well in the first period. I thought, as the game wore on, we found some legs a little bit, we started to put two or three passes together. We created more momentum and more chances in the offensive zone, but we also have to think about their mentality. They played back-to-back, they had a three-goal lead in San Jose last night, there’s no way that team down the hallway with the leaders, at least I know one of them in there for sure and the coach real well, they weren’t giving up a three-goal lead in back-to-back games. We self inflicted our own misery early in the game and tried to find our game as the game wore on. We kept stressing find your game, find your individual game, find your legs, find your hands, find your head the whole night. As they drive home tonight, they have to self evaluate “how am I feeling, what did I get out of that game” because we’re obviously going on the road and we’re going to need to perform at a higher level than we did tonight.

On if he felt that most areas of the game were just a “little bit off” all around
I think that’s an obvious yes to the answer. I think you could watch that game, the disconnected passing, how many times did we ice it? We had our fourth line on the ice, we’re looking to make a simple pass, we don’t get a touch on it, they score on the faceoff. Those things have to be executed. We can whine about the ice, yeah it’s not good, we can whine about the passer or the receiver, but it happened too many times tonight. Wasn’t obviously good enough.

On getting right back into games this weekend, as opposed to another long layoff
Some of you are going to be on our flight tomorrow, you know how fast that day’s going to come and what time we’re leaving at, we don’t have the luxury again of practicing. We just had practice for two good days, so it’s time to get playing again. I think we’ve got to get our engine running again and understand moments and situations better than we did tonight.

On the team needing to remember how hard certain areas of the game are
If I look at the first 7 to 8 minutes of the game, which were really important, right up to the first goal, I felt like we had some jump, we had some energy, guys wanted to go, but we weren’t making good decisions. We’d enter into the zone, they’d have five guys in the middle of the rink and we slung a puck into there instead of going to the goalie’s pads and playing in the offensive zone. We talked about it prior to but you have to feel it, you have to live it a little bit again and understand it. It’s frustrating, but our group is a do and feel group as much as they are a visual and a hearing group. They did and they felt and it didn’t work.

On the decision to switch to Jonathan Quick early in the second period
Pheonix obviously has played well for us lately and it wasn’t his best night, maybe his poorest that he’s had with us. We thought about it after the first period, but he hadn’t played in eight days, so we wanted to get him more more time, but it was a real good time for Quickie to go in and I thought Quickie played well. He didn’t get a lot of action, but he was in the game, he made some good puck handling touches and some stops right off the bat on the penalty kill. If there’s a positive, he got some good minutes in and got to feel good about himself.

Notes –
– The Kings were shutout tonight for the first time since December 13 in Buffalo, the third time they’ve been shutout this season.
– Forwards Viktor Arvidsson and Anze Kopitar led the Kings with five shots on goal tonight.
– Defenseman Drew Doughty led the Kings with 22:18 in time on ice, while Adrian Kempe led the forwards at 18:44.
– The Kings went 4-of-4 on the penalty kill this evening, improving to 88.9% over their last five games.

The Kings are scheduled to practice tomorrow morning at 10 AM at Toyota Sports Performance Center, before departing for Nashville later in the day.