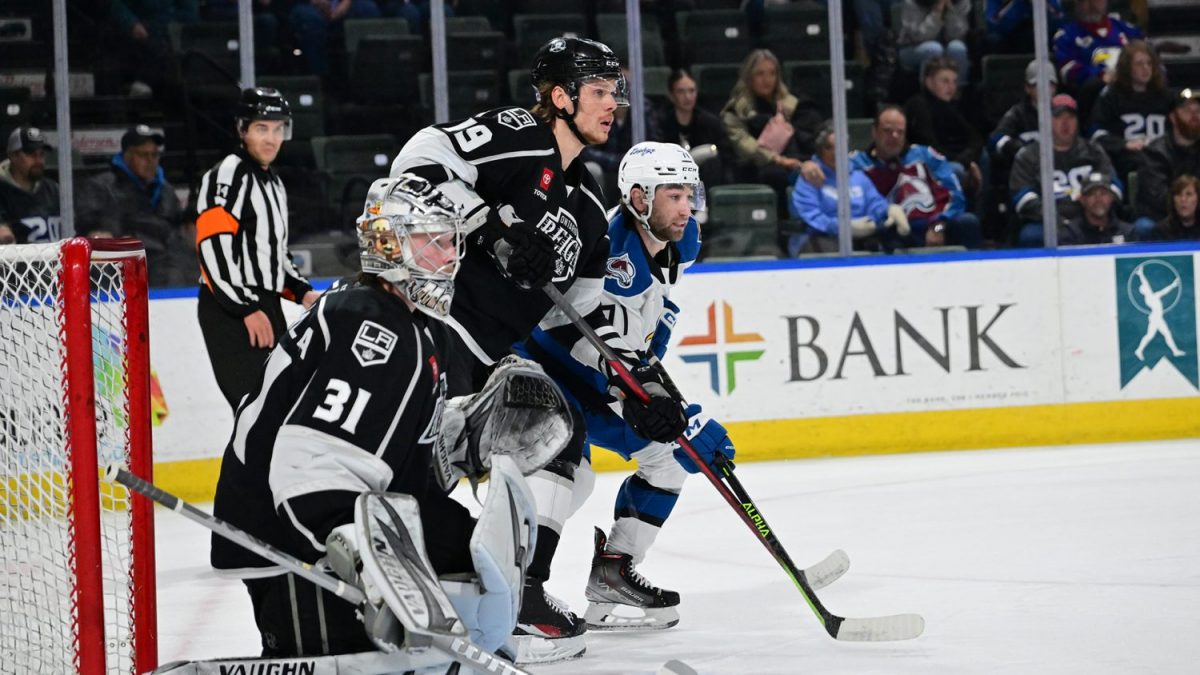 Reign defenseman Kim Nousiainen scored his first North American pro goal in the contest, while Lias Andersson netted his team-leading 14th goal of the season late in a losing effort.

More from head coach Marco Sturm and Nousiainen below.

For the second straight day, the Eagles scored early to take a lead in the first. Callahan Burke dangled to the goal and found the back of the net with a wrist shot at 6:03 before Charles Hudon added to the lead with a power play strike at 14:42. Colorado went back to the dressing room with a 2-0 lead after 20 minutes.

Ontario was unable to get any closer in the second, despite multiple opportunities at the Eagles net. Colorado broke through for another pair of goals in the final minutes of the middle period to put distance between themselves and the Reign.

Sampo Ranta snuck a puck by goaltender Matt Villalta at 16:56, and then with Ontario down a man after an elbowing penalty to forward Andre Lee, Hudon scored his second of the night on a wrist shot that went off the post and in to make it a 4-0 game.

The Reign started the third with lots of pressure in the Colorado end and it eventually resulted in their first tally of the evening, coming off the stick of Nousiainen at 2:02 from Martin Chromiak and Aidan Dudas.

With the helpers, Chromiak and Dudas both extended their season-high point streaks to six games apiece.

Foudy added his second goal of the game for the Eagles at 12:00 of the third, re-establishing a four-goal lead for the home club.

But Ontario was unable to get any closer until the final minute of the game when Andersson drove to the net and wristed a shot to the top right corner of the Colorado goal. The strike came with assists from Jacob Moverare and TJ Tynan.

Eagles’ goaltender Justus Annunen earned the win by stopping 20 shots for his team, while Colorado had a 2-for-4 effort on the power play and held the Reign to an 0-for-3 night on the man-advantage. Villalta suffered the defeat in the Ontario crease, turning aside 20 shots.

Marco Sturm
On the difference between Tuesday’s win and Wednesday’s loss
I think right from the start they were just the better team. They had more energy, they had more life, we looked mentally tired too and that’s why we played a little bit slower than yesterday. They had a better goalie, they had better 5-on-5 play and they had better special teams so we deserved to lose today unfortunately because I thought there was more to it and we could have stolen some more points here even today, but overall, we got two points out of the series against a really good hockey team and now we just go home and regroup and go back at it.

On Nousiainen scoring his first goal
Kimmy worked really hard and he’s in a tough position, he doesn’t play every night. But at least he tries, he tries every day in practice, he tries in games, so happy for him that he scored.

Ontario is back in action at home Saturday night to host the Coachella Valley Firebirds at 6 p.m. inside Toyota Arena during the team’s annual First Responders Night promotion.