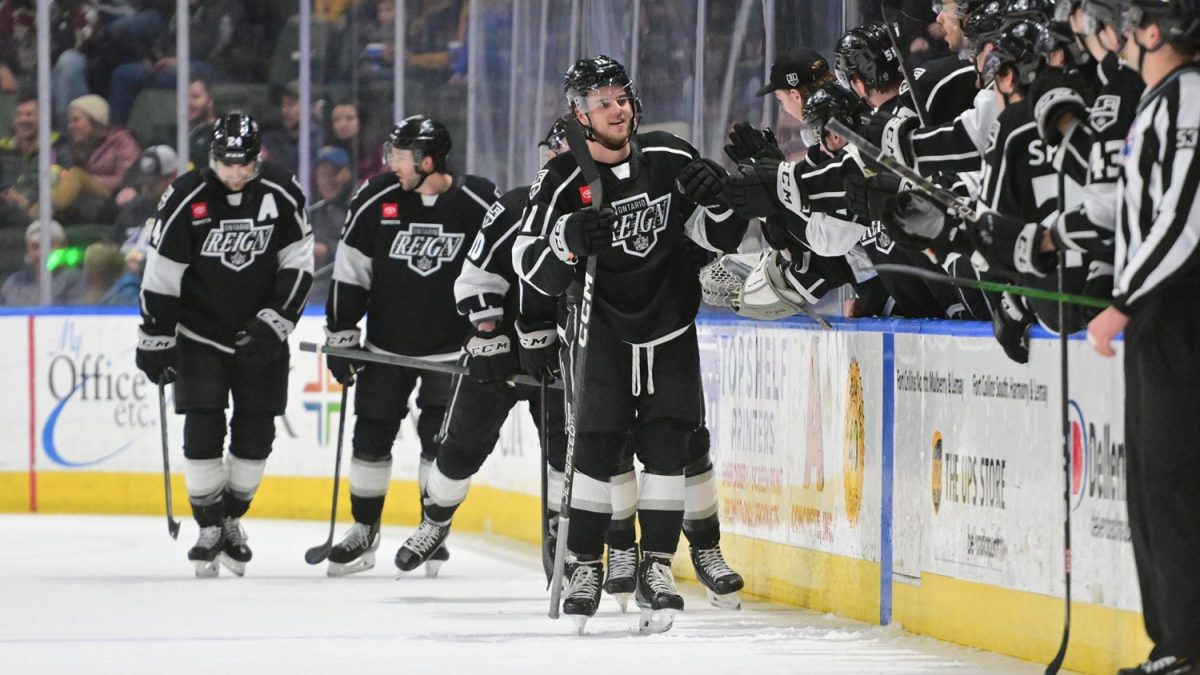 The Ontario Reign (20-13-0-1) scored six unanswered goals to dig themselves out of a two-goal hole in the second period and streak past the Colorado Eagles (21-12-3-0) to win by a final score of 7-3 on Tuesday night at the Budweiser Events Center.

Samuel Fagemo and TJ Tynan led the way offensively with three points apiece in Ontario’s fifth straight victory, while Martin Chromiak scored his fourth goal during the winning streak and Alex Turcotte netted a goal and an assist in his return to action after missing five games with an injury.

More from head coach Marco Sturm and Fagemo below.

Colorado got out in front early with a goal during a delayed penalty by Josh Jacobs just 2:42 into the first period.

Ontario earned some momentum back and put pressure on the Eagles that saw Colorado take three consecutive minor penalties during the middle part of the frame. But the Reign were unable to get on the board during any of their looks and took their one-goal deficit into the first intermission.

The Eagles extended their lead early in the second at 1:32 when Jean-Luc Foudy came in on a 3-on-2 rush and used a head fake before slipping a wrist shot past Cal Petersen.

Then Tynan got Ontario on the board against his former team less than three minutes later from the front of the net by redirecting a pass from Tyler Madden up high to cut the Colorado lead to 2-1.

At 8:24 of the second, the Eagles put the pressure on and went back up by two on a goal by Alex Galchenyuk off a rebound in front. But that was the last time Colorado would put a puck past Petersen, who finished with 25 saves to earn his eighth AHL win of the season.

Two minutes after Galchenyuk’s goal, the Eagles took two penalties within moments of each other when Oskar Olausson was whistled for tripping and Callahan Burke covered the puck with his hand on the ensuing faceoff before being escorted to the penalty box with a delay of game minor.

While Ontario had an extended 5-on-3 advantage, Fagemo netted his first of the game with a one-time blast off a feed from Jordan Spence to bring the Reign within a goal at 3-2. Tynan also picked up a second assist on the play for his second point of the evening.

Later in the period, Austin Wagner picked up the puck near the Colorado bench while the Eagles were changing and out-raced everyone on the ice to tie the game at 3-3 with his seventh goal of the year.

11 seconds after Wagner’s strike, right after the ensuing faceoff, Fagemo slapped a puck from the wall at the net and beat Jonas Johansson for the second time in just over a five-minute span to put Ontario in front for the first time at 4-3.

The Reign kept their feet on the pedal in the third, adding three more goals to put distance between them and Colorado. First, Chromiak scored his fourth goal in his last five games at 7:39 off a drop pass by Turcotte in the slot to extend the lead to 5-3.

Next, while killing a high-sticking penalty to Wagner, Taylor Ward and Turcotte found themselves on a 2-on-1 rush and connected for a shorthanded goal at 12:35.

The final tally of the night came 1:50 after Turcotte’s goal when Lias Andersson scored his team-leading 13th strike of the season from Tynan and Ward off another odd-man rush into the Colorado end.

Fagemo’s 5-on-3 tally was the lone special teams conversion of the night as Ontario finished 1-for-8 and Colorado ended at 0-for-3. Johansson turned aside 21 Reign attempts in a losing effort for the Eagles.

The Reign finish their series in Colorado on Wednesday evening against the Eagles at the Budweiser Events Center at 6:05 pm PT. Ontario will then return home to host the Coachella Valley Firebirds on Saturday at 6 p.m. inside Toyota Arena.