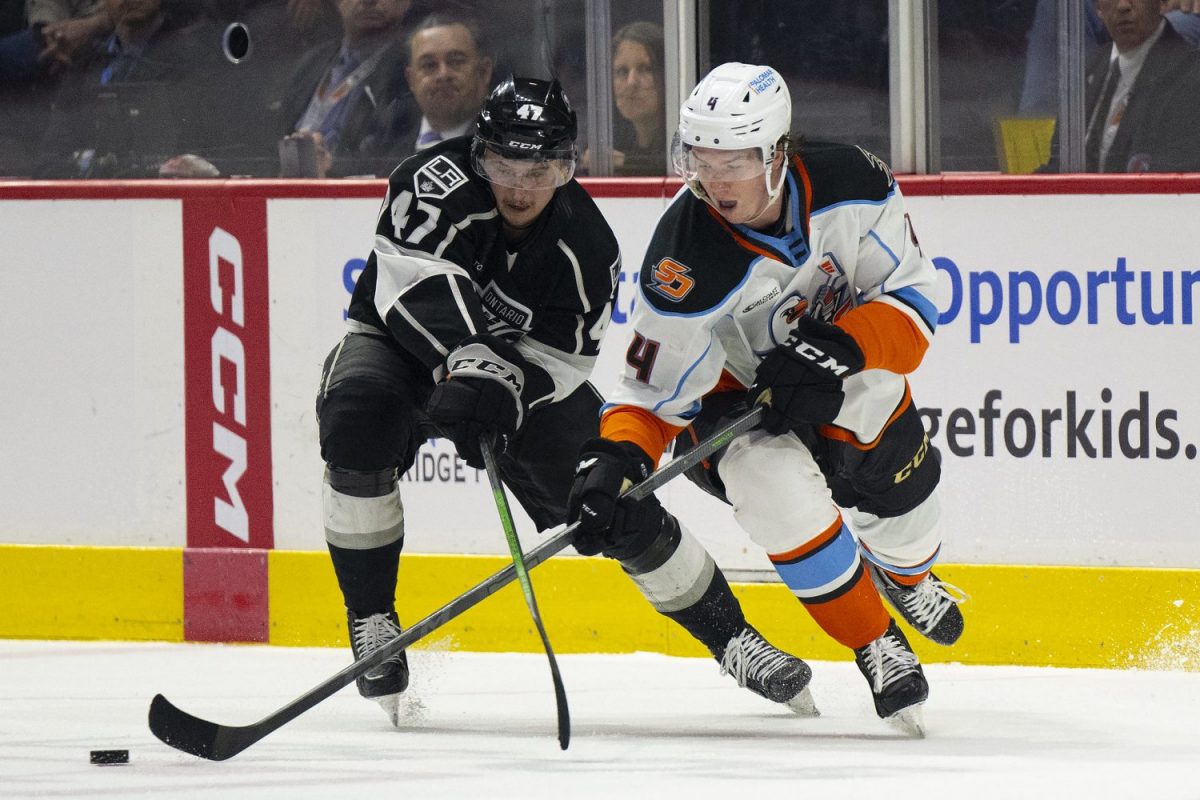 TONIGHT’S MATCHUP: The Ontario Reign defeated the San Diego Gulls for the third time in four meetings this season on Friday night and are looking to sweep the weekend home-and-home set on Saturday evening at Toyota Arena. The Reign have already claimed both games of a series against the Gulls this season, doing so early in the season on Oct. 21-22. Ontario’s lone loss to their division rivals this season has come by a 4-1 score inside Toyota Arena on Nov. 13.

WHAT TO WATCH FOR: While Ontario is in the middle of the pack with a fifth-place standing in the Pacific Division, the Gulls, who hit the halfway mark of their year after Friday’s game, sit at the bottom in 10th place with a league-low 11 wins. The Reign have scored an average of three goals per game through their first 32 contests, while offense has been an issue for San Diego who ranks fourth from the bottom of the AHL scoring rankings (2.69). Scoring three power play goals on Wednesday moved Ontario up in the man-advantage rankings for the season, now at 20.6%, while the team’s penalty kill remains strong at 83.1%, which is 7th-best in the league. The Gulls’ kill is just behind at 82.0% (13th).

LAST TIME OUT: Tyrell Goulbourne scored in his first appearance for the Ontario Reign Friday night, a 3-1 win over the San Diego Gulls at Pechanga Arena in the first contest of a weekend home-and-home series. Martin Chromiak and Jacob Moverare also found the back of the net in the victory, while Aidan Dudas earned an assist for the third straight game and Matt Villalta stopped 17 of 18 shots to earn the win for Ontario.

CALL HIM GOALbourne: Tyrell Goulbourne didn’t disappoint in his first career game with the Reign on Friday, going toe to toe in a fight with San Diego’s Travis Howe just 2:44 into the contest before scoring the first goal of the evening to put Ontario in the lead at 8:18 of the second period. Goulbourne had went the entirety of the 2021-22 season without a tally when he appeared in 18 games split between the Belleville Senators and Stockton Heat. His most recent strike came in March of 2021 while playing with the Henderson Silver Knights. Friday’s contest was his 313th career AHL game, during a span that has seen him suit up for six different franchises.

SCOUTING THE GULLS: San Diego has been led on the offensive end by Rocco Grimaldi, who is their only skater averaging a point per game with 36 points in 35 contests on 14 goals and 22 assists. Center Benoit-Olivier Groulx has also pitched in with 22 points on eight goals and 14 helpers while suiting up for all in 36 of the team’s games. Defender Nikolas Brouillard has remained heavily involved on the offensive end and is second on the club with 28 points (6 goals, 22 assists) while also appearing in all the Gulls’ contests. Glenn Gawdin, who has earned himself playing time in Anaheim this year as well, ranks second on the team with nine goals and has collected 14 points in 21 outings. Lukas Dostal has been the team’s rock in net, posting a 2.66 goals-against average and a 0.924 save percentage in 25 appearances.

CHROMIAK HEATING UP: Martin Chromiak followed up his first AHL goal Sunday afternoon with an assist on a strike by defenseman Tobie Bisson Wednesday in Ontario’s win in Henderson. He then made it points in three straight Friday, scoring the game-winning tally in the third period against San Diego. Chromiak has now registered six points in 16 contests for the Reign during his rookie professional season. The Ilava, Slovakia native was selected by the LA Kings in the fifth round of the 2020 NHL Draft and starred for the Kingston Frontenacs in the Ontario Hockey League (OHL) during two junior seasons that saw him total 119 points in 88 games on 55 goals and 64 assists. Chromiak originally made his AHL debut at the conclusion of the 2021 season when he appeared in two contests with Ontario.

DUDAS DISHES: Aidan Dudas has helped teammates find the back of the net in three consecutive road games over the past week, adding four assists to his season total which now stands at seven through 32 games. The Parry Sound, Ont. native has posted helpers on both of his linemate Martin Chromiak’s goals, including his first career AHL tally on Sunday and the game-winning strike during the third period in San Diego on Friday. Sandwiched in between those contests Dudas had a pair of primary helpers in Ontario’s 6-3 win over Henderson on Wednesday, including a first period tally by defender Tobie Bisson and a late insurance marker from Austin Wagner at 16:28 of the third. Overall, Dudas has 13 points this season (6-7=13) while suiting up for all of Ontario’s contests.

TYNAN’S STAR SHINING BRIGHT: After it was announced that Reign captain TJ Tynan would represent the Pacific Division at the AHL’s All-Star Classic in Laval next month Wednesday morning, the team’s No. 1 center had himself a big night on the ice. Tynan recorded assists on three Ontario power play goals in the team’s win in Henderson, his second-highest single game scoring output during 2022-23. Overall, Tynan’s offensive output of 34 points (4-30=34) leads the team and his assist total is tied for second-most in the AHL this season. In addition, the Orland Park, Ill. native has totaled a league-leading 17 power play assists and 19 power play points, which is second to Tucson’s Michael Carcone who also selected to the All-Star roster and will be one of Tynan’s teammates at the event.