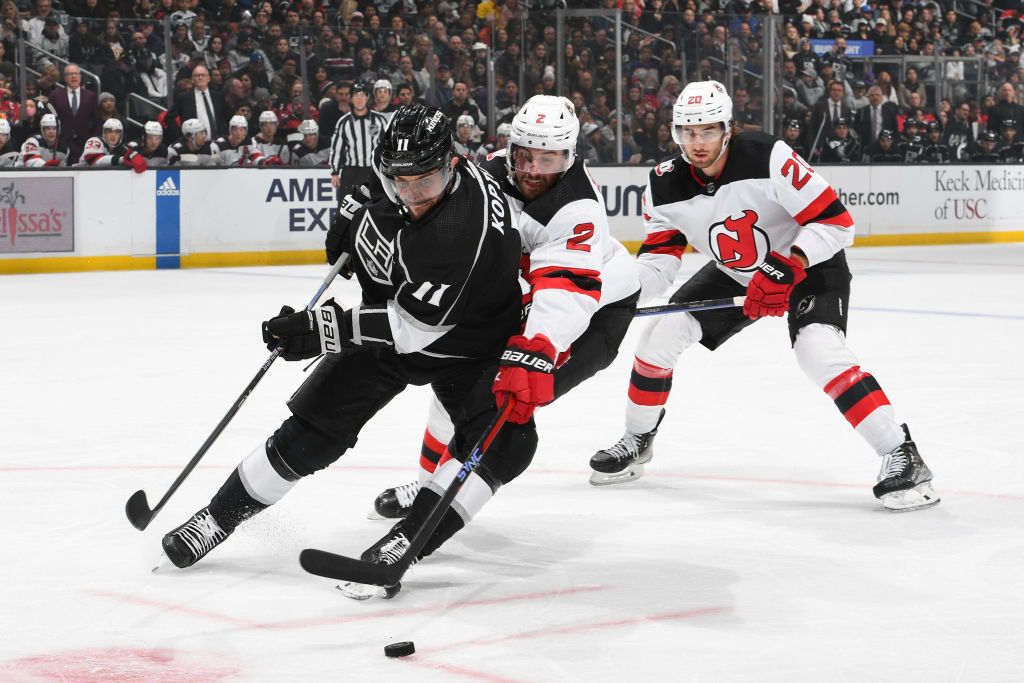 The LA Kings fell for the first time at home since December 3, as they skated to a 5-2 defeat against the New Jersey Devils on Saturday evening at Crypto.com Arena.

Forwards Kevin Fiala and Anze Kopitar each scored on the power play for the Kings, while defenseman Drew Doughty tallied two assists. Goaltender Jonathan Quick made 23 saves in net in defeat.

The Kings got the scoring started with a power-play goal, as Fiala made it six goals from his last four games played. Forward Adrian Kempe, stationed inside the right-hand circle, threaded the needle through traffic to Fiala at the back post, where he redirected the pass home for his 16th goal of the season.

New Jersey answered back, however, with a power-play goal of its own to tie the score at one heading into the first intermission. Forward Jack Hughes fired on net from the left-hand circle, a shot that was stopped, but the rebound deflected off a New Jersey skate right to forward Tomas Tatar, who buried his tenth goal of the season.

On the other side of the break, the Devils took their first lead of the night, against the grain. Despite an offensive push from the Kings right off the faceoff, the puck went the other way a on a 2-on-1 rush, with forward Erik Haula keeping it himself and burying his shot on the blocker side for his third goal of the season.

LA answered right back with another power-play goal, however, to knot the score at two. Just over four minutes after Haula’s goal, the Kings drew even through Kopitar, who worked his way to the front of the net and redirected a Doughty shot from the point into the back of the net for his 12th goal of the season, extending his point streak to six games in the process.

The Devils scored twice more, however, to take a 4-2 lead into the second intermission. First, defenseman Nikita Okhotiuk scored his first goal of the season, as he put the visitors ahead just 52 seconds after Kopitar’s goal. Defenseman Ryan Graves made it 4-2 just past the halfway mark of the second period, as his shot from the point skipped off the ice and bounced over Quick’s stick and in for his fourth goal of the season.

Forward Jesper Bratt buried into the empty net in the latter stages to secure the 5-2 victory for New Jersey.

On the difficulty of getting scored on right after tying the game
A little bit, I think sometimes it’s felt like all season we’ve been pretty good at responding, even when we give up a goal. We scored two on the power play tonight, so that was good for the confidence and obviously it’s a little frustrating when they score right after. It was a lucky bounce and we’ve got to learn from that and keep going.

On what he feels is clicking right now with his power-play unit
We’re moving the puck well, I think, the breakout’s been good, everybody’s playing, it doesn’t matter where they end up. I think we’re moving and shooting a lot more and I think when we prescout teams, we take the information and do it in the games. Tonight, I think we did a good job, we could have had another one too. It’s something we can build on.

Todd McLellan
On his overall assessment of tonight’s game
I didn’t think we got enough from everybody in the lineup tonight. Some of it, the fourth line didn’t get to play a lot, just the way the game rolled out, but I thought Phil Danault’s line didn’t have their best night. Arvy was coming off being sick, they didn’t have a lot of pop in their legs, usually they’re controlling play and you end up a little bit short in those situations. For Phil’s line, how many times have they played well and carried everybody else, so on nights when you when you don’t have a couple of guys, others have to pick it up. We had three breakaways, JAD had a breakaway, Kevin had a breakaway and got pulled down and we had a penalty shot, one of them’s got to go in. So, the offensive part of the game has to be there as well as the defensive part.

On the play of Jonathan Quick tonight and if there is concern
Well, I think we have to look at goals that were scored, we took a bad penalty on the first one, then a bad pinch, no cover 2-on-1 on the second one. Third one, I’m sure he’d like to have back, the fourth one we kicked into our own net, so I don’t know how much of it you can put on the goaltender. At the other end of the rink, our power play was effective, some of our best chances we didn’t make their goaltender work. We were a little too cute, maybe with a shot, high, wide, especially in the first and second periods.

On if there were sustained stretches tonight he liked
I liked the first period, I thought the first period was really good. I liked basically all of our power plays, I liked most of our penalty kill. I thought the third period, they showed why they’re the team they are right now, they were able to get the lead and clamp it down. We had a tough time coming through the neutral zone, but I think that’s what it feels like when we have the lead. Good teams do that and they did it.

On if he felt the third goal against was a deflator, coming shortly after Kopitar’s goal
Yeah, we had a spell there where we were giving stuff up real quick and we cleaned that up significantly, in my opinion. 82 games, there’s going to be nights where it comes back to haunt you and tonight was one of them.

On Quick managing a different workload than perhaps he’s used to
Careers begin a certain way and then they evolve as you go. Jonathan is a really important part of our team, he’s a hell of a goaltender, he’s a competitive individual that means a lot to our group. He makes us better in practice, he makes us better in a game and when Copper’s playing the way he is, he’s going to get the majority of the starts, he’s hot right now. We’re going to continue to run him and Quickie has to be able to adjust to that. He will, he can and he’ll be just fine.

On the organization being beyond moral victories from a game like this
We’re past the moral victories. If that still exists in and around here, we’ve done something sorely wrong and that includes individuals. I don’t care if you’re young and just drafted or if you’re an old player that’s well established, moral victories don’t do us any good anymore. That was two or three years ago. We’re now here to play to win and when we don’t win, we’re not happy.

Notes –
– Kevin Fiala increased his team-leading point total to 47 points (16-31-47) with his 16th goal of the season.
– Anze Kopitar scored his 12th goal of the campaign, to extend his point streak to a season-long six games. The goal was also his 200th career home goal. Only three other skaters in franchise history have scored 200 goals at home: Luc Robitaille (322), Marcel Dionne (288) and Dave Taylor (233).
– Drew Doughty (0-2-2) recorded his 111th career multi-point game, tying Rob Blake for most multi-point outings by a defenseman in franchise history. In doing so, Doughty extended his point streak into a third game (1-4-5).
– Gabriel Vilardi collected an assist to extend his point streak to four games (1-5-6).
– Adrian Kempe eclipsed the 30-point mark for the fourth time in his career with his assist on Fiala’s first period goal.

The Kings are not scheduled to practice tomorrow or Monday. The team is scheduled to return to the ice on Tuesday at 11 AM at Toyota Sports Performance Center.