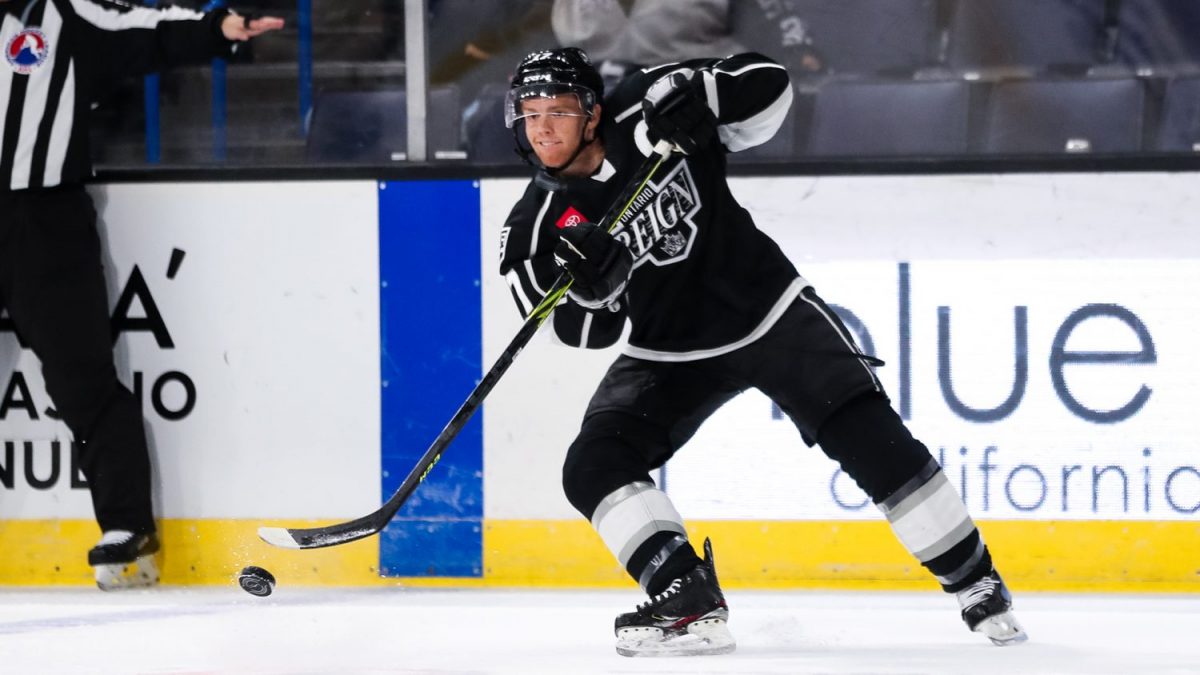 Ask any captain about their leadership style and the answer you get will almost always be focused on the interactions he has with his teammates. It’s no different with Ontario Reign captain TJ Tynan, who is wearing the “C” for the first time in his professional career this season.

“It’s not just me,” Tynan said when asked how he approaches his role. “We have so many guys that have been around and a lot of guys that can be captains. It’s 100% a leadership group. It’s not just one guy; it’s not just three guys. It’s everyone.”

But no one else in the Reign locker room brings the focus and competitiveness that Tynan has. His expectation is to be the best and that sets an example for the rest of the team.

The captain is having another standout season, leading Ontario with 34 points in 31 games and as usual, most of his scoring is made up of assists. His 30 helpers are tied for second-most in the AHL and more than half of them have come on the power play (16).

So, it didn’t come as a shock to see him on the list of skaters selected to represent the Pacific Division at the 2023 AHL All-Star Classic in Laval next month on Feb. 5-6. It’s the fourth time in Tynan’s career that he’s participated in the event, which included the most recent occurrence when it was held in Ontario in 2020, prior to COVID-19 postponements during each of the last two seasons.

Reign head coach Marco Sturm gets an up-close look at what Tynan brings on and off the ice each day and said it was a well-deserved honor for the Orland Park, Illinois native.

“No surprise for me, he’s been our best player this season,” Sturm said. “He’s a very competitive guy and he brings it every night. There’s not one day yet I’ve seen him slowing it down. He deserves to be there and I hope he does well.”

When asked what it means to him that he’s being recognized, again Tynan’s first thought is of his teammates.

“It’s a great honor,” Tynan said. “It’s just a testament to my teammates and the guys around me. I get to play with a lot of talented guys every day in games and in practice.”

After the announcement of the All-Star rosters on Wednesday, Tynan went out and factored in on three power-play goals, earning assists on each, in a 6-3 win over AHL-Henderson.

Lias Andersson, Tynan’s linemate that night and for most of the season thus far was also on the scoresheet for all three of those goals, posting two tallies and an assist himself. Andersson is the latest forward in the LA Kings organization to benefit from Tynan’s pass-first mentality.

Last season when Tynan helped Ontario set a single-season AHL record for power play percentage, it was other forwards who had lofty goalscoring numbers, such as Martin Frk and Samuel Fagemo with 40 and 27 goals respectively. 15 of Frk’s tallies came on a power play unit with Tynan, while Jaret Anderson-Dolan found the net 12 times on the man-advantage and Fagemo added nine.

Even Andersson, who had a four-game conditioning stint with the Reign after an injury with the Kings, scored six times with three of them coming in Tynan’s power play group.

Now that he’s had a more consistent role next to the captain, Andersson has been a first-hand witness to that expectation of excellence.

“He’s an unbelievable player, an NHL player in my eyes,” Andersson said after Wednesday’s win. “He’s fantastic; an awesome captain and a really good teammate. I’m really happy for him that he’s going to the All-Star game.”

Andersson added that sometimes Tynan’s competitiveness rubs off on him, so much so that they’ve had to calm each other down during a game.

“He’s really intense,” Andersson said. “Sometimes we have to calm him down a little bit. Same with me too. But he’s so competitive and I love to play with him. “He runs this train.”

Sturm said he loves having a player with those kind of attributes on his roster.

“He’s a competitor and he wants to win,” the Ontario bench boss added. “Yeah, he screws up too once in a while, we have to settle him down, but that’s just the way he is. I’d rather see him be competitive and want to be out there and want to be the difference and that’s what good players do. That’s what I’ve seen all year long.”

The relationship between captain and coach is critical towards team success. While Tynan is a holdover from Ontario’s 2021-22 team and leadership group, Sturm is a new face who is in his first year as a head coach in pro hockey.

Even though Sturm is getting his first taste of minor professional hockey this year, Tynan said he doesn’t look at him as someone who needs to learn anything new. His 938 games on the ice in the NHL and four seasons as an assistant coach with the Kings have put him in a great spot for a transition to the other end of the Toyota Sports Performance Center hallway with the Reign.

“It’s been great to get to learn from him,” Tynan said. “I’m just trying to soak up as much as I can. He’s been around a hockey a long time, so I don’t think I’m going to be the one to show him anything new.”

The lines of communication have been open, with each party showing an openness and eagerness to be on the same page.

“Marco is an easy guy to talk with,” Tynan said. “If he needs to talk to me, he’ll pull me in and we’ll just have a chat. If we have a question or something we want to talk about as a leadership group, we just go ask.”

While the captain may not be on pace for the scoring total he finished with a year ago when he threatened tripe digits with 98 points and collected a second league Most Valuable Player trophy, Tynan’s goal is to have success in the postseason, a place he and Ontario fell short last May with a second-round exit at the hands of his former club.

His play in all situations will continue to be the key to the Reign’s success on the ice and with him as a leader, they’re confident more wins are in their future.

🌟 The Captain is headed to Laval! 🌟

TJ Tynan has been selected for the 2023 @theahl All-Star Classic!