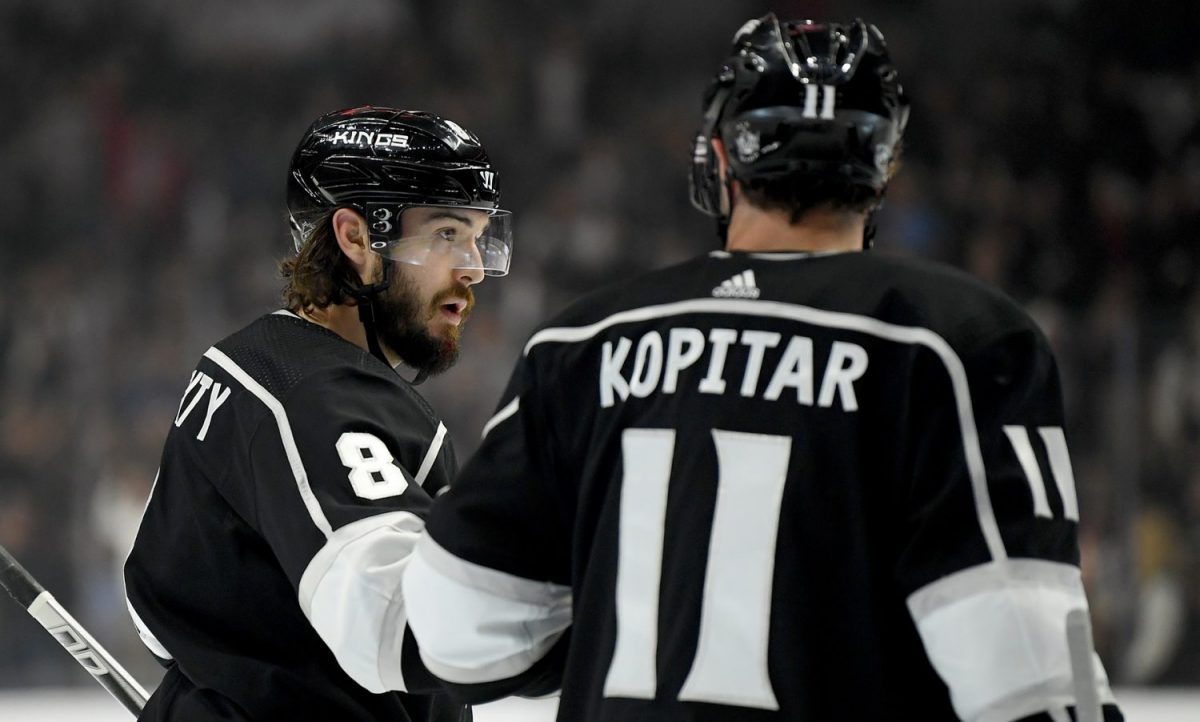 TONIGHT’S MATCHUP: The Kings return to action this evening as they host the Arizona Coyotes at Crypto.com Arena.

KINGS VITALS: Following the group not skating yesterday, everyone was back on the ice today for a full-team morning skate in El Segundo.

The first goaltender off the ice this morning was Jonathan Quick, making him tonight’s projected starter against Arizona. All-time versus the Coyotes, Quick is 22-20-5, with a .905 save percentage and a 2.49 goals-against average. Quick has six shutouts all-time against Arizona, his most against any NHL franchise.

Today’s line rushes are listed below, indicating the changes expected from Tuesday’s game versus Seattle –

Starting with the forwards, the top six remains the same from Tuesday’s game, but Samuel Fagemo is expected to check in up front, with a shuffle made to the bottom six. It looks as if forward Arthur Kaliyev will move up to a line with Gabe Vilardi and Blake Lizotte, while Fagemo slots alongside Jaret Anderson-Dolan, who moves to center, and Carl Grundstrom. Forward Tyler Madden, recalled later in the day, did not skate with the Kings.

On the backend, Tobias Bjornfot will likely make his NHL season debut alongside Matt Roy, a pairing that opened last season together before early injuries shook things up. Sean Durzi also moves back to the right side, alongside Alex Edler, with Sean Walker appearing to be the odd-man out alongside Brandt Clarke.

In net, Pheonix Copley was on the ice and is expected to backup tonight. As noted earlier today, goaltender Cal Petersen was assigned to AHL-Ontario and skated this morning with the Reign. More on those moves HERE.

On the injury front, Alex Iafallo skated in a regular jersey today and General Manager Rob Blake said it’s “really encouraging “ to see him getting close. Brendan Lemieux has begun skating on his own, bringing us up to speed on the full group.

COYOTES VITALS: Arizona has been off since Sunday, a defeat against Minnesota, and tonight’s game versus the Kings begins a four-game trip against Pacific Division opposition.

No report yet on Arizona’s starting goaltender for tonight, but we’ll assume for now that Karel Vejmelka will get the nod between the pipes, for the purposes of this writing. Vejmelka has faced the Kings twice in his short NHL career, posting a 1-1-0 record, with a .922 save percentage and a 2.94 goals-against average.

Per Arizona’s team account, here’s how the Coyotes lined up last time out –

Arizona’s projected lineup includes former Kings defenseman Troy Stecher, a deadline acquisition a season ago, who signed a one-year contract with the Coyotes in the offseason. Coyotes forward Matias Maccelli enters tonight’s action as the league leader in assists amongst rookies, ranking third in total points by a first-year player.

Notes –
A Team Meeting
Yesterday was a weird day. No doubt about that. As covered yesterday, the team opted not to hold an on-ice practice following the 9-8 overtime loss against Seattle. In addition to an off-ice workout, the team held internal meetings, with players, coaches and management gathered together to address certain facets of the game – both positive and negative – coming off of Tuesday’s defeat.

Rob Blake confirmed that he addressed the group yesterday in a setting with everybody together in one room. The reasoning was not specifically related to the decision to place Cal Petersen on waivers, but rather larger topics as a whole.

“I did, I just felt the need to do it, not specifically on Cal, but specifically on that we want to get better in a lot of areas,” he said this morning. “When you get to the 20, 25-game mark, it just kind of coincided with all of that yesterday.”

When asked to further detail those areas, Blake used the word that we’ve heard perhaps more than any other besides expectation and that’s consistency.

The Kings have lacked it across the board and that’s been perhaps the biggest area of frustration. When this team is at it’s best, it’s noticeable in a major way. They’re suffocating, in possession, creative and formidable. That’s what makes the times when they aren’t that much more difficult to watch, because this team as assembled can be quite good. Blake spoke on that earlier today.

Speaking with Todd McLellan and Anze Kopitar, both indicated that yesterday’s meeting was less about “X’s and O’s and more about team-wide discussion and state.

“It wasn’t a whole ton about X’s and O’s, just going back to playing the way that we need to play to win games, that’s the bottom line,” Kopitar added.

While the messaging coming from Blake contains similar wording to what we’ve heard from McLellan and the players this season, sometimes having a different voice help to deliver that message can be a welcomed thing.

“Well, [we’re] certainly saying the same thing, we’re on the same page, which is a real good thing,” McLellan said this morning. “It’s not often that Rob or any general manager that I’ve been around frequents the locker room in those types of situations and for as much as it can be deemed a negative signal to many, it could also be a positive one, because there are some things that the team is doing well. He recognizes, or we recognize, those but there are also things that need to get cleaned up, so it works both ways.”

At the end of it, the talking part is done and behind the group and the buy-in appeared to be unified today, looking ahead from this point on. Blake said that he “one-hundred percent” believes that he has the buy in that is necessary to play the way they want to play moving forward. A good opportunity to showcase progress tonight against Arizona!

A Commitment To Change
Not everything that has transpired over the last 48 hours has been a direct result of JUST the game against Seattle. Giving up nine goals in a game certainly might expedite a process, but no one – players, coaches or management – has felt that things like a personnel shakeup, a cancelled practice or a team meeting were necessitated by just one game.

Speaking with team leaders this morning, the focus was on getting back to a brand of hockey the Kings are known for and have found success with. The hope is that starts tonight.

“It’s getting back to the checking mindset of things,” Anze Kopitar said this morning. “Yes, we would like to score goals, but we can’t just be trading chances back and forth. It’s going back, looking back to last year, how we checked and everybody has a big part in doing that. We’ve got to start working and playing more towards that.”

Drew Doughty put the onus on the players, saying that the Kings haven’t helped out the goaltending at all this season. He called the last 48 hours a wakeup call for the team to step up and play better, knowing that the team the Kings have this season – one that Doughty believes is one of the most offensively talented groups he’s ever been apart of – is better than what the results have been.

When asked where the first step is towards improving, he was simple – “playing better defensive hockey.” He elaborated, using many of the same phrases as Kopitar.

“We can’t be giving up chances, trading chances with other teams, that’s not how we’re going to win games, you saw it when we lost the game [versus Seattle],” he said. “Playing better, defensive hockey, more physical and still scoring goals, we want to still score goals, but there’s a difference between scoring goals by cheating and scoring goals by playing the right way and we’re not doing it the right way.”

The same messaging came from McLellan in his availability this morning.

When asked where, within the larger concept of defensive hockey, he feels the breakdowns have come, he evenly distributed it between mistakes made simply by individuals, which you’ll always have, and larger, structual or group breakdowns. Those are the ones that are perhaps more important to correct, even if they are the harder ones to correct.

“With individuals, those are random, those are guys just making a poor play at a critical time and that happens on every team, we’re just getting a few too many of them right now,” he explained. “Then, it’s group and then it’s structure and group can be lines, maybe extending a shift and giving up a scoring chance at the 45 second mark versus being fresh. It can be structure, us not executing as well within it, or us not getting into it.”

We’ll see how those reas of the game look tonight against the Coyotes.

Madden Recalled
Lastly, Insiders, one final roster move was made today, though it came after the other six transactions the team had earlier in the day.

The Kings have recalled forward Tyler Madden from AHL-Ontario. Based off of this morning’s skate, I’m not sure if Madden playing feels likely tonight, but he is available and an option should he be called upon. The way this morning’s moves brokedown, the Kings did not have a roster spot available at the time of their 10:30 AM morning skate, with Cal Petersen’s fate not known until 30 minutes later. Once Petersen cleared waivers and was assigned to the AHL, the Kings then had 12 forwards, eight defensemen and two goaltenders on the active roster, thus an open spot. Enter Madden, who gives the team an extra option up front with no healthy scratches here this evening.

That’s all for now, Insiders, but we certainly have more to come. There’s a lot to dissect from Blake’s availability this morning and only so many hours in the day today in which to do so. As things break out tonight and into the weekend, I’ll share those remarks in full with additional observations.