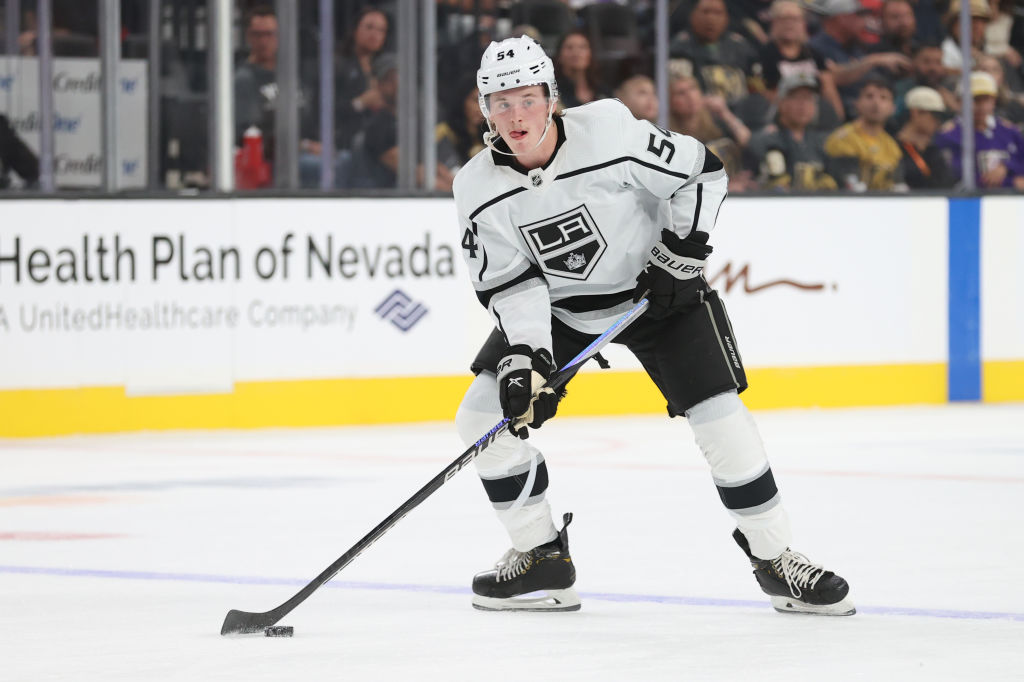 Clarke played in five games with the AHL’s Ontario Reign, which gives him a total of 14 games played this season between the Kings and the Reign.

If you look at the breakdown of games played between Clarke’s 2022-23 season and what he would have had were he reassigned to the OHL, the disparity is negligible. Clarke has played 14 professional games this season and since the Kings began their campaign, the OHL’s Barrie Colts have played just 16 games of their own. There is naturally a much higher level of competition in the NHL and AHL than in the OHL, with Clarke tested much more heavily playing professionally than he would have been in juniors. The tradeoff is naturally minutes played, with Clarke typically in line for 25+ minutes playing in the OHL versus what he gets playing professionally. Wherever you fall on that tradeoff, you can admit there are pros and cons to both sides and eventually both outcomes of the decision that needs to be made on Clarke’s future.

As we stand today, Clarke is coming off a five-game stretch during which he collected two points (1-1-2) with AHL-Ontario. Clarke scored his first professional goal in Ontario and got to play four games in eight days to conclude his time with the Reign.

In hearing from Ontario bench boss Marco Sturm, he believes that after game one, nothing seemed new to Clarke, and he played in every way like he had been there before. Despite breaking camp with the NHL club, and skating in a handful of games, his first game with Ontario was the one that brought him into double digits as a professional. From that point on, Sturm felt that Clarke played his game, engaging offensively and creating at that end of the ice while working to improve the other way.

“He [was] great,” Ontario Head Coach Marco Sturm said. “I think only in his first game, everything seemed new for him. Since then, he was outstanding. He gets involved, he’s a special kid. Like I said, he’s on the ice and then all of the sudden he shows up in front of the net and has a really good chance. Defensively he has to be more aware, but he wants to go [to the net], and its good. I think that we don’t have a player in this organization like him and I think he will be good for us in the future.”

Off the bat, Clarke was thrown immediately into a rivalry game between Ontario and San Diego. Without a practice at the AHL level, Clarke hopped right into action in Ontario on Sunday, November 13, skating on a defensive pairing with Tobie Bisson. Off the bat, the easiest part for Clarke was that Ontario does its best to replicate the language and systems being used at the NHL level.

Typically, that is in place so that when players are recalled from the Reign, to the Kings, those players already know the things they’re going to be told by Todd McLellan and his staff. In Clarke’s case, the inverse was true.

“The first thing that [Marco Sturm] told me was everything you think out there, everything that Todd has told you, that’s where we want you on the ice for us too,” Clarke said. “It was kind of seamless with where he wanted me in the neutral zone, where he wanted the puck to go on breakouts. It was pretty easy for me to just hop in and everyone knew where to be.”

In Games 2 and 3, Clarke went on to skate with veteran defenseman Cameron Gaunce, a mainstay at the AHL level throughout his career. The well-spoken Gaunce is respected amongst his peers and offers more than 750 games of professional experience as a partner. Defensively responsible, it was helpful in seeing Clarke play his game, which most seem to agree that he did when with Ontario.

Game 3 came with a milestone moment for the young blueliner, as he crashed down form the point and buried his first career professional goal in a 3-2 win over Henderson. Clarke added an assist on teammate Tyler Madden’s goal as well, for a multi-point night in the victory.

On His Goal – It felt good, especially to get it in a crucial situation, a 1-1 game late in the second period, it was a big time to get a goal and give us some momentum going into the third. It was a great situation to score in and a great team effort in front, I just picked up the loose change, so it was a good all-around play.

On His Assist – I just saw their forward was leaking a little bit so I made it look like I was going to shoot, so he had to drift back over to me, I tried to give [Tyler Madden] a lot of time. I thought he was going to one-time it, but he made the right play to catch it and he picked his spot, great shot, great play by him.

Games 4 and 5 did not see Clarke find the scoresheet, as he concluded his time with the Reign with a win over San Jose and a loss against Tucson. Clarke once again partnered with Gaunce against the Barracuda and skated with Jacob Moverare on Saturday versus Tucson, a pairing that combined two players of vastly different styles who are both angling for roles with the big club.

While he first lamented that he wouldn’t get the chance at a rematch against Tucson on the second half of the back-to-back, Clarke expressed his excitement at getting back with the group he broke came with in the Kings.

Looking at his game overall, Clarke was happy with how he was able to make plays at the AHL level and try to establish the way he wants to play, bring the things he can bring with a new club in a short time.

Clarke noted that it was nice to be back in a Top-4 role on the backend, being used as more of a go-to guy in late-game situations, both leading and trailing. As noted above, one of the tradeoffs to playing at the NHL level versus the OHL is role and usage, with the Kings having established, veteran players on defense who are preferred at this time especially when up a goal, though when Clarke was here, he was typically used more frequently when trailing.

All in all, Clarke felt his time with Ontario was successful, and he’s hopeful to take any momentum he’s built with the Reign and take it to the Kings.

“I was pretty happy with how I played, making plays through the middle of the ice, having my head up and making the right reads most of the time,” he added. “I felt really good and I feel really good with where my game is at right now. I’m looking forward to hopefully using this as momentum for things with the Kings.”

Clarke and the Kings will be on the ice today at 11, as the team returns to practice. It will be Clarke’s first, formal practice back with the team, after he took the short morning skate with the Kings yesterday. The plan for Clarke is fluid, and it should be treated as such as he works his way back into the mix with the big club today.