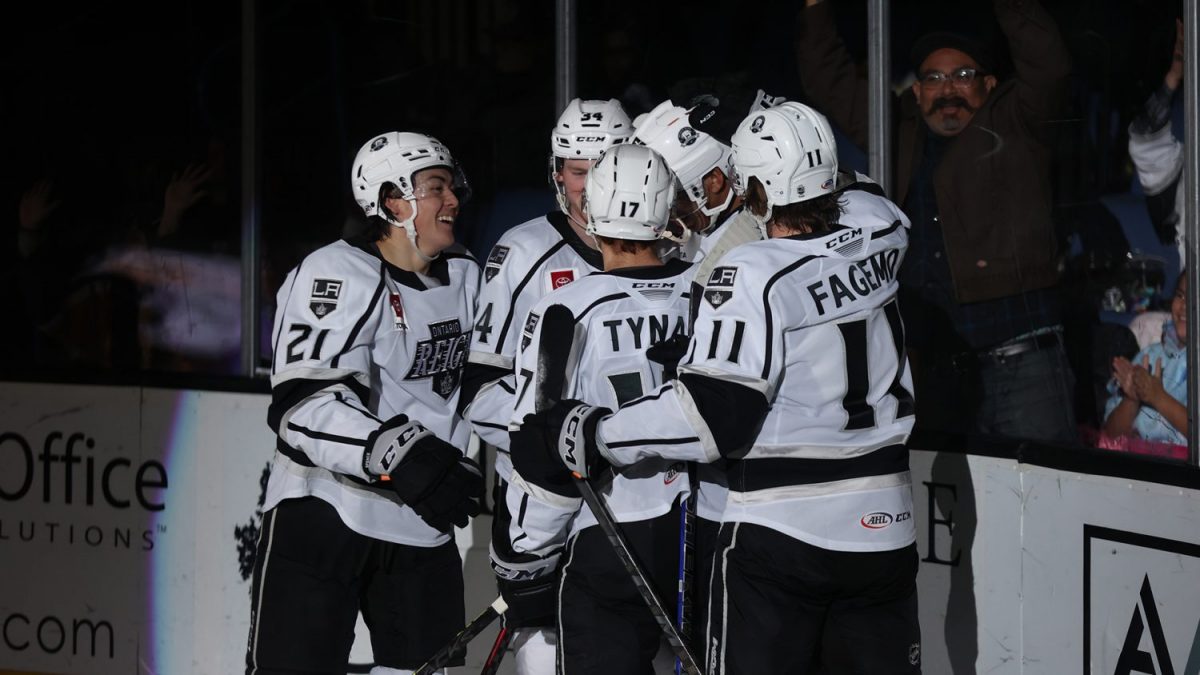 Quinton Byfield led the way with three points as the Ontario Reign (10-6-0-1) bounced back to earn a split of their weekend series against the Tucson Roadrunners (10-6-1-0) Sunday afternoon with a 4-3 win. The victory was Ontario’s 10th of the 2022-23 season.

Byfield finished with two goals and an assist, including the game-winner in the third period, while his linemate Alex Turcotte scored his first goal of the year while adding an assist on the deciding goal. Goaltender Matt Villalta also had a solid night in the crease, stopping 33 shots to pick up his fourth win of the season.

More from head coach Marco Sturm and Byfield below.

Samuel Fagemo opened the scoring in the final minute of the first with his fourth power play goal of the season from Byfield and Taylor Ward. The Reign took their 1-0 lead into the first intermission, outshooting Tucson 12-5 in the first 20 minutes.

Byfield extended the lead at 10:56 of the second, scoring a highlight-reel tally on the power play by shooting the puck in between his legs from the side of the net. The shot went over goaltender Ivan Prosvetov and into the cage, giving the Reign a 2-0 advantage. Assists on the play were credited to both TJ Tynan and Jordan Spence.

Before the end of the middle period, Turcotte got his first of the year off a pass by Tyler Madden on a rush into the offensive zone. Madden delayed and found Turcotte, the trailer on the play, with a cross-ice feed into the slot. Turcotte unleashed a powerful wrist shot that beat Prosvetov up high into the top right corner of the net and made the score 3-0.

The Roadrunners mounted a comeback in the third, however, and Nathan Smith was the first man to beat Villalta on the day, scoring on a short-side wrist shot with 11:49 to go in the game to cut Ontario’s lead to 3-1.

With just 4:19 to play, Byfield gave the Reign extra insurance that turned out to be key, using a wrist shot on a 2-on-1 rush to score his second goal of the game and give Ontario a 4-1 edge on the scoreboard.

But Tucson wasn’t done, scoring goals at 17:25 and 18:01 to make it a one-goal game with two minutes remaining. Laurent Dauphin had the first on the power play before Jean-Sebastien Dea netted the second with an extra attacker on the ice and Prosvetov at the bench.

Ontario calmed things down in the closing seconds and held on to earn two points that allowed them to regain a share of third place in the Pacific Division standings.

Two of Ontario’s goals came on the man-advantage, which finished 2-for-3 in the contest, while the Roadrunners ended at 1-for-3 on the power play while holding a 36-30 edge in shots on goal. Prosvetov stopped 26 shots for Tucson in a losing effort.

Marco Sturm
On rebounding from last night’s loss
I think, overall, the guys responded from last night. I think we were all not happy and today we played like a team, and that was the difference. I think we had some good chances and a lot of opportunities. We just didn’t bury them. I think we play better when we win on special teams, but not every night is like that. We’ve got to make sure we bury our chances at five-on-five. Tucson is a good team. They play defensively very well. They didn’t give us much and we know it was going to be a tight game, and it was, just like last night.

On the Turcotte-Byfield-Madden line
They had an off night yesterday and today they responded big time. That’s what we need. They’re some of our best players and the best players have to be the best players every night, especially with [Quinton]. There are some expectations from us and from the organization, and for sure from him too. He needs to be the guy, and yesterday he wasn’t, and today he was big time. It was nice to see him have a really good game.

On Villalta’s performance in net
He was nice and calm. He felt good all day. He made some key saves, unfortunately he got beat and that shouldn’t happen, but we were very, very happy about his game.

On almost a full week off before playing Colorado
In my experience so far, [the breaks] are good and bad. I think its good when you win, and its bad when you don’t win. When you don’t win, then its going to be a long, long week. I’m glad we won today so we can have a better week. I think a better mood, atmosphere and energy, because that’s what we need. We’re going to work and use this week to repair a lot of things and try to come out against a really hard Colorado team. Its not going to get easier. We’re going to enjoy the day off tomorrow and then go back on and get back to work on Tuesday.

Quinton Byfield
On the team’s strong start
I think we had a great first period. All four of our lines were going. We were getting a lot of shots, and we outshot them. I think we’re playing the hockey that we want to play, so it was a really good first. To get on the board and get the lead first is definitely huge, especially for the power play.

On the impressive game from him and his linemates
Maybe the other game we just weren’t all on the same page. Maybe a little disconnected. In prior games, we had a lot of chemistry and a lot of little touches in between, and players were creating plays, so I think we just got back to that. We usually match against their top line, so that’s a big role for us to play. I think we did a pretty good job there and we had a good game tonight.

On his between-the-legs goal
I’ve tried it a couple times and I’ve lost the puck in other games. When Tynan hit me, I knew they were covering Fagemo pretty well there on the far side. I tried to go to Ward in the middle and we got a couple opportunities, so I just thought it was best to get the puck to the net there, and I think that was the best play for me.

After a week of practice, the Ontario Reign will be back at Toyota Arena on Friday night to host the Colorado Eagles at 7 p.m.