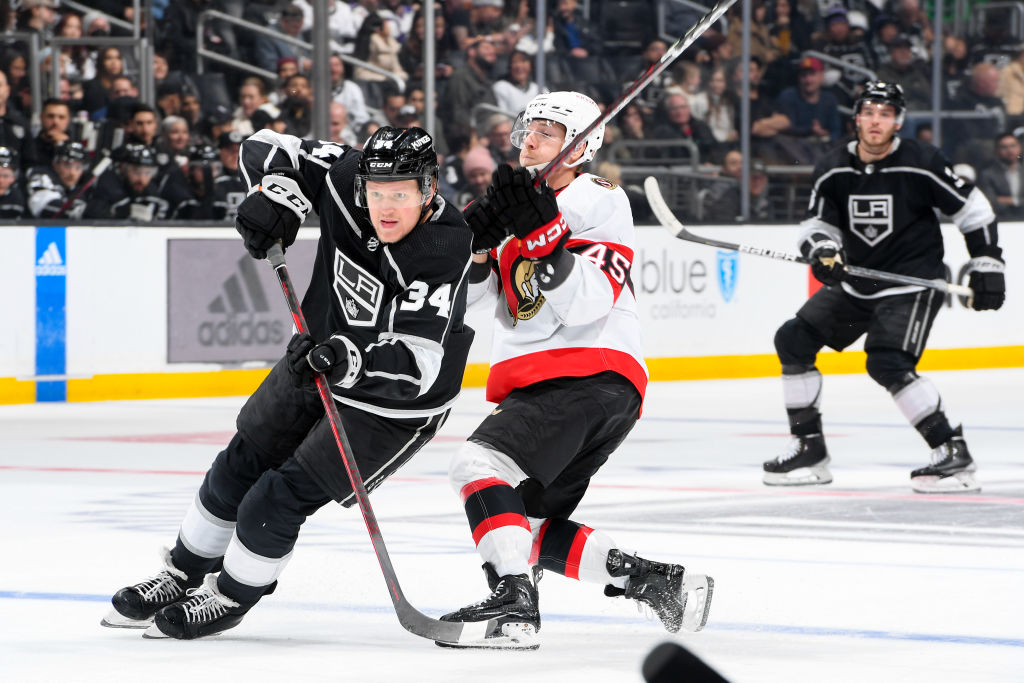 The LA Kings opened a four-game homestand with a point but fell by a 3-2 final in overtime against the Ottawa Senators.

The Kings got a pair of goals from Arthur Kaliyev, both of which came on the power play, in the victory. Jonathan Quick made 36 saves on the evening, his second highest total of the season.

Ottawa controlled shots on goal by a 19-8 margin in the first period and found the only goal of the frame through forward Brady Tkachuk. A shot from the point by defenseman Thomas Chabot was deflected wide by a Kings stick, but the puck deflected off the end boards right to Tkachuk, who buried at the near post for his ninth goal of the season.

The Kings answered midway through the second period with a power-play goal from Kaliyev to knot the score at one. After a series of puck retrivals and quick passing throughout the unit, forward Viktor Arvidsson found Kaliyev through a low-to-high seam, with the latter one-timing the feed past Ottawa netminder Cam Talbot for his seventh goal of the season.

Ottawa answered less than two minutes later, however, with a power-play goal of its own to re-take a 2-1 advantage. On the first Senators man advantage of the evening, forward Alex DeBrincat one-timed a shot from the bottom of the left-hand circle that beat Quick to the near post to put the visitors back ahead.

Kaliyev struck again, however, with his second power-play goal of the game to push the score level heading into the second intermission. After another controlled sequence, defenseman Sean Durzi fed Kaliyev at the right-hand circle, where he gathered and fired his shot past Talbot on the blocker side for the tying goal. Kaliyev’s multi-goal game was the first of his NHL career.

After the teams traded chances in the third, but neither team found the back of the net, Ottawa won the game just 20 seconds into overtime. Tim Stutzle sent a backhanded pass from his own net through the middle to a streak, uncovered Claude Giroux, who deked to the forehand and put home the game-winning goal.

Arthur Kaliyev
On what he felt was clicking so well with his power-play unit tonight
Retrieving pucks, we did a really good job of that after getting shots. We started the power play and we didn’t convert on those shots, but we got it back and we made something out of it. Great plays by Arvy, Phil, everyone.

On if he felt his goal late in the second gave the team some momentum heading into the third
Yeah, I think it did. The third period was far more defensive, not much was given up at 5-on-5. It was one of those games when whoever got the first big chance wins.

On using his shot this season and if he feels more comfortable in doing so
Yeah, I think so. Reading off what other players are doing and finding the lane to shoot. Yeah, I feel more confident doing that.

Todd McLellan
On if he felt the power play gave the team some life tonight
We needed something, because we sure didn’t start the game very well. Power play obviously gave us some life, it gave us a chance to crawl back into the game. For as poorly as we were playing, it didn’t get away on us, so that was a good thing, but the power play did do a real good job of allowing us to find our game as the night went on.

On what he felt went wrong in the first period
Our passing was atrocious, but our thought process into where we were setting the pucks and passing was even worse. So, you combine that with those two things together and we were making it fairly easy on them. They have some structure, in a system that you can’t be stubborn and play through and you’ve got to play behind it a little bit. I thought we did that in the second and third.

On the importance of puck retrievals on the power play tonight
It’s hard to beat penalty kills when they’re in position. You look at the goal that we gave up tonight, we were just out of position a little bit, but it comes off a scramble play or a retrieval and that’s a big part of a power play. Again, Jimmy Hiller has been doing some really good things with our power play and the tree is starting to bear some fruit, if you will. Guys have to continue, but unless there’s a real strong work ethic to it, it doesn’t matter who you bring in or what he’s trying to do with the group. Our power play has had some good work ethic lately and it’s getting rewarded.

On Arthur Kaliyev and his willingness to use his shot on the power play
Teams that have that element of a shot from there, that can score from distance or just powered by goaltender, you have to respect it and it can open up space for other players. If you don’t have it, they can cheat. They don’t have to worry so much about that side. I think you only have to look at number eight in Washington to see how that works. I’m not saying that Arthur is Ovechkin by no means, maybe later on his career he’ll get there, but they both have that element of a shot from that spot. Obviously different hands, but you have to respect it and opens up ice for others.

*Forward Gabe Vilardi missed tonight’s game with an upper-body injury. McLellan shared after the game that the team knew about the injury after the game in San Jose. Vilardi is currently considered day-to-day.