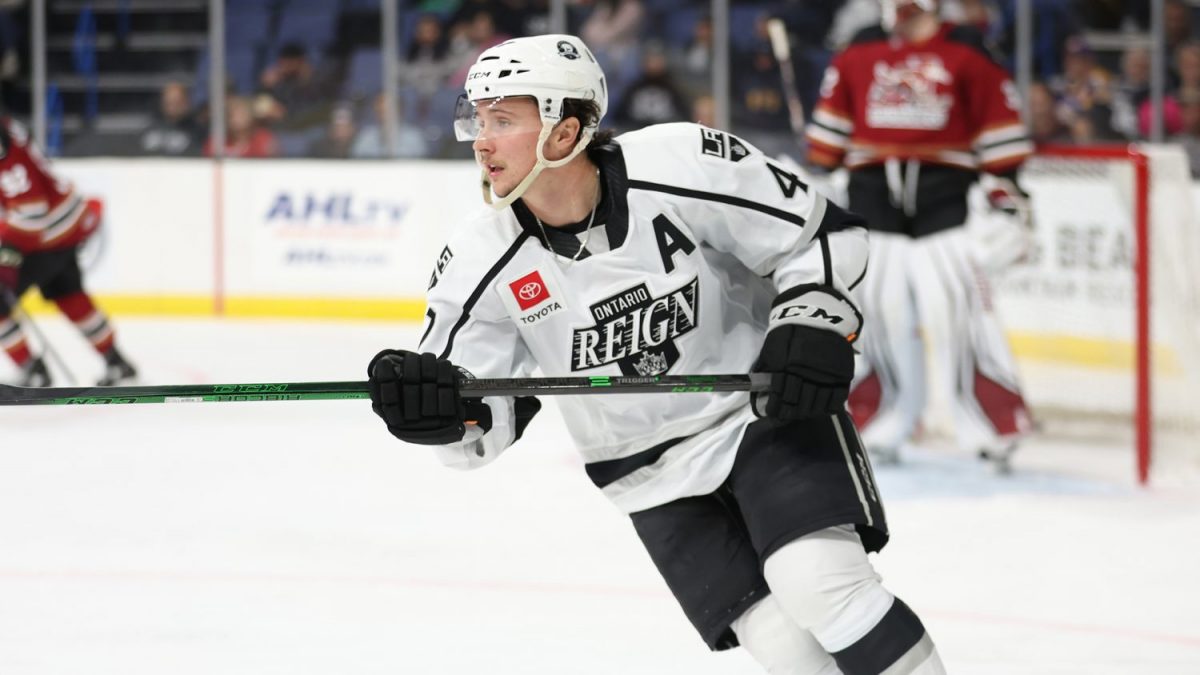 After trading goals in the first period, a power play goal by Jean-Sebastien Dea was enough offense for the Tucson Roadrunners (10-5-1-0) to defeat the Ontario Reign (9-6-0-1) in the teams’ first matchup of 2022-23 to begin a two-game weekend series on Saturday night at Toyota Arena.

Forward Aidan Dudas netted the lone goal for the Reign during the first period, which came with assists from Samuel Helenius and Martin Chromiak. Pheonix Copley made his third straight start in between the pipes for Ontario, stopping 32 shots in a losing effort.

Tucson controlled many of the chances in the opening period and broke through first late in the frame to grab an initial lead at 17:08 on a deflection at the side of the net by Travis Barron to make it 1-0.

Ontario responded quickly with an equalizer before the end of the frame. On a rush for Helenius into the offensive end, the puck got pushed back toward the point where Chromiak was trailing the play. He attempted a pass that went off the leg of a Tucson defender and then off the right pad of goaltender Jon Gillies to Dudas, who quickly scooped it up and put it into the net to tie the game at 1-1.

The Roadrunners regained the lead early on in the second after a high sticking penalty to Helge Grans. A one-timer by Dea floated past an outstretched Copley to put Tucson ahead 2-1 at 1:47. The Reign were unable to get any closer in the second and entered the third period trailing by a goal.

In a late bid to tie the game during Ontario’s only power play of the night, forward Alex Turcotte came within inches away from an equalizer, but the puck went off the crossbar and the left post, staying out of the net. The play was reviewed by the on-ice fficials and eventually upheld as no goal with just over 9 minutes to play in the third.

Then with Copley at the bench in favor of an extra attacker, Adam Cracknell stole the puck in neutral ice and hit the empty net to give Tucson insurance at 3-1.

Dea’s game-winner was the only power play goal of the evening, with Tucson finishing 1-for-3 on the man-advantage while Ontario was 0-for-1. The Roadrunners ended with a 35-32 edge in shots on net and Gillies turned aside 30 shots to earn his fourth victory of the season.

Marco Sturm
On his team’s play in tonight’s loss
I think tonight was more about us. We had a really good week. I thought we had a good game here [Wednesday] and had a good practice, but we were kind of flat today. Especially in the first period, Tucson was just quicker than us. It was a tight game. We had our chance in the third with the power play and could’ve made a different, and we didn’t, so that was it. [Tucson] keeps things really tight. They play a solid team game. We knew that before the game today, but I think it was just more on us.

On Brandt Clarke during his conditioning stint
He’s been great. I think only in his first game, everything seemed new for him. Since then, he was outstanding. He gets involved. He’s a special kid. Like I said, he’s on the ice and then all of the sudden he shows up in front of the net and has a really good chance. Defensively he has to be more aware, but he wants to go [to the net], and its good. I think that we don’t have a player in this organization like him and I think he will be good for us in the future.

On Jacob Moverare, who stuck up for TJ Tynan with a fight in the third
Not just as a player, but that shows the kind of person that he is too. He has been great. We all love him; the players, the coaches. Today, that [fight] doesn’t surprise us. He’s been outstanding and that’s good for him. It should jack the other guys up and they should get all excited for this, and hopefully tomorrow, that happens.

Aidan Dudas
On how he has continued to develop his game
I think I still need to build more consistency in my game. It’s nice now to be in my third year and feel more confident out there and make the right plays, but I think the biggest thing for me is just a little bit more consistency. I think I’m just trying to get to the net more often. When I find myself in a little slump, I think getting into the dirty areas and getting a little more gritty helps me get back in the flow of the game. I think that’s been one of the biggest things for me [this season].

On tonight’s loss and preparing for tomorrow
I think we need to find more consistency as a team, as well. We kind of started off slow, gave up a couple odd-man rushes, but I think for us, we know we have the ability in our room. We have the talent. We have the skill. We have the players to win every game and I think it just comes down to being mentally prepared. I think we’ve got to put that game behind us. Obviously, we’ll look at things but the game is done and over with. There’s not much else we can do other than get ready for tomorrow.

The two teams are back at it again on Sunday afternoon to close out their weekend set beginning at 3 p.m. inside Toyota Arena.