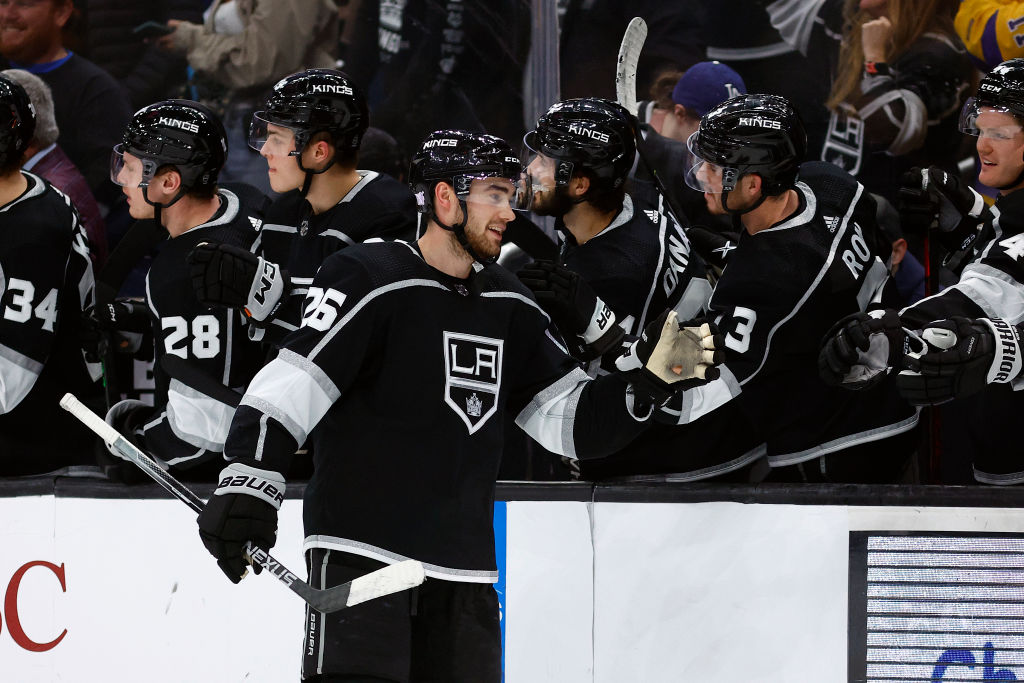 Back at it this morning, Insiders!

First things first, here’s how the group lined up during this morning’s practice –

No apparent changes from yesterday’s group, though we did see a return to the group in defenseman Sean Durzi. Yesterday, the Kings only had one, healthy and available option in forward Lias Andersson. Durzi is dealing with a lower-body injury and is still considered day-to-day at this time. Doesn’t feel far off for him, though. Forward Alex Iafallo is progressing on his own return, but has yet to re-join the group for practice. Defenseman Brandt Clarke is still occupying a roster spot, as he continues his conditioning loan with AHL-Ontario, and is expected to play game four at the AHL level this evening with the Reign.

Where that leaves the Kings, in the here and now, is without a ton of flexibility in the short term. The Kings could potentially insert the versatile Andersson into the lineup, who can play both center and wing, but for at least the next few days, as the situations with Durzi and Clarke sort themselves out, options beyond that remain at the whim of their status.

A few quick hitters from today’s practice, with stick taps going to Jesse Cohen, who was on-site today to snag audio from the locker room.

Walks This Way
Good to see Sean Walker get one last night, wasn’t it?

It’s been a long-time coming for a player who has not scored in an NHL game since the finale of the 2020-21, COVID-shortened season. Walker scored a breakaway goal in that game, the only goal the Kings scored during two, season-ending losses against Colorado. Walker had two assists, but no goals, before he suffered a season-ending knee injury during game six of last season.

Walker has been moved around the lineup a bit this season, starting off on the left side with Matt Roy, but eventually settling in on the right with Alex Edler and now Jacob Moverare on the third pairing. Walker’s underlying metrics have been right around neutral, with Corsi trending just above 50 percent and the higher-quality chances trending just below. Over his last 10 games, however, Walker has found himself on the wrong side of high-danger chances just once, and on the wrong side of shot attempts and scoring chances just twice. He’s gotten more and more comfortable and his on-ice metrics are a glimpse into that, with goals for and against coming in exactly even. An uptick for sure, as he’s gotten more and more comfortable coming off of his injury.

Last night, Walker was rewarded for that uptick in play, with the game-tying goal early in the third period. It was a long-time coming for Walker, who hit the crossbar in the first period and has had more and more looks offensively as of late. Walker had a season-high seven shot attempts yesterday evening, as well as season highs in scoring chances (5) and high-danger chances (4). His goal felt like a culmination of his increase in the chances he’s providing, which is a good sign for the shifty blueliner moving forward.

Hear from Walker from earlier today, discussing his play as of late as he’s settled in.

First Line Firing
“I thought that Anze and Kempe had perhaps one of their better games lately and that’s probably due to the fact that Kevin was there, helping them out. When I say that, I’m not demeaning Gabriel Vilardi’s play, he’s been really good. Just a different mix tonight, a different energy on that line and I thought that line gave us a game maybe that we hadn’t seen in a little bit.”

That was Todd McLellan from after yesterday’s game, as he shared his thoughts on his top offensive unit.

The Kings made one major lineup change headed into last night’s game, with Kevin Fiala re-joining the line alongside Anze Kopitar and Adrian Kempe. The results were immediate, with Fiala scoring the game-opening goal 36 seconds into the game, and contributing with a pair of assists on the other two Kings goals. When he originally switched that line up when they were first playing together, McLellan felt they got outchanced too frequently. Being that Kopitar is the center of the line, that means being outchanced against top-level competition, because of his two-way nature.

Last night, however, it was not an issue. Though one of their goals came on the power play, the top unit was involved on all three Kings goals on the evening, including the third goal which came from Walker. The statline at the end of the night read eight scoring chances for and three against at 5-on-5, the best metrics the Kings had from an offensive unit. Looking at their game log, +6 was the season leader in the clubhouse when it came to controlling scoring chances and last night was just one behind that mark.

Hear from forward Adrian Kempe below, as he discusses the new, yet old, look of his line.

Admittedly, I have not had the opportunity to listen to Todd McLellan’s availability yet from earlier today. So I will dissect that and perhaps add back in.

One additional quote from TM from last night, however, talking about save percentage and how he believes it applies to the concept of the team, not just the two players who play in net. The question gave those perimeters, which McLellan agreed with,

“I would say there’s concern, yeah, but you also qualified it as I would, that when we mis-handle a puck on the blue line and give up a breakaway, that’s a pretty darn good save. When our goaltender loses a stick for whatever reason, someone breaks their stick and he’s got to dive across, it’s pretty damn good save. [Petersen] made a really good one on Panarin in the first period, so he’s making some real good saves, so has Jonathan, but we’ve got to as a group work on that save percentage. It’s not just the goaltenders, but as a group, we’ve got to bring that number up.

Thanks for listening, and following! I was not at today’s skate – a rare day to be able to spend with family from the East Coast – so a huge thank you once again to Jesse Cohen for filling in with some in-room interviews! Likely a light day tomorrow here on LAKI before we get back to game coverage on Friday morning.

By Zach Dooley
108 Comments
Behind the Scenes