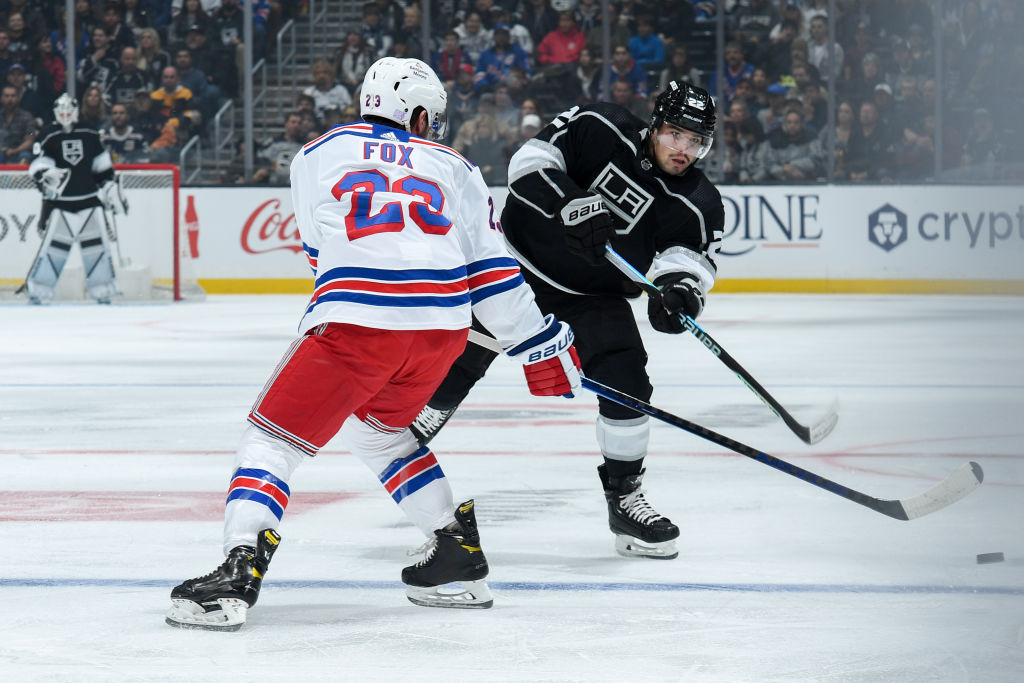 The LA Kings opened up a stretch of six straight games in California with a 5-3 defeat against the New York Rangers on Tuesday evening at Crypto.com Arena.

The Kings got three points from forward Kevin Fiala (1-2-3), while forward Anze Kopitar (0-2-2) also had a multi-point night.

The Kings opened the scoring less than a minute into the game, as the newly reunited first line all got in on the action. After an Adrian Kempe shot was saved by New York netminder Igor Shesterkin, Fiala got a hold of the rebound in front and slotted it through the five-hole for his seventh goal of the season. Kempe and forward Anze Kopitar collected the assists on the play as the three players skated together from the start for the first time this month.

Vilardi put the Kings ahead by a pair as the Kings scored a power-play goal to bring a 2-0 lead into the first intermission. After he took a feed from defenseman Drew Doughty, Fiala walked in from the right point and fed a seam pass to Vilardi, which he redirected home at the back post for his team-leading 11th goal of the season.

The Rangers responded with two goals in the middle stanza, however, to tie the game at two. First, just 2:22 into the second period, defenseman Braden Schneider sent a shot from the right point that evaded heavy traffic in front of Kings netminder Cal Petersen to get the visitors on the board. New York tied the game on a flukey play, as Doughty stepped up on forward Vincent Trocheck, but the clash of stick sent the puck into the air, over Petersen and in to knot the game at 2-2.

New York surged ahead with just over a minute to play in the middle stanza, as forward Kaapo Kakko cleaned up the garbage in front of Petersen for a 3-2 advantage. New York took advantage of a delayed penalty and an extended shift for the defending group of Kings on the ice to take its first lead of the evening into the second intermission.

The Kings tied the game midway through the third period following a wild sequence at both ends. First, an extended stretch that saw the Kings with as many as three players without sticks resulted in a goal-saving block from defenseman Alex Edler and a diving save from Cal Petersen, before the Kings eventually went the other way and scored. The final shot came from Sean Walker, who buried his first goal from the center point, off an assist from Kopitar.

The visitors surged ahead just 50 seconds later, however, as Mika Zibanejad intentionally iced the puck, with forward Chris Kreider winning the race and one-timing the puck off the boards, beating Petersen to the near post. Kreider then added an empty-net goal late to ice the game at 5-3.

Alex Edler
On what changed in his mind between the first and second periods
Yeah, I think we had a good first and I think it was kind of the opposite in the second, they had a good second. We scored two, they scored three, and then we battled back and tied it up, but they scored right after. It’s hard when you’re trailing.

On the backbreaking nature of the fourth goal, 50 seconds after the Kings tied it
We always talk about those shifts right after a goal, it’s tough when you work hard and tie it up and then they get one right after. Those things happen.

On seeing his partner, Sean Walker, get his first of the season
Yeah, that was very nice. He’s been really close for a while, so it was nice to see him get one.

On how he feels through 20+ games this season and if he’s had any conversations with Todd McLellan about his minutes
We talked a little bit before the season, but I think I’ve been around 15 or 16 minutes up until the last few games, but that’s what happens when someone gets hurt, other guys get more ice time. I feel good, my body has felt good all season long so I’m ready to play whenever I’m needed to play.

Todd McLellan
On his takeaways from an up and down game
We had a real good push in the first, I thought we were an aggressive team, we were on our toes a little bit, we were connecting passes and plays. The break came, we went out and the first two shifts of the period we gave up pretty good scoring chances, so they came with their push and we didn’t respond really well. I thought after that, we sat back a little bit, we were slow, we didn’t connect on the passes that we were connecting on in the first period. You have to give them credit, they pushed, but their push was a lot stronger, a lot more aggressive than ours in the second. Third period came on, I thought it was a pretty even period. We scored, obviously we were excited about that and then all of a sudden, boom, it’s out, the air is out of your sails again. Our game tonight has matched our year, where we’re inconsistent, we’re up and down. Whether it’s within a game, whether it’s two-game segments, one-game segments, back-to-backs, we’re still searching for that.

On the difficulty of getting back to it after the fourth goal against came so quickly
It’s hard. Both of these games we’ve had to fight and claw from behind, which also sounds strange because we had the lead in tonight’s game, but once we got back in and we were fighting and clawing our way there, you could feel a little momentum building. We scored the goal, we get that big save and then 50 seconds later it’s in our net again on one that we should probably have. It’s tough, but you’re not always dealt an easy task or an easy game and you should be able to push back. I thought we sagged a little bit when we could have pushed a little harder.

On expecting a push from the Rangers when they got it in the second period
I think you have to expect that, we’re in the NHL, just like we responded in the third. I thought we came out and played an aggressive game. Teams get the opportunity to regroup between periods and the good, consistent teams are able to keep it at an even keel. They also scored at the 18-minute mark in the third period, so a lot of that set us back, but we were able to regain it in the third. We didn’t have it between the first and second.

On if he felt Cal Petersen should have had the fourth goal, and his play overall
Yes he does, Cal has to make that save, Cal made some outstanding saves and the difference is……Cal was playing without a stick, we had two broken sticks, Edler blocked it and Cal punched it out. If that goal goes in, maybe we recover, I don’t know. The one that we did let in took a lot of life on our team. He stopped a breakaway after that. We mishandled the puck at the blueline and Cal made some really good saves. Sometimes it’s the one that you need, rather than all the ones you made, that makes a difference in the game and we needed that one.

Notes –
– Kevin Fiala (1-2-3) registered his sixth multi-point game of the season, extending his season point total to a team leading to 21 points (7-14-21).
– Gabriel Vilardi (1-0=1) scored his team-leading 11th goal of the season, establishing a new career-high. Vilardi is tied for eighth in the NHL in goals so far this season.
– Sean Walker scored his first goal of the season and registered his second point in as many games.
– Anze Kopitar (0-2=2) tallied his 266th career multi-point game and ranks second on the Kings with 13 assists this season.
– At +13, tonight was the Kings third-largest shots on goal differential of the season. Their 36 shots on goal at 5-on-5 was the second-highest total of the season.