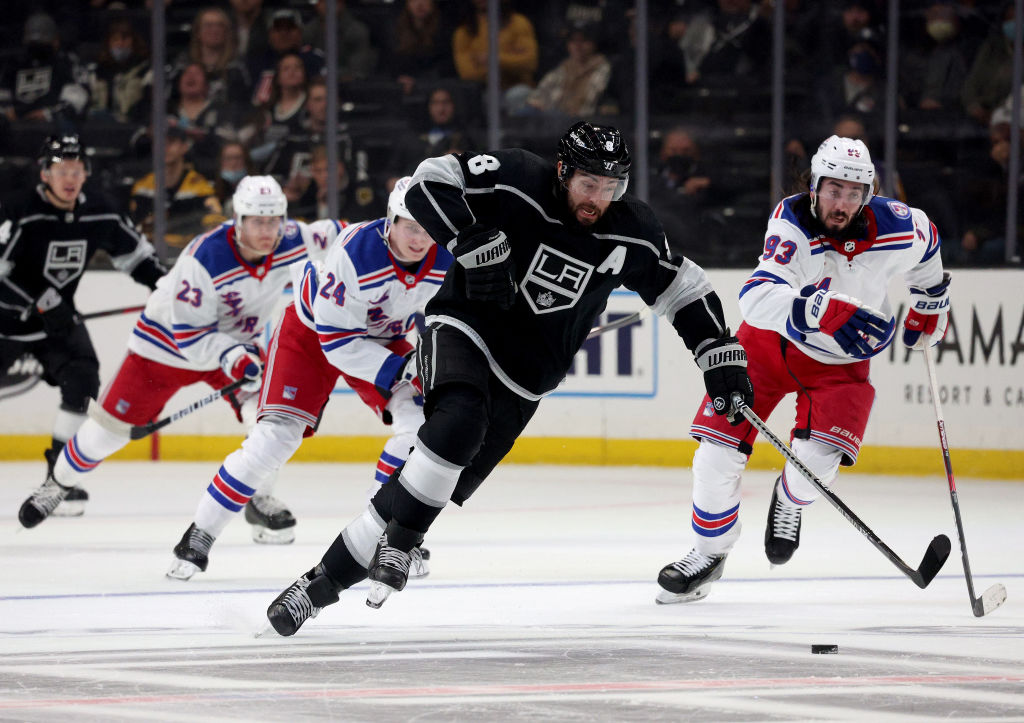 TONIGHT’S MATCHUP: The Kings are back on home ice this evening for the first of six straight games in California, with five of those games being played in Los Angeles.

HEAD-TO-HEAD: Forward Trevor Moore led the Kings last season against New York with three points (0-3-3) from two games played. Forward Blake Lizotte led the team with two goals versus the Rangers, scoring in each game, while forwards Adrian Kempe (1-1-2) and Anze Kopitar (0-2-2) each had two points from two games played.

Goaltender Cal Petersen was off first this morning for the Kings, indicating that he is in line for tonight’s start versus the Rangers. Tonight would mark Petersen’s second consecutive start, the second time he’s done that this season. Petersen faced New York for the first time a season ago, as he made 22 saves on 23 shots in a 3-1 victory at Crypto.com Arena.

Based off of yesterday’s practice and this morning’s skate, here’s a potential projection of how the Kings could line up this evening against the Rangers –

Drew Doughty, who missed yesterday due to personal reasons, is good to go tonight and will play against New York. The Kings have just six available defensemen – Sean Durzi is still on the active roster but is currently day-to-day with a lower-body injury. He will not play tonight against the Rangers. With Brandt Clarke on a conditioning loan to Ontario, the Kings are not able to recall a defenseman at this time, without a corresponding move, and will roll with the six who are available. Forward Lias Andersson is the only healthy extra skater, and will take warmups tonight, with final decisions to follow.

RANGERS VITALS: New York is in the midst of a four-game trip on the West Coast, entering tonight’s action with a 1-0-1 record. The Rangers finish their travel tomorrow evening in Anaheim.

The Rangers did not hold a morning skate today, so we’ll assume for now that Vezina Trophy winner Igor Shesterkin is expected to get the start between the pipes this evening for the Rangers. Shesterkin, all-time, is 2-0-0 against the Kings, with a .962 save percentage and a 1.45 goals-against average.

Per Mollie Walker of the New York Post, here’s how the Rangers aligned during yesterday’s practice –

New York defenseman Adam Fox leads all blueliners in the Eastern Conference with 21 points (6-15-21) from 18 games played this season. Rangers forward Mika Zibanejed is tied for the NHL lead with seven power-play goals, as a part of the NHL’s ninth-ranked power-play unit.

F1ALA
“In the games, just reading off of everybody else and the system, I feel very comfortable. I know what I’m doing, I don’t have to think the game anymore and I’m just playing right now. It’s good.”

That was Kevin Fiala this morning, speaking about his comfort level with the Kings now over 20 games into his tenure with the organization. Fiala started the season with a new team and as the team did, he had his share of ups and down as he adjusted to playing a new way, with new linemates and a new team. A shuffling of the lines has shown us some of the best of Kevin Fiala, and that best is pretty damn good.

While he said that there are still some drills that are new to him in practice, he’s adjusting and adapting to the language used by coaches and he feels as comfortable as he has with the system the Kings are looking to play. Very good signs. With that comfort level, as he said above, he’s just playing the game and not thinking it, something his head coach sees as a good sign.

“You’re always going to be a step slow, either physically or mentally, if you’re thinking the game [rather than] if you’re just playing it,” McLellan said. “You have to have a little bit of structure so you’re predictable. I think Kevin’s past that thinking point, certainly if he’s admitting it, he is. I think it’s showing in his play.”

Now, on take two on a line with Kopitar and Kempe, Fiala believes that he’s ready to roll.

It’s three players, all of whom share the responsibility for what wasn’t working in the earlier stint. Fiala has shown what he can do since and leads the team in scoring entering tonight’s action. He’s a dynamic player with the puck on his stick and a constant threat to create offensively, whether with his passing or his ability to. score. You naturally want to give that player more minutes and more responsibility and this is a way to do that. As he’s gotten comfortable with the system, he believes he’s better equipped to be successful this time around.

“I try to play my game, but I don’t think that was the case at the start of the season,” he said. “When I was [on this line] at first, I didn’t do it. I didn’t have the puck so much and I didn’t skate as much. Now, I’m just more comfortable overall and with the system, with everything really. I feel more comfortable around those two guys and I just have to play my game, have some fun and everything else will settle.”

Penalties and The Kill
The numbers are the numbers, and the numbers say that the Kings have reduced their overall penalty output from October to November.

In October, the Kings were shorthanded an average of 4.5 times per game, a clip that has fallen to 2.5 here in November. Good signs, for sure, but the trip to Western Canada showed a few of those lesser penalties creeping back into the team’s game in the eyes of Head Coach Todd McLellan.

“It’s interesting that you notice that and it’s true, they’re significantly down, we’re better checking skills and we’re not taking as many families, but this past road trip, we had numerous penalties in the offensive zone, we had some on the power play. So, for as much as you recognize us fixing, I’m also thinking about is it sneaking into our game again? I think in Calgary, we took the three in the o-zone, one on the powerplay and another one in Seattle in the o-zone. Too many.”

Drew Doughty put it perfectly – If you’re going to take a penalty, make it count. 200 feet away from the net isn’t the time or the place to take an unnecessary hooking penalty because it’s not preventing a scoring chance. If you’re hauling someone down to prevent a breakaway, sure, you take the call. But it’s the other end of the ice the Kings are focusing on narrowing down. Overall, these types of penalties are down for the Kings and that’s a good sign.

But the penalties taken also leads into the penalty kill, an area of focus for the Kings, as they look to limit the goals against.

“If we’re going to take a penalty, we want it to be a hard play in the d-zone or something like that, but we still need to improve on the PK, we’re letting too many in,” Doughty said this morning. “That’s on the players. We have made a bigger effort in blocking shots as a whole, both on the PK and 5-on-5, so I’m really proud of that, but the bottom line is that teams can’t be scoring all the time.”

Doughty gave some good insight into the notion of improving on the kill. It’s not really a systematic thing, but it’s a situation where, in his mind, he wonders if the group as a whole is maybe gripping sticks a bit too tightly when it comes to getting clears, or overthinking things as opposed to just executing, similarly to the notion of what Fiala discussed above.

“I don’t think there’s just one play that’s affecting us, they’re kind of scoring on different types of plays,” he explained. “When things don’t go well, you’re going out there, gripping your stick really hard, like ‘I don’t want to be the guy out there that’s going to make a mistake for another PK goal’ and I think we kind of have that in our heads right now. That’s something we need to learn to get out, because when you go out there and grip the stick too hard, things always go wrong. It just seems to always happen that way, so we need to it get out of our heads. We can have a very good PK and we will and hopefully it starts with tonight.”

The easy answer is to kill penalties and build confidence, as Doughty also spelled out. Doughty discussed the importance of getting clears on the kill, which was something that McLellan also brought up. The thing with clearing the puck is you can’t really practice it, because no two plays shake out the same way. It’s something you have to read and react to and feel during game play.

Doughty took the onus on himself for a game in the preseason when clears were an issue, but believes that the answer comes through confidence, even if he’s not exactly sure how to get there. Stringing a few kills together, hopefully starting tonight, goes a long way.

“I think it just comes with building confidence and killing a bunch of penalties off and then eventually that thing will be out of your heads.”

Rushing Rangers
Lastly, Insiders, a point of emphasis for the Kings this evening.

Todd McLellan talked about how good the Rangers are, as a team, in gaining the zone and creating offense off the rush. A point of emphasis for the Kings during yesterday’s practice that the Kings will look to take away.

“The New York Rangers do a tremendous job on their entries. They activate the D all the time and we must be aware of it, we must understand how they put themselves in that situation so that it doesn’t always be an out-numbered rush. We started the year poor in that area, got really good and then it stepped away on us a little bit. We spent yesterday talking about those situations in practice and let’s see the group apply it tonight.”

Kings and Rangers, tonight at 7:30 PM from Crypto.com Arena!