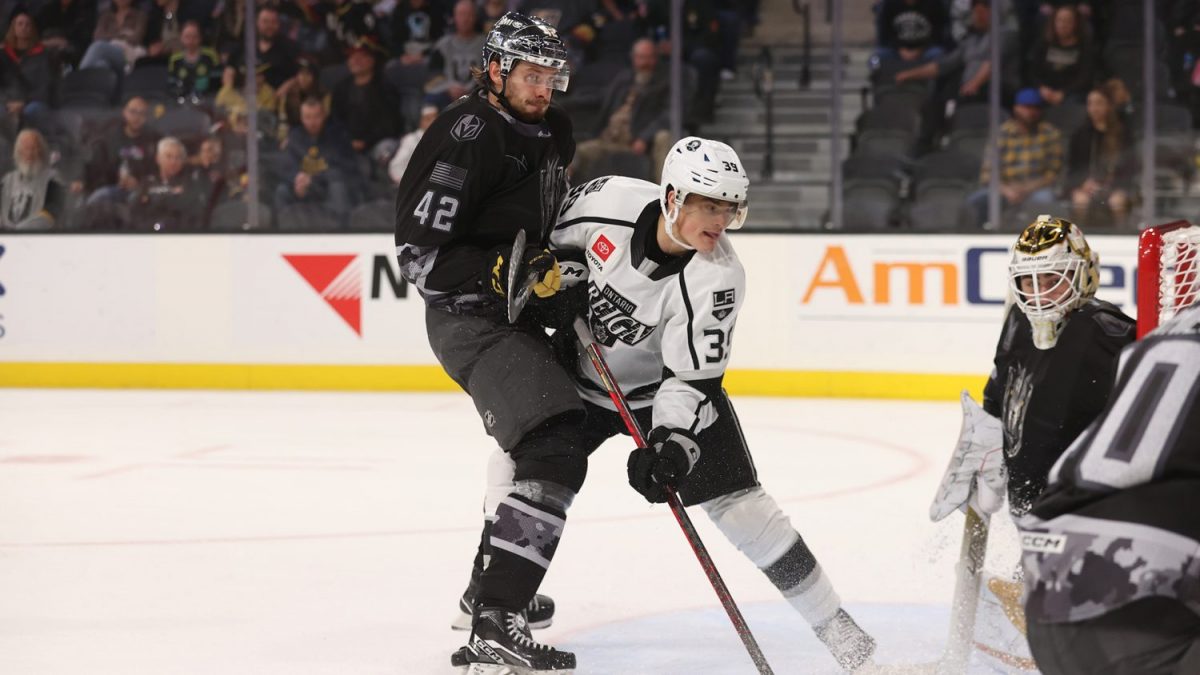 The Henderson Silver Knights (5-11-0) scored twice in the third to take control of an even game that had been deadlocked after each of the first two periods and ultimately defeat the Ontario Reign (7-5-0-1) by a 3-1 score on Saturday afternoon at The Dollar Loan Center.

Tyler Madden netted the only goal of the day for the Reign in the second period, while goaltender Matt Villalta made the start and turned aside 23 shots in a losing effort that included multiple breakaway denials. Villalta kept his goals-against average at 2.04 and his save percentage at 0.930 for the season, both of which rank in the top five in the AHL.

The Reign outshot Henderson 12-9 in the first 20 minutes but were unable to get anything on the scoreboard to show for their efforts.

Daniil Miromanov put the Silver Knights ahead 1-0 at 8:06 of the second, using a wrist shot from a bad angle to sneak the puck past Villalta at the near post.

4:16 later, Tyler Madden poked home a loose rebound in the crease to the tie game at 1-1. Madden secured the puck off a turnover by Henderson in their own zone and fired a wrist shot from the slot that was stopped by goaltender Jiri Patera. But the biscuit remained loose in the crease due to heavy traffic in the blue paint from Quinton Byfield and Madden found his own rebound to even the score.

The game remained even until midway through the third after Villalta came up with multiple highlight-reel saves in the opening minutes of the final period. The netminder stopped a 2-on-0 chance in the first minute and then a breakaway look about five minutes after that.

Henderson regained the lead for good during a power play opportunity at 10:09 when Gage Quinney knocked the puck out of the air and behind Villalta on a rebound after an initial save by the goaltender.

Ontario responded with pressure in the offensive end and had a chance to tie the game back up on two power play opportunities of their own, but they were unable to put anything past Patera. The Silver Knights netminder made 33 saves in the game, which saw the Reign hold a 34-26 shots-on-goal advantage.

Villalta was sent to the bench in exchange for an extra attacker with 2:30 to play in the third which eventually resulted in an empty-net goal by Sheldon Rempal with 19 seconds left on the clock.

Henderson went 1-for-2 on the power play in the contest while the Reign finished 0-for-3.

The two teams match-up again on Sunday afternoon for Hockey Fights Cancer in Ontario at Toyota Arena beginning at 3 p.m.

Marco Sturm
On if adjustments are needed to the team’s game or not
I don’t know if ‘stick with it’ are the right words for it, I think we still have too many passengers and I think we should’ve been way better today and we weren’t. At the end of the day, special teams was probably the difference but even the 5-on-5 game was probably not our best.

On the play of Villalta
He was pretty solid. He had some really good saves. I think on the two goals he maybe wanted those two back but on the other side he made some big saves too. Goalies have the be the best they can to give us a chance every night. Our best players have to be the best too, because otherwise it’s going to be hard. going. Chromiak too. He still needs time. We need to be patient a little bit. We try to help them get going as soon as possible.

On playing Henderson back-to-back with another game Sunday
Ask me again tomorrow night after the game. We’re all in the same boat. I don’t know if it’s good or bad. Yes it is good today probably, but it all depends on how we react tomorrow. Right now there’s a lot of frustration. We all have to do a better job to come out of this funk. It starts with one period and then you go to the next one and the next one and we just couldn’t do it today. Hopefully we can do it better tomorrow.

On how the coaching staff can help the team through this stretch
I think in general you want to simplify your game a little bit. You want to support each other on and off the ice, and that’s something we still struggle with. We came a little bit better in the third, yes, but overall we just didn’t support each other, we were not on the same page, the five guys on the ice, and before we did. That’s a big difference. Look how we scored, it can’t get any easier and it’s also hard work and a little bit of luck but we breakout really clean and we got rewarded with a goal. Guys have to believe in that and we’ve just got to do it over and over for 60 minutes.