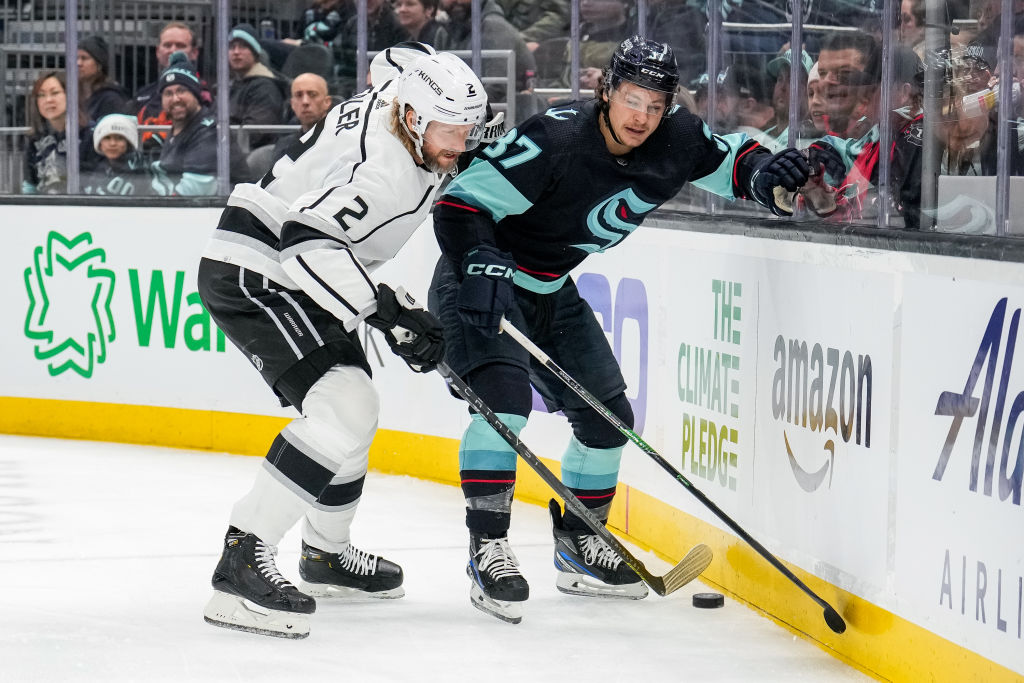 The LA Kings fought back to earn a point on the road but fell in overtime by a 3-2 final against the Seattle Kraken on Saturday evening at Climate Pledge Arena.

Forward Phillip Danault led the way with a multi-point night, while forward Trevor Moore also scored in the defeat. Kings goaltender Cal Petersen made 26 saves between the pipes.

The Kraken took a 1-0 lead through 20 minutes with the lone goal from the first period. Forward Jordan Eberle worked his way to the net off the rush and his backhanded effort was kicked aside by Petersen, but the rebound directed to forward Jared McCann, who fired home from the right-hand circle.

It took nearly the entirety of the second period, but the Kings tied the game at one with just 68 seconds to play in the middle frame. After several plays were made to keep the puck alive in the offensive zone, forward Viktor Arvidsson spun and fed Danault in the slot, where his first effort was stopped, but he waited until the rebound fell below the crossbar to whack it home and tie the game with his sixth goal of the season.

The Kings took their first lead of the night just 35 seconds into the third period with their first shorthanded goal of the season. Quick decisions made by Matt Roy and Danault sent Trevor Moore alone on a breakaway. The California native finished high on the blocker side for his sixth goal of the season and his NHL-leading sixth shorthanded goal over the last two seasons.

Seattle surged back, however, to tie the game at two on the same power play. Forward Daniel Sprong found himself alone in the left-hand circle and he beat Petersen through the five hole to equalize just 18 seconds after Moore’s shorthanded goal. Sprong’s goal was his third of the 2022-23 season.

After the teams played the final 19+ minutes of the third period without a goal, the game progressed to overtime tied at two goals apiece, with both teams likely deserving the point. Forward Jordan Eberle led a 2-on-1 rush on the counterattack, against tired skaters, and buried from the left-hand circle to give the hosts a 3-2 victory.

Alex Edler
On the battle and grind elements shown tonight to get a point, on a night that wasn’t the cleanest
Yeah, it was a battle from start to finish. They’re a very fast team, they come hard, they don’t give you a lot of time or space. I think we played alright, but it was one of those games that just went to overtime and they got extra point.

On reuniting on a defensive pairing with Matt Roy
I just think playing with Royzie is easy. He’s solid, he’s easy to read off and he makes my job easy.

On his involvement on Phil Danault’s goal in the second period
We were in the [offensive zone] for a bit, so you want to try to keep it in there if you can so they can’t change. You get tired playing in your own end, so I just tried to keep the puck in the zone.

On if he senses fatigue coming into the group a bit as of late
I don’t know, maybe, but that’s nothing we think about. Every single team in this league, they go through stretches with a lot of games. Being tired, it’s never an excuse in this league. Whether it’s a back-to-back, or you played a lot of games lately, you have to come out and battle and execute your system. The good teams win, even they play back-to-back or have a lot of games.

Todd McLellan
On getting a point from a game that wasn’t the cleanest
Yeah, it wasn’t the cleanest because the other team sometimes gets in the way, they played really hard. I thought it was a really hard, heavy game for both teams, evenly played. We made the last mistake and they capitalized on it. To come up with a point in a back-to-back game, especially coming from behind, we’ll take that. It was a hard night.

On if he felt the team got what they wanted from adjustments to the forward lines
I think we did. Still, we’re creating chances and we’re not finishing, but we’ve come to expect a lot of goals early in the year, they were going in for us. The number of chances we created last night in Vancouver and tonight, if we keep doing that it will eventually go our way.

On Cal Petersen tonight, and keeping the game 1-0 until the Kings could comeback
I thought both goalies played well. Cal made some tremendous saves, Jones kept them in it when mistakes went against them. Both goalies did what they had to do, that’s why the game went to overtime in a low-scoring, hard-fought match

On if he senses elements of fatigue might be creeping into the Kings game overall
Yes, we’re taking it right now, there are other teams that are 10 days behind us though, they’ll get it at some point and we have to be playing them, so we need to take advantage of it. At the end, we all play 82 games, it’s just how it’s dispersed, when it’s dispersed and where. There will be times where certain teams are tired and other teams are fresh. To get a point in this situation was good for us. I thought we really had to dig in to get that point. We’ll rest tomorrow and then we’ll get ready for another tough week.

Notes –
– Phillip Danault collected his fourth multi-point game of the season with a goal and an assist this evening.
– Trevor Moore scored his seventh goal of the season and his fourth goal in last three games in the third period. Moore’s goal was a shorthanded tally, the eighth of his NHL career. No player in the NHL has scored more SHG’s over the last two seasons’s than Moore (6).
– Viktor Arvidsson (0-1=1) tallied his 11th assist of the year and has collected five points (0-5-5) from his last four games played.
– Matt Roy (0-1=1) registered his ninth point of the season.
– Jacob Moverare made his season debut and led the team in shots on goal with five, as he logged 13:45 in time-on-ice.

*McLellan shared that Sean Durzi, who missed the game with an upper-body injury, is day-to-day. McLellan does not believe the injury is “major”, but he’ll be re-evaluated tomorrow.

The Kings have a full team off day tomorrow, following the travel home from Seattle. The team is scheduled to return to the ice for practice on Monday morning at 11 AM from Toyota Sports Performance Center.