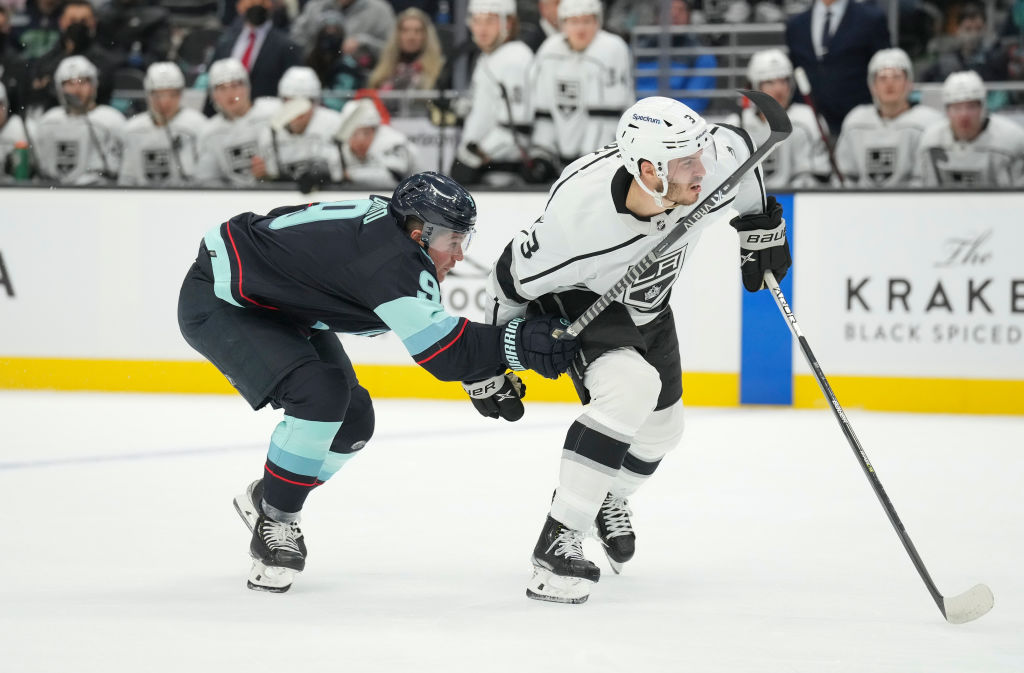 TONIGHT’S MATCHUP: The Kings conclude a four-game roadtrip this evening in Seattle, with the second half of a back-to-back set on the docket.

HEAD-TO-HEAD: Forward Alex Iafallo, who is currently injured, scored his team’s lone goal during the first game versus Seattle this season, an unassisted marker. Forwards Gabe Vilardi (2-2-4) and Adrian Kempe (1-3-4) led the Kings a season ago with four points from three games played versus the Kraken, while forward Phillip Danault had three goals from four head-to-head contests.

KINGS VITALS: The Kings did not hold a morning skate today, considering the back-to-back, so we’ll get tonight’s lineup for sure from warmups tonight.

With the back-to-back games and Jonathan Quick starting last night in Vancouver, consider goaltender Cal Petersen tonight’s likely starter versus Seattle. All-time versus the Kraken, Petersen is 2-1-0, with a .889 save percentage and a 3.01 goals-against average. More on Petersen’s play as of late below.

For reference, here’s how the Kings lined up last night, though there could always be potential changes to the group this evening –

Todd McLellan indicated there could be a potential change tonight, but nothing we’ll know for sure until warmups. Defenseman Jacob Moverare would be the option to check in on the blueline and the Swede tallied one assist from three games played last season against the Kraken. Forward Lias Andersson is the extra option up front and he scored his lone NHL goal of the 2021-22 season against Seattle last April.

KRAKEN VITALS: Seattle is currently on the fifth game of a six-game homestand, returning to action for the first time since a 3-2 victory over the Rangers on Thursday evening.

Former Kings goaltender Martin Jones is the expected starter this evening for the Kraken, in line for what would be his seventh consecutive start. Jones has posted a 20-7-3 record all-time versus the Kings, with a .926 save percentage and a 2.29 goals-against average. Jones earned the victory with 26 saves on 27 shots when these two teams met back in October at Crypto.com Arena.

For reference, here’s how the Kraken lined up last time out against New York, with Andy Eide of NHL.com indicating the same lineup is expected –

Here are the lines/pairings for tonight’s #SEAKraken game against the New York Rangers. #Kraken #NHL pic.twitter.com/BIg0LEaagt

Shots on goal were 10 for opposed to 2 against, while scoring chances were 6-2 in their favor. In terms of “expected goals percentage” if you buy into that metric, they were upwards of 85 percent, allowing almost nothing of danger defensively while creating several chances offensively. The end result, however, was 0-0 in terms of goals for and against.

On one hand, they conceded essentially nothing. Didn’t hurt the team at all and were not among those Todd McLellan talked about when referencing players not playing the way they needed to yesterday. On the other hand, though, that’s your top offensive line by minutes played and you want to see chances become goals.

“Well, if we just look at last night’s game, it’s just finishing,” McLellan said, of what the line needed to do to be more productive. “I can’t say they’ve got to shoot quicker or pick a different spot to score on, they they created a number of chances. It’s got to go in for them and it’s as simple as that. They’ve all done it before, they’re all experienced players now, they should all be fairly confident, so it’s got to happen for them.”

McLellan also touched on how he’s felt Gabe Vilardi has settled into a Top-6 role.

Vilardi got off to a hot start on that line, collecting four points from his first three games and four goals from his first six. Since that time, however, he has gone five straight games without a point. His chances, both individually and on-ice, are slightly down, but most games you walk away recalling a couple of vivid, Grade-A opportunities that he either had himself or facilitated for his linemates. McLellan’s full quote on Vilardi below –

On Gabe Vilardi and how he’s adjusting to a Top-6 Role
I think with Gabe, we’re a quarter of the way into the season, he has played in the league before and this is 20 games of a heavy workload and we’ve played a lot of hockey. I don’t think that he is accustomed to that at this level and he’s learning how to manage with it. Some nights, the polish isn’t quite there as much but he’s still creating, he’s still doing a lot of good things on the ice. He does some forechecking for that line, I feel like he’s brought an element of physicality to his game now that he likely didn’t have before or he didn’t use before, so there are good parts to his game. When it comes to playing in the top six and in every situation other than penalty kill, your engine’s got to adjust a little bit and I think he’s getting used to doing that night after night.

Sargent Petersen
Slowly and steadily, we have seen a calm and composed Cal Petersen in net for the LA Kings over his last four appearances.

Over those last four starts, Petersen has posted a 3-1-0 record, with a .902 save percentage that sits well above his season totals, though still lower than what he’s looking for. His breakdown of goals against profiles better, however.

Of the 11 goals Petersen has conceded over his last four starts, six of them have been power-play goals against, with another coming as the Kings defended a 6-on-5 with an extra attacker on the ice. In that span, Petersen has posted a .952 save percentage when playing at 5-on-5, the third best mark in the NHL amongst goaltenders with at least three games played. Of the four goals he’s allowed at 5-on-5, three have come off of high-danger chances against, per Natural Stat Trick.

Against Edmonton, Todd McLellan described Petersen as “calm” in net. His teammates were solid in front of him, with a season-high 29 blocked shots, but Petersen also delivered himself, with several high-quality saves in an important victory on the road.

“Calm – There was a lot of panic in and around the net and he made some really good, tough saves and then the one the simple ones he was making,” McLellan said of Petersen’s game last time out. “I thought that he managed the game well. There were times where we needed whistles to get rest or changes and he did a real good job of that too.”

Getting continued performances at that level is something the Kings will need as the season progresses. Jonathan Quick has had some big performances in the early stages of the season, but he’ll be 37 in January and the Kings need balance between the pipes. The best stretch the Kings showed a season ago came when Petersen and Quick regularly alternated starts, pushing each other for the net with quality performances, rather than ceding it due to poor ones. It’s the balance the Kings hope to strike, and Petersen’s solid play as of late is a big part of that. That play continued would be a welcomed sign for a team looking for balance.

Ups & Downs
Lastly, a follow-up from McLellan regarding ths ups and downs of last night’s game. McLellan indicated he didn’t like the way the Kupari line played, in particular the third goal the Kings conceded, which came less than a minute after they got on the scoreboard. Quote posted in full below –

“There certainly were takeaways on both sides. Bad is obviously the outcome, but there were some determining factors, I think, to that outcome. We played well in spurts and then there were too many ups and downs from line to line. I thought the Kupari line really struggled last night and didn’t manage things real well. Gave the goal up 40 seconds or 50 seconds after we scored, that was a bit of a backbreaker. Positive side, I thought we generated a lot of chances but the negative part of that was we didn’t finish. You can flip that script around the other way, we didn’t give up much but they did finish, so frustrating night. We’ve got to park it and move on. We’re going to play against a really good, hard, heavy team tonight that’s playing well.”

Kings and Kraken, tonight at 7 PM as the Kings conclude a four-game trip within the Pacific Division!