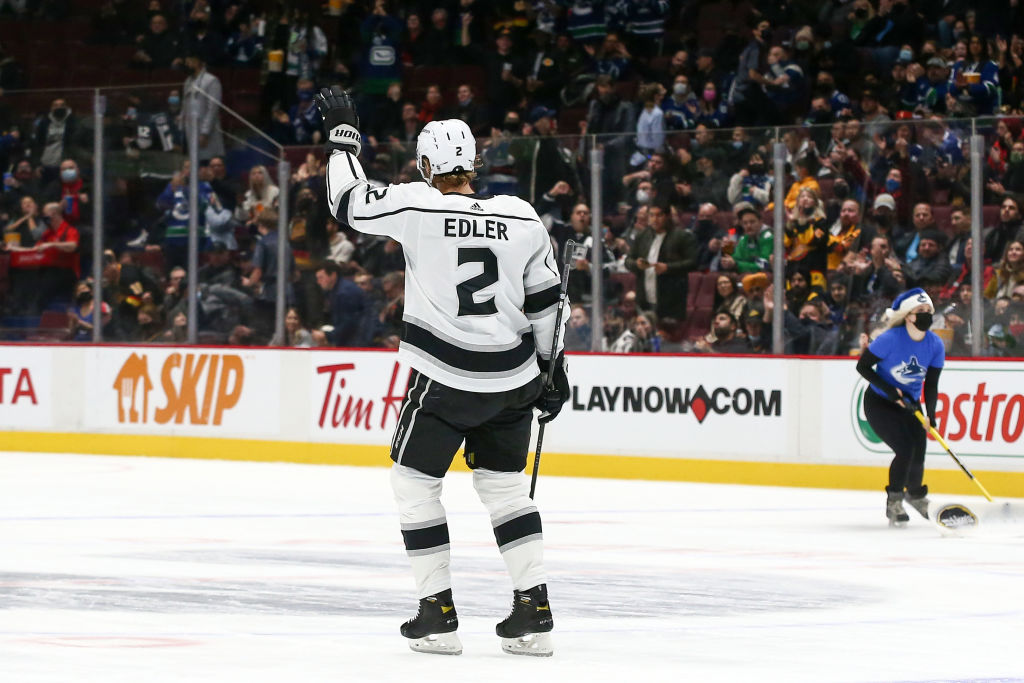 TONIGHT’S MATCHUP: The Kings are in British Columbia this evening to end the Canadian portion of their four-game trip with a matchup against the Canucks.

HEAD-TO-HEAD: The Kings scored just three total goals versus the Canucks last season, with forwards Gabe Vilardi and Adrian Kempe each accounting for one of those three markers. Tonight’s game is the first in Vancouver since an emotional, regular-season finale in April, Dustin Brown’s final regular-season game in the NHL.

KINGS VITALS: The Kings had an off day yesterday in Vancouver and took the ice this morning for a full-team morning skate from Rogers Arena.

This morning’s skate pointed to Jonathan Quick as tonight’s projected starter at Rogers Arena. Quick won his only matchup against Vancouver a season ago and is 19-19-4 all-time versus the Canucks, with a .926 save percentage and a 20.3 goals-against average. Quick’s SV% and GAA against Vancouver are his best against any Western Conference opponent throughout his career.

Listed below is how the Kings aligned during morning skate today. Coming off the win in Edmonton, the alignment looked to be the same –

As noted above, the only change projected based off of this morning’s groupings would be between the pipes. Forward Lias Andersson and defenseman Jacob Moverare were on late for extra work this morning and would be the team’s options should they decide to make a change. As always, it’s a possibility as we move closer to game time.

CANUCKS VITALS: The Canucks have been off since Tuesday, when they completed a five-game Eastern Conference roadtrip in Buffalo.

Goaltender Thatcher Demko was the first netminder off this morning for the hosts, making him tonight’s projected starter for Vancouver. Demko has allowed just two goals from two career games played versus the Kings, as he’s posted a 2-0-0 record with a .971 save percentage, a 0.96 goals-against average and one shutout.

Below is how the Canucks lined up this morning, per Chris Faber, with Thomas Drance of The Athletic reporting that Burroughs, Rathbone and Podkolzin were on late for extra work –

Former Kings defenseman Luke Schenn is expected to skate on the first pairing for the Canucks tonight. Canucks center Bo Horvat is second in the NHL with 14 goals this season, one shy of the league lead. Defenseman Quinn Hughes is tied for seventh in the league amongst blueliners with 14 assists.

Notes –
“Kings Hockey”
Phil Danault said it after a win over Chicago. Cal Petersen said it after the win over Edmonton. We’ve heard it here and there from others as well in varying forms, but the theme of “LA Kings Hockey” is starting to make its way around the locker room as of late.

The best part about it is that the Kings are not only saying it, but they’re playing it as well. As the team searches for consistency and the level and style of play that comes from it, that’s a really good thing.

“I think it’s a really good thing that they are talking that way after certain types of games because that’s how we’re built and that’s how we want to play, or need to play,” Todd McLellan said this morning. “Sometimes it gets away on you, but that consistency we’ve been looking for all year, if they’re buying it and believing in it, it’s certainly a lot more powerful than when it comes from us.”

We’ve been in search of what exactly Kings hockey is in the early stages of the season and we’re starting to see it here over the lsat stretch of games.

The Edmonton game, in many ways, was Kings hockey at its finest. The Kings were difficult to play against and frustrated one of the league’s most dynamic teams, holding the Oilers to one goal with neither Connor McDavid nor Leon Draisaitl collecting a point. A big part of that comes down to identity and structure.

“We know what our game is and I that’s really important for a group to know their identity and to find it early and build on it,” defenseman Sean Durzi said this morning. “It’s really important, so to have an idea and to know what kind of hockey we want to play and to build on that now is important, and I think that’s something that we’re going to do.”

The key now is continuity.

Evaluating individual performances is one thing, but success is about doing it over an extended stretch. That’s what the Kings are now hoping to achieve.

“The game is full of mistakes, it’s full of ups and downs, the energy level changes,” McLellan added. “We try and get the best out of each other, coching staff, players and staff on a nightly basis, sometimes it works and some nights it doesnt. Over time, 82 games, if you do it the proper way, you’re built properly and you have enough talent, you should get some results out of it, but if you live and die on 60-minute production, night after night, you’ll be going crazy.”

Jenny From The Block(ed Shots)
“It’s a big part of of the game today. You can’t take time and space away all the time and players are going to get looks and that’s when you have to get in front of that puck. We did a tremendous job early in the game and I think that led to our identity in Edmonton. We were committed, we weren’t shoddy as we were in Calgary. It can be contagious and it should be.”

The above quote was from Todd McLellan but the message from around the locker room surrounding the Edmonton game was a lot of pride when it came to the team’s willingness and success with blocking shots.

The Kings had 16 shot blocks in the first period from 11 different players and finished with a grand total of 29 for the game, the third most in franchise history per LA Kings PR. Blocked shots are an interesting stat, because it’s essential to team success defensively, but a large total also means that you don’t have the puck in those scenarios.

The Kings were out-attempted versus the Oilers 61-47, but led 32-23 in shots on goal. When focusing in on scoring chances and high-danger chances, which factors in all attempts, the game was much closer to even and that indicates that overall chances were relatively close, even if slightly skewed towards the Oilers, but the shot blocks the Kings produced were huge in limiting the shots that Cal Petersen had to face.

A lot of commentary on that fact of the game from those executing.

Sean Durzi – I think you saw the sacrifice in the first period and throughout the game, guys blocked shots, guys stepped in front of slapshots, looking at it from 20 feet away. For hockey players, it looks easy, but that’s pretty hard shot coming in and they hurt but to see the sacrifice and see the guys do that, everyone from first line to fourth line and all six D. Everyone was talking, getting in front of shots, sticking up for each other all that is special. You can see that, when you have that with a team, guys tend to play for each other and it’s important.

Trevor Moore – That had to be the most blocked shots for us of the year, if not the last couple of years. I think that we had a really good team effort that way and helped Cal out a lot and he made some great saves for us too. It was great as a team.

Viktor Arvidsson – Yeah I feel like that’s always there in our game, but it was extra [against Edmonton]. It started with JAD blocking two on his first shift, then it was Kopi and everyone laid out and helped out.

Naturally, the team won’t contend for a franchise record in the category each and every time out, and in some ways we should hope they won’t, but it was certainly good to see that in the team’s game against the Oilers. With another test tonight here in Vancouver, whether the total number is high or perhaps just the timeliness is high, the Kings will look for more of the same mentality wise.

Edler Talks HOF Teammates
Upon Alex Edler’s return to Vancouver, surrounding the Hall of Fame induction ceremony earlier this week, it was naturally a big topic of conversation around the Canucks organization.

Edler has been back before, with the Kings playing here twice a season ago, but both games were on the second half of back-to-backs, without a day to spend here. Elder noted that he enjoyed his day off here yesterday, though today it’s back to business. Having spent 15 years as a Canuck, Edler was a long-time teammate of both Daniel and Henrik Sedin, as well as goaltender Roberto Luongo, all of whom were enshrined into the Hockey Hall of Fame on Tuesday. He spoke on his honored teammates before tonight’s game –

Edler on Sedins
What an honor. Well deserved, I can’t think of two better guys both on and off the ice. They helped me a ton in my career and they took me under their wings from day one. Just to be around them, on a day-to-day basis and see what they do, see how professional they are, how much they competed, how they worked, I think it helped everyone that played with them.

Edler on Luongo
Yeah, same thing there, I don’t know if I’ve seen a harder competitor when he was on the ice, whether it was practice or games, you know, he was a true professional. Being around those people and having those players as teammates, it rubbed off on everyone. Also very well deserved.

Kings and Canucks, tonight at 7 PM as the Kings finally return to the Pacific timezone. No more time conversions for this guy! Talk soon.