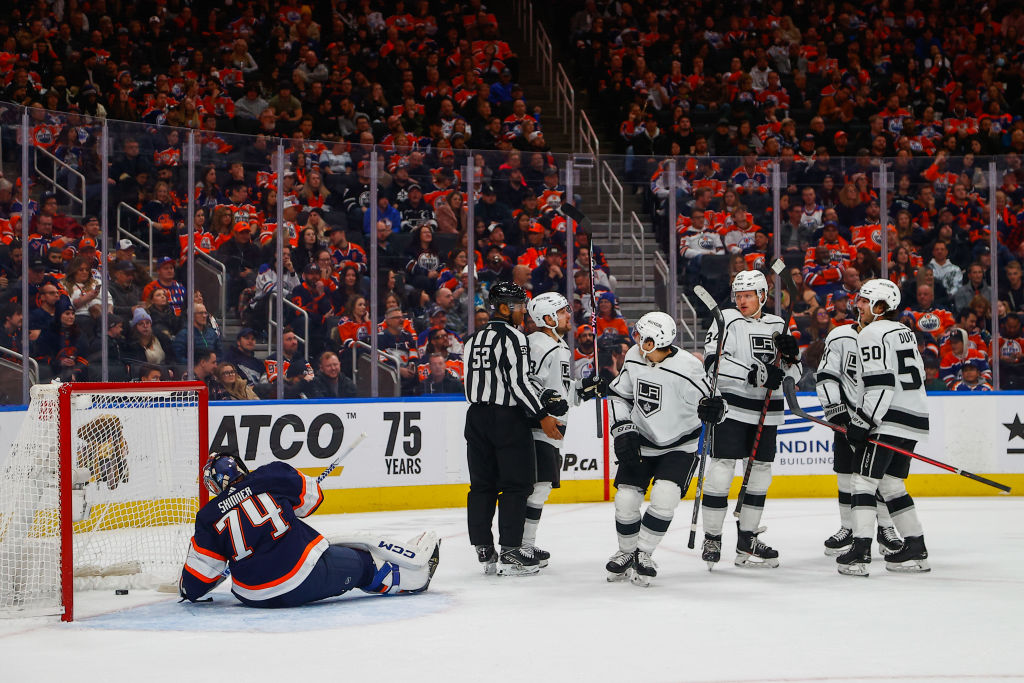 The LA Kings bounced back in a big way with a convincing, 3-1 victory over the Edmonton Oilers on Wednesday evening at Rogers Place.

Forward Trevor Moore had a hat trick tonight, the first of his NHL career, as he scored all of the team’s goals on the evening. Linemate Viktor Arvidsson assisted on all three Moore goals as he reached the 300-point mark for his NHL career.

The Kings opened the scoring with the lone goal of the first period to take a 1-0 lead through 20 minutes. Forward Phillip Danault won a puck battle below the dots and made a one-handed pass to Moore at the top of the circle, where he one-timed the puck past Edmonton netminder Stuart Skinner for his third goal of the season.

Midway through the second period, Edmonton tied the game off a strong forecheck and a Kings turnover, as forward Zach Hyman slotted home on the backhand to equalize the score midway through the second period. After a failed Kings clearance was intercepted by defenseman Ryan Murray, one pass later Hyman went top shelf from a Grade-A area to tie the game with his eighth goal of the season.

The visitors fought back, however, to take a 2-1 lead into the second intermission. Just seconds after a power play had expired, the Kings continued the sequence, with forward Viktor Arvidsson feeding Moore through the slot and Moore buried at the back post for his second goal of the night. Arvidsson tallied his 300th career NHL point with the assist on the play.

After a third period that featured opportunites but no goals, Moore iced the game inside a minute to play with an empty-net goal from the neutral zone, completing the hat trick.

Viktor Arvidsson
On seeing Trevor Moore get his first career hat trick
It was awesome. It’s so fun for him and I think we played a solid game all the way through. I’m happy for him.

On if he feels his line thrives in that type of game
Yeah, it was competitive, going up against two of the best players in the world is fun and it’s a challenge. I think we embraced it really well, we worked hard and we got rewarded.

On the mentality of blocking shots tonight
Yeah, I feel like that’s always there but today it was extra and it was really good. It all started with JAD, who blocked two on his first shift, and then Kopi and everyone just laid out and helped Cal in net.

Cal Petersen
On the blocked shots and performance of the team tonight
To put it frankly, we should just show that game every single training camp, because that’s basically Kings hockey in a nutshell. I don’t know if we can do it any better than that. The amount of sacrifice the guys did, from the drop of the puck, Durz saving one right there. I wouldn’t be surprised if every guy had a blocked shot. That was as impressed as I’ve been on that side of things as long as I’ve been as a King.

On his own game tonight
Good. Just reciprocated what the guys were doing in front of me, but just trying to take it one game at a time. You have to win games in different ways on different nights in this league so we’re just trying to find the winning formula each night.

Todd McLellan
On how he felt the team responded overall today after the loss in Calgary
Really well. We went from shoddy, I think was the word I used in Calgary, to committed. It looked different, it felt different, we played way closer to our identity, likely the way we have to play to beat teams like this and a lot of teams in the league. Proud of the group.

On the play of the Danault line and if they’re built for a game like this
Yeah, I think you have to give them a lot of credit for the little things they did without the puck. When they’re doing that, like blocked shots right off the bat, when they’re doing that, everybody seems to do it and it’s contagious. Leaders lead, everybody else follows. I thought Kopi and his line did a tremendous job, they had heavy minutes and it’s nice to have that 1-2 punch to go against a team like that.

On Trevor Moore’s play and his first career hat trick
We’re happy for him. He works his butt off night after night, does those things that I talked about earlier, those defensive things that our key to winning some nights and he found a way to put the puck in the net. He’s been there all year for us offensively, it just hasn’t gone in a lot for him. I haven’t looked lately but I know he was leading us in shots on goal, that means he’s around the net a lot. Finally they’re across the goal line.

On Cal Petersen’s performance tonight
Calm. There was a lot of panic in and around the net and he made some really good, tough saves and then the one the simple ones he was making. I thought that he managed the game well. There were times where we needed whistles to get rest or changes and he did a real good job of that too.

Notes –
– Trevor Moore recorded his first career hat trick and the third multi-goal game of his career. Moore is the sixth California-born skater in league history to record a hat trick and it marked the first hat trick by an LA King skater since Viktor Arvidsson on March 4, 2022 vs. Columbus.
– Moore also became the first California-born player to have a hat trick for a California team.
– Viktor Arvidsson assisted on all three of Moore’s goals for his third career three-assist game. Arvidsson surpassed the 300-point plateau for his NHL career. Arvidsson became the ninth member of the 2014 NHL Draft class to reach such mark, joining teammate Kevin Fiala, who achieved the feat himself in Calgary on Monday.
– Cal Petersen stopped 21-of-22 shots for his fifth win of the season, in his 98th career game played.
– The Kings had a season-high 29 blocked shots, marking the third time in franchise history the Kings have blocked 29 or more shots in a game (31 blocks, Feb. 19, 2018 vs. Chicago; 29 blocks, Dec. 22, 2018 vs. San Jose).

The Kings will have an off day tomorrow in Vancouver. The team is scheduled to return to the ice for morning skate on Friday from Rogers Arena.