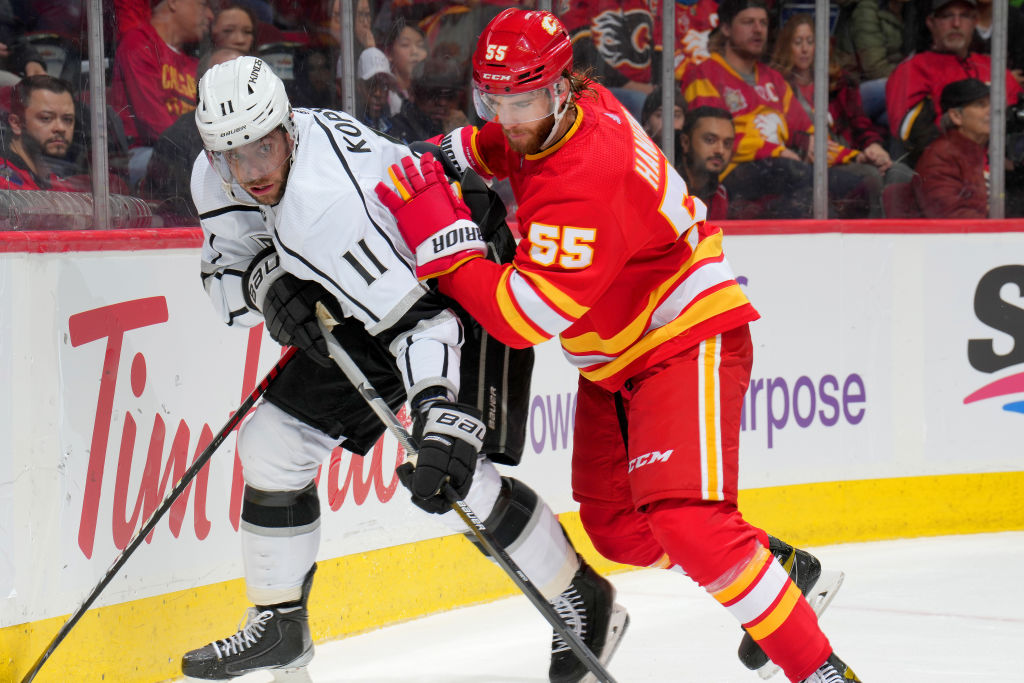 The LA Kings began a four-game roadtrip with a 6-5 defeat in Calgary on Monday evening at the Scotiabank Saddledome.

The Kings got two goals from forward Arthur Kaliyev in the loss, while defenseman Drew Doughty had two assists and forwards Kevin Fiala, Adrian Kempe and Anze Kopitar also scored.

The Flames opened the scoring less than four minutes into the game through forward Jonathan Huberdeau, who collected his second as a member of the Calgary organization. Off of an extended shift along the boards in the offensive zone, Huberdeau worked his way into the middle of the ice, took a centering feed from defenseman Rasmus Andersson and buried the game-opening goal.

Kaliyev scored twice in a span of 1:19 to flip the script early and put the Kings ahead 2-1. First, with the visitors on the man advantage, forward Viktor Arvidsson found Kaliyev on a low-to-high play, with the winger burying first time to knot the score at one. Just over a minute later, Kaliyev scored again, as he collected a rebound at the back post, spun and fired past Calgary netminder Jakob Markstrom for his second of the evening.

Calgary scored three times in the latter stages of the opening period to take a 4-2 lead into the first intermission. The first goal came off a defensive-zone turnover and Nazem Kadri’s resulting shot hit Milan Lucic and deflected to Andrew Mangiapane, who buried at the back post to tie the game at two. Less than a minute later, forward Brett Ritchie finished a 2-on-1 to push the Flames ahead, before former King Tyler Toffoli finished the scoring for the period with another 2-on-1 goal, this time off the rush, to put Calgary ahead by two.

The hosts pushed their lead to three goals with a power-play tally early in the second period, as fofrward Elias Lindholm netted his sixth goal of the season. Toffoli nearly put home a cross-crease pass, but Kings netminder Jonathan Quick got across for the save, before Lindholm put home the rebound to make it 5-2.

The Kings pulled one back with less than six minutes to play in the second period. Fiala led the rush into the zone and wound up finishing the play at the back post, as he collected an Alex Edler rebound off the endboards and slotted home with quick hands for his sixth goal of the season.

The two-goal differential lasted just over two minutes, however, as a tough bounce led to Calgary’s sixth of the evening. Sean Durzi’s clearing attempt up the boards hit an on-ice official and kicked back the other way, setting up a 2-on-1 rush, which Adam Ruzicka buried to restore the three-goal advantage for the Flames.

The visitors moved back to within two goals midway through the third period as they converted with the teams skating 4-on-4. With a bit of motion in front of Markstrom, forward Anze Kopitar fired a wrist shot off the post and in from the right-hand circle for his third goal of the season, pulling the Kings to within 6-4.

With less than two minutes to play, the Kings moved to a goal of tying the game. Skating 5-on-4, with coincidental penalties taking off a player for each side and the goaltender pulled for the extra attacker, the Kings got a goal from Kempe, who snapped his scoring skid with a one-timer from the right-hand circle off a feed from Doughty.

The Kings were inches from forcing overtime with 22 seconds left on the clock, as Gabe Vilardi found Kopitar in a dangerous area in front, but Markstrom came up with his best save of the evening to seal the one-goal victory.

Phillip Danault
On the disappointment defensively in tonight’s game
Yeah, I think we played one of our worst games defensively, we gave up too many rushes. We did that to ourselves and lost the game in the first period. We weren’t sharp enough mentally.

On a specific area of the game he felt was lacking defensively
It was mistakes that they capitalized on. They’re good team and that’s what they do all the time, they capitalize on mistakes like that to try and frustrate other teams just like we do.

On the character shown to fight back the way they did in the third
A lot of character, obviously we wanted to get better and get back to our game as fast as possible, so we didn’t weigh too much on the next game. Obviously it was really close, but a lot of character from our team, big time.

On what he feels needs to change heading into Edmonton on Wednesday
Our start has got to be better, defensively we have to be better, move the puck quicker, we have to get open. All-around game, I think. We put this game behind us and we’ll keep that third period in mind, we were better than they were [in that period].

Todd McLellan
On the takeaways from tonight’s defeat
Well, we played some pretty shoddy hockey today and despite getting the lead, we weren’t real sharp, it showed up in a lot of different areas. We had guys miss line changes, passes through the neutral zone, we had an icing call with two seconds left, missed faceoff coverages. To me, I think the physical part of the game was potentially there early, but the mental part didn’t exist at all. Then you get a little desperate, it starts going away but it’s too little too late. You can pick any one of the probably 20 moments during the game and eliminate it, it may give us a better chance but we still weren’t good.

On the disappointment in odd-man goals against, after fairing well in that area at home
Yepp, that’s a simple answer. Can’t even really elaborate there, yes.

On what the message was during the timeout in the second period
Just get back to work.

On the resilience shown to be within a terrific save late in the game of overtime, despite the “shoddy” performance
I’m going answer the obvious, it’s good, we didn’t roll over and we didn’t quit, but the fact that we were in that situation was pretty unique. We were a shot away from at least getting a point on that night, the goaltender made a real good save, but again, I don’t think we should lose sight of how this game evolved. Just because we fought back and made it 6-5, there are a lot of things that we have to fix.

Notes –
– Arthur Kaliyev tallied his fifth and sixth goals of the season, including his team-leading fourth power-play goal. Tonight was also the second multi-goal game of his career (3.2.22 at Dallas).
– With his first goal, Kaliyev eclipsed the 20-goal mark in his career. Per NHL PR, Kaliyev (98 GP) is the sixth Kings player in the past 25 years to score his first 20 NHL goals in less than 100 games (Anze Kopitar, 72 GP; Michael Cammalleri, 77 GP; Tyler Toffoli, 83 GP; Gabriel Vilardi, 92 GP; Alex Frolov, 94 GP).
– Kevin Fiala (1-1-2) scored his sixth goal and registered his fifth multi-point game of the season to surpass the 300-point plateau for his NHL career. Fiala (130-171-301) became the fifth Swiss-born skater in league history to record 300 career NHL points and the eighth member of the 2014 NHL Draft class to reach the mark.
– Drew Doughty (0-2-2) recorded his first multi-point game of the season and 108th his career, sitting three multi-point games shy of Rob Blake (111) for most by a defenseman in franchise history.
– Anze Kopitar (third of the season) and Adrian Kempe (seventh of the season) each snapped a goalless drought with third-period tallies. Kopitar snapped a six-game run, while Kempe snapped a seven-game run.
– Kempe moved to within three goals of 100 for his career, while forward Viktor Arvidsson moved to within two points of 300 with an assist in the first period.
– The Kings conceded five times tonight for the fifth time this season, falling to 1-4-0 in those situations. The Kings are 3-7-0 when allowing four or more goals in a game this season.

The Kings are scheduled to practice tomorrow afternoon in Edmonton at noon at the Rogers Place practice rink.