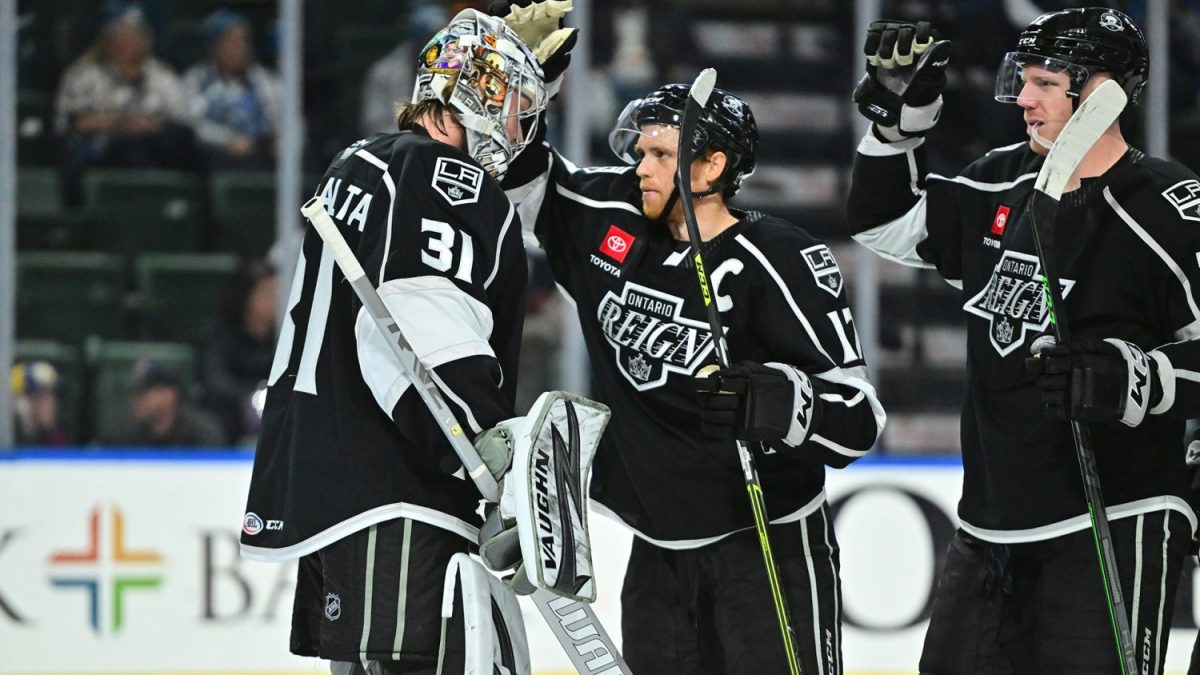 Matt Villalta stopped all 31 shots he faced to record his second-career AHL shutout in a 2-0 blanking of the Colorado Eagles (3-5-0) by the Ontario Reign (7-1-0) on Thursday night at the Budweiser Events Center.

Both Ontario goals were scored by Lias Andersson in the second period, each with an assist from former Eagles forward and current Reign captain TJ Tynan. Ontario has now won six straight games and continues to lead the Pacific Division with 14 points in the standings.

More from head coach Marco Sturm, Villalta and Andersson below.

After a scoreless first period, the Eagles came out with energy to begin the second and put five shots on goal in the opening five minutes of the frame. But Colorado was unable to finish any of those chances that included a look on the power play during a penalty to Samuel Helenius.

Ontario pushed back after the penalty kill was complete and eventually took a 1-0 lead on Andersson’s first goal of the game at 10:46. An initial shot by Jordan Spence ricocheted off the back boards and found Andersson on the back door, who slammed it into the goal. Tynan was also credited with a second assist on the play.

Then in the final minute of the frame, Andersson blasted a one-timer past goaltender Jonas Johansson, adding to the lead with his third goal of the season. The play was started by Tynan, who controlled the puck behind the net and then fed it to Tobie Bisson on the point. Bisson stepped around a check and feathered a perfect pass on the tape of Andersson, who did the rest to make it 2-0 Reign with just 11 seconds left on the clock.

The Reign defense continued to stymie the Eagles in the final period, led by Villalta who stopped 10 shots in the final 20 minutes. Ontario also had to kill a penalty to Austin Wagner for tripping with 7:15 to play and successfully discarded the man-advantage to finish a perfect 4-for-4 on the kill in the game.

Johansson turned aside 19 Reign shots in a losing effort for Colorado, who outshot Ontario 31-21 in the contest.

The two teams will do battle once again to complete the two-game series on Saturday night at the Budweiser Events Center beginning at 6:05 p.m. PT.

Marco Sturm
On how his team played in a tough environment in Colorado
It is a tough building. They have not just good fans, they also have a good team. They work extremely hard. They check really well and it’s those little details and like I told the guys after the first, special teams were probably going to make the difference and that’s how it was. We had to score on the power play to get the lead but I think it was overall a good solid team effort. We had great goaltending today, and our D came up big too.

On the team’s success during the second period
It’s not on purpose. The only thing we talked about is we wanted to have better starts. I think today we had a better start, but these guys are good hockey players and it seems like after the first period, they can crank it up again. And then in the third we’ve been pretty solid all year long. We stayed really calm and like today, they was no panic and our game was pretty clean. And it was nice to see but, I don’t think we do it on purpose but we’ll take those second periods.

On this team’s penalty kill having success over the last few games
Yeah we had to change a few little things on the PK. I think we the coaches, we were not happy and since two-three games now it’s been much better. We need them. In this league, I’ve learned there’s going to be a lot of penalties both ways and we’ve just got to make sure we’re going to win those special teams and PK was good and PP got us a goal so that’s exactly what we want.

On the luxury of having two reliable goaltenders
Oh, it’s really nice. And you could tell the guys too, there’s no panic, because we know we have a guy in net, doesn’t matter who is in which night, they’re gonna give us a chance every night to win a hockey game. That’s what we want and I don’t care which league you’re in, we have solid goaltending and if those guys give you a chance to win every night, I think automatically your team is going to do really well as well.

On what it was like returning to Colorado where things didn’t go his way in the playoffs
Yeah, I think coming in tonight obviously you have that in the back of your head and to be honest, it left a sour taste in my mouth all summer and it was just something that you never want to happen again after getting lit up like that, especially in game one of playoffs here. I think today I just wanted to go in there, have fun and just believe in myself and believe in my game and trust all the work that I put into it so far. I think just be able to get a result like that is a nice confidence boost and also the boys did a great job, especially on the PK in there at the end of the game just getting pucks out so that helped a lot.

On if the win lifts a weight off his shoulders at all
I think so. I think for guys that were here last year for sure. Everyone that played here we all remember what it’s like and just to move on and get a good game in this barn, it’s a good confidence builder for us even though it’s early in the season as well. I think it’s something good to build off of and I think obviously we have a few things we want to tidy up for Saturday, but nonetheless it’s a great step in the right direction for us.

On sealing off second chance rebounds in the crease
Yeah, they’re a big strong team and they like getting pucks to the net so it’s pretty important that you seal the ice, take that first half away and our D will have our backside so you know just being strong on our posts, trying to keep the puck on first half of the net I think that’s huge. And then also when it did get in front of the net, our D and some of our forwards did a great job of boxing guys out and let me see it.

On if he started to think about the shutout at all as the game went on
Yeah I’m gonna be honest with you, it kind of came across my mind at like the five minute mark in a second. I was like, ‘No, I’ve been here before, I’m not thinking about this. Worry about the next shot.’ And then about the nine minute mark left in the third period, same thing and I was like ‘Matt, just focus, get her done.’ And then time starts ticking down, the last few minutes, you start to get a little bit excited, but you just got to try and keep yourself at an even level and just nice to hear that final buzzer and get the result with all the boys.