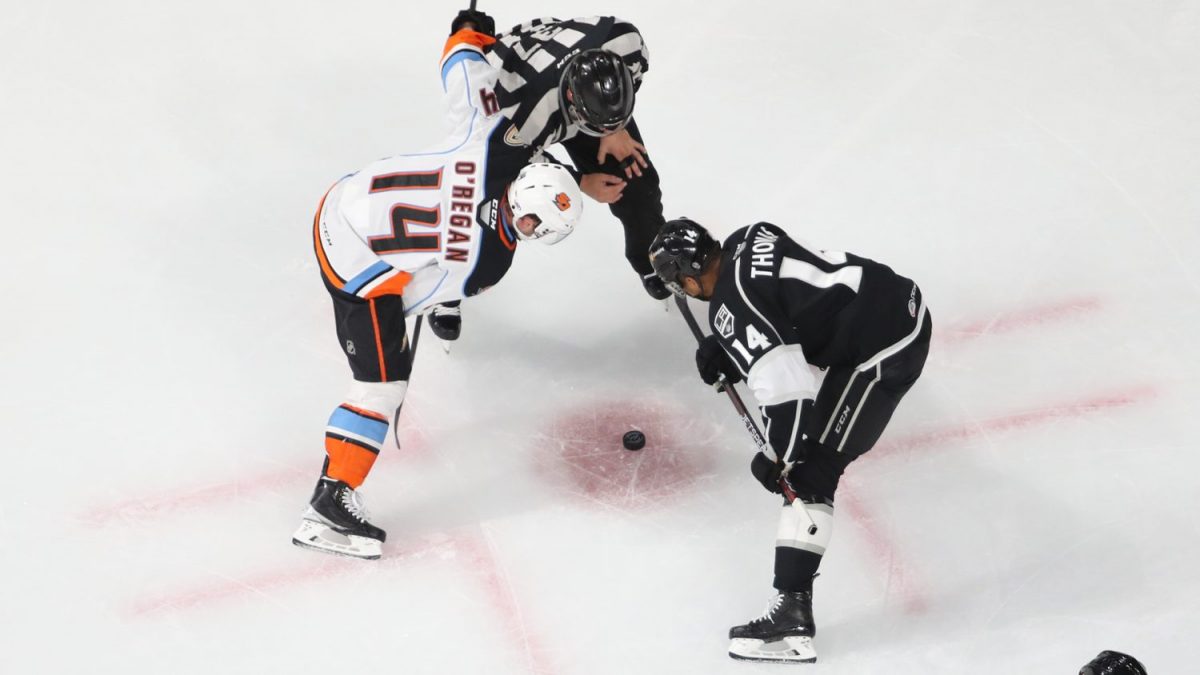 TONIGHT’S MATCHUP: For the first time this season, the Ontario Reign battle their SoCal rival, the San Diego Gulls. Friday night’s matchup also represents the Reign’s first scheduled game outside of the Inland Empire. A year ago, Ontario feasted on the Gulls, posting a 9-3-0 record in 12 contests during the regular season before securing a sweep in the opening round of the postseason. The Reign finished second in the Pacific Division with 91 points while San Diego secured the seventh and final playoff spot in the table with 63 points.

WHAT TO WATCH FOR: Ontario opened its season by posting two wins from a three-game home week with defeats of Abbotsford and Henderson along with a tight 3-2 loss to Bakersfield. After leading the league’s offensive rankings a year ago with 3.81 goals per game, the Reign are near the top again to begin the 2022-23 year with an average of five goals per contest. San Diego is one of the only teams above Ontario after scoring 11 goals in two games against Grand Rapids last weekend. It could be a high-scoring home-and-home weekend between the two clubs.

LAST TIME OUT: The Ontario Reign erased a first period deficit with two goals in the second and tacked on insurance in the third to defeat the Henderson Silver Knights by a final score of 5-3 at Toyota Arena on Tuesday night. Five different scorers did the damage for Ontario, including forwards Rasmus Kupari (1-2=3) and Tyler Madden (1-1=2), who each had multi-point efforts. Goaltender Matt Villalta posted a win in his first start of the season, turning out 27 shots in the victory. Ontario also got goals from forwards Akil Thomas, Alan Quine and Nate Thompson, while defender Tobie Bisson recorded his first Reign point with a second period assist.

YOU CAN’T STOP THE CAPTAIN: Nothing has changed to start the season for new Reign captain TJ Tynan. Through the first week of the year, he’s leading the team with seven points after posting a goal and three assists on Opening Night, adding a pair of helpers on Sunday and picking up his sixth assist in Tuesday’s win. Last Friday the Orland Park, Ill. native began the new year by assisting on a power play goal by Samuel Fagemo in the first before adding a helper on Lias Andersson’s second period strike. Then six minutes later, Tynan took matters into his own hands and stole the puck away from a Canucks skater before wristing home his first tally of the year. Finally, he added the first assist on Tobias Bjornfot’s highlight-reel goal late in the second. It was the sixth time in Tynan’s career that he earned four points in a game. The reigning back-to-back MVP picked up assists on both of Fagemo’s goals Sunday and a helper on Rasmus Kupari’s power play goal Tuesday to secure the overall AHL scoring lead.

SCOUTING THE GULLS: San Diego turned over a new page during the offseason, bringing in longtime AHL head coach Roy Sommer, the winningest bench boss in league history. To begin the new campaign, the Gulls ventured to Grand Rapids and split a pair of opening weekend games with the Griffins, winning last Friday by a 6-2 margin before falling 8-5 the following night. Defenseman Nikolas Brouillard, who finished third on the team in scoring a year ago with 39 points, has returned and is leading the group with five points from the their first two games on two goals and three assists. Also back are standout forwards Hunter Drew, Brayden Tracey and Danny O’Regan. Former LA Kings and Reign defender Austin Strand has flipped to the other side of the SoCal rivalry, joining the Anaheim organization during free agency and securing an assist in his first two games with the Gulls. Despite many changes this year for San Diego, the netminders have remained the same, with Lukas Dostal and Olle Eriksson Ek both back for another campaign. During 2021-22 Dostal led the way, appearing in a team-high 40 games and posting a 2.60 goals-against average along with a 0.916 save percentage.

KUPARI COMES THROUGH: Reign forward Rasmus Kupari broke out on Tuesday, picking up three points in Ontario’s victory with a game-tying second period power play goal and two first assists on key goals in the third period. His performance in the team’s second win secured him first star honors at the conclusion of the game. It was also Kupari’s first-career AHL three-point night, having previously earned two points five times, but never reaching three in any of his previous 76 games with the Reign. A year ago, the Finland native was primarily with the LA Kings, appearing in 57 NHL games where he recorded 13 points (5-8=13), while also playing in 15 contests with Ontario (5-3=8).

MADDEN, IT’S IN THE GAME: Forward Tyler Madden produced his first multi-point effort of the season in Tuesday’s win, scoring a goal and an assist in the 5-3 victory. The third-year forward netted the opening goal of the game on a rush while shorthanded, wristing a puck up high and into the net to give Ontario an early lead. The tally was Madden’s 16th pro goal and his first since changing his jersey to No. 10 this season. He also added a first assist on forward Akil Thomas’ late second period strike, dropping the puck back to his center during a 3-on-2 rush coming into the Henderson zone. It was the eighth time during Madden’s 64-game tenure with the Reign that he posted two points.