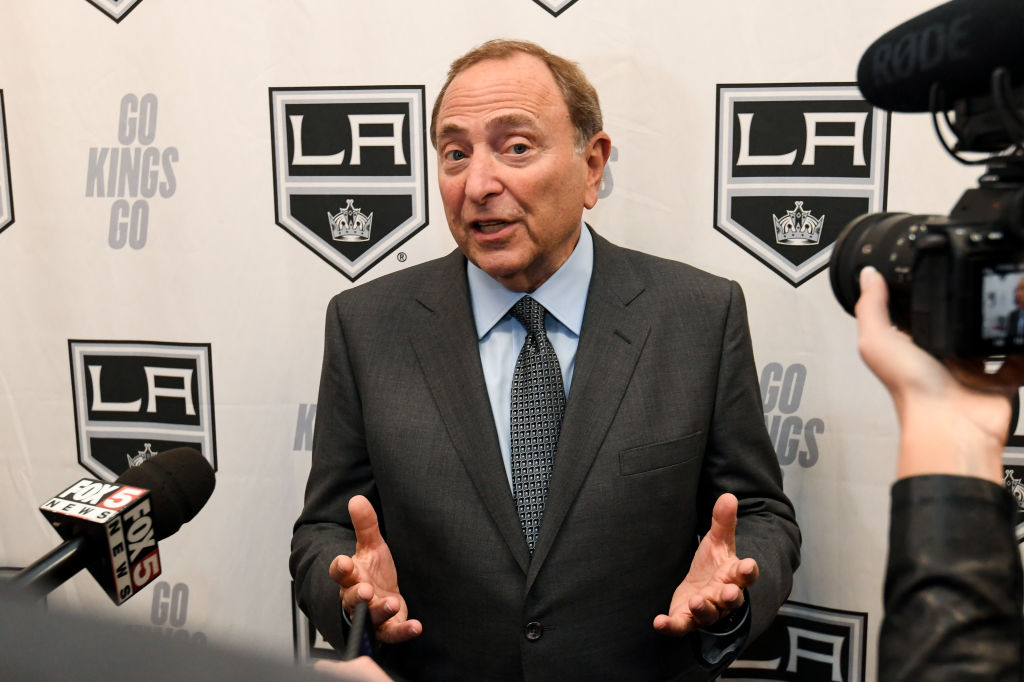 Not the ideal start, eh? A challenging final minute last night that separated at least one point in the standings, and a chance at two, from the zero points the Kings took home. Self-inflicted damage was not a staple of last season’s team, but the Kings had several moments last night when they hurt themselves and that translated into goals against.

More to come on the NHL club later in the day, after we see how today’s practice goes down.

A few other notes for this morning –

Bettman Attends Opening Night
NHL Commissioner Gary Bettman was among those in attendance on Opening Night in Los Angeles.

Bettman addressed a wide array of issues, though few truly pertained to the Kings. Bettman noted that he had no updates regarding the future of Outdoor Games, while preparations are ongoing for a potential World Cup of Hockey, noting that a best-on-best international competition is something that is very important to players. Bettman noted that there is interest from markets on potential expansion, but there are no plans to do so at this time. Additionally, Bettman confirmed that investigations are currently ongoing as it pertains to larger issues such as the situation with Hockey Canada.

Bettman on the atmosphere and experience at Crypto.com Arena
I always love coming to this building. I understand that over the summer they did some renovations on the building and it’s great, it shows the commitment to the community and to the franchise. It’s a fun place to watch a game, the building tonight is great and that’s with the Dodgers playing on the other side of town.

On a potential World Cup of Hockey
We’re still working on it. It’s complicated, we do it jointly with the Players Association, there are a lot of moving parts and we’ve got to get the parts to stop moving so we can piece it together. I’m hopeful and I’m optimistic, I know it’s important to the players, having an international best-on-best competition. When you look at the composition of our player pool, it makes for a great tournament.

On potential salary cap increases in the future
The cap basically only goes up by a million per year until the escrow is paid off, and people tend to forget that the escrow got very large during COVID, because even when the revenues were down, we paid in accordance with the contracts. We’re getting close. Another couple of years max and we should have it repaid and then it will go back up.

Reign Roster Moves
The Ontario Reign announced a pair of transactions yesterday. Forward Nate Thompson, who was in training camp with the Kings on a PTO, has signed a PTO with Ontario. Additionally, the Kings have reassigned goaltender David Hrenak from Ontario to the ECHL’s Greenville Swamp Rabbits.

On Thompson, the veteran skated in 33 NHL games last season with the Philadelphia Flyers, earning a goal and two assists. In his 17-year professional career, Thompson has appeared in 844 NHL games and 221 AHL games, including 79 games played with the Kings during the 2017-18 and 2018-19 seasons. Thompson’s career has also included time with the New York Islanders, Tampa Bay Lightning, Anaheim Ducks, Ottawa Senators and Montreal Canadians.

An AHL PTO offers both player and team a ton of flexibility, as it’s essentially cancellable by either side at any time. From the Reign’s point of view, adding a strong veteran presence to the group is a huge positive, not to mention when it’s a player with more than 1,000 professional games of experience. Thompson has a desire to play and should be a positive influence on the group of younger players in Ontario. It also offers him the flexibility to potentially sign an NHL contract down the road with any of the 32 teams in the league, should that opportunity arise.

On Hrenak, this is a move that was expected to come assuming full health at the goaltending position. The 24-year-old rookie is on a one-year, entry-level contract and needs to get game action during his first professional season. With Jonathan Quick and Cal Petersen entrenched at the NHL level, and the duo of Pheonix Copley and Matt Villalta at the AHL level, the ECHL provides an opportunity for Hrenak to play regularly. The Kings signed a formal, ECHL agreement with Greenville over the summer, with one of the perks of that arrangement being playing time for at least one goaltender. The Swamp Rabbits open their season on Saturday, October 22, with two games on opening weekend.

Greenville Head Coach Andrew Lord on goaltenders getting ECHL minutes
Yeah, it’s critical. I mean, I think if you asked any of your six goalies, they would probably say six goalies is too many, but in actuality, it’s not that many bodies when you’re when you’re thinking about the rest of the lineup, there’s way more in other positions, obviously, there’s more need for it. Still, you’re trying to try to find some studs out of that low number and you need to develop. As Glen Murray said in our press conference, the best way to develop is to play and that’s couldn’t be more true than the goalie position. We play 72 games, we play a ton of three-in-threes, so it’s a perfect opportunity to go with a two goalie setup and try to manage the workload, load management wise, so great opportunity for whoever we get.They also support them really well, there’s a lot of visits from the goalie staff, constant phone calls, zoom and I’m sure video content mixed in there as well. I’m a big believer in it. I think it’s you’ve seen a lot of goalies from our league make the NHL over time.

Lastly, Ontario Reign General Manager Richard Seeley joined the Reign Check podcast yesterday to preview the season to come. Audio embedded above, with a couple of selects posted below.

Seeley on the team coming together over the last week
For the first time, we’re the Reign. We’re starting to build our culture now. We have been a little bit, but you’ve had transition with guys coming in and out and now we’re a little bit of our own practices with our own power play and penalty kill units so we’re starting to build our identity which is exciting. I’m enjoying watching Marco and his staff work and seeing where they go with things and what they choose to structure for practice.

On where Martin Chromiak is now as opposed to where he was during his brief AHL debut in 2021
When we saw him at the end of the covid year, he came in and he was just good. Really likeable player, younger, professional, excellent shot release, kind of a goal-scoring instinct for me, you’d see a little bit there. Pretty powerful, a good stride, so skillset is really solid. I don’t want to put huge expectations, I really like Martin Chromiak as a person and as a player, but there’s a lot of work for him to still do. We’ll see where it goes, we want to try and put him in opportunities to be successful, I think for him, trying to get the puck in the slot and getting to those areas but also he’s coming from the OHL and he’s 20 years old, it’s typically the biggest jump these players will face in pro is that first year professionally. Even that jump from junior to the American League is going to be a challenge for him. So I think he’ll have some ups and downs, I think there’ll be some nights where he was a goal scorer there on Saturday night with a great tip and then there’ll be some nights that we’ll want him to continue to work on a few things but in the long term, I’m really excited about Martin Chromiak and in the short term our goal is to try to make him better every day. Little small habits and how he approaches the game and we feel we’ve got a good group of veteran leaders and players around him to learn from.

Practice to follow, Insiders! The Kings are on the ice shortly and we’ll check in after the team gets off the ice. Talk soon!

By Zach Dooley
349 Comments
Looking to the Future