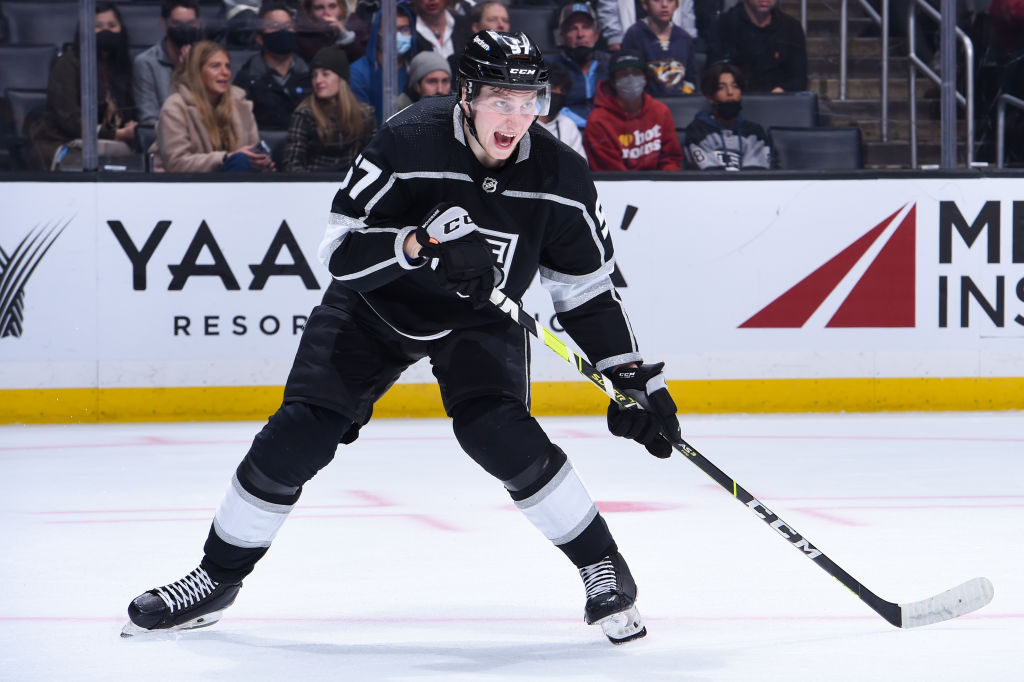 TONIGHT’S MATCHUP: The Kings head into their penultimate game of the preseason with their annual trip to Salt Lake City to take on the Vegas Golden Knights.

HEAD-TO-HEAD: The Kings took a 2-1 overtime decision over the Golden Knights 10 days ago, with forwards Kevin Fiala and Adrian Kempe tallying in the victory. Both players are expected to play tonight in Utah, with defenseman Brandt Clarke, who had an assist in the win, also expected to play.

KINGS VITALS: Below is tonight’s projected game group against Vegas, based on this morning’s line rushes –

As Todd McLellan said yesterday, the Kings have players in different stages entering these final two exhibition games, which will lead to certain veterans playing tonight while others wont. Among those not playing is Anze Kopitar, who has three games under his belt already and will likely feature in the preseason finale on Saturday.

Tonight’s game in Utah could represent a final audition for several players. If you recall, the sixth game last year during the preseason was in Anaheim, with a younger lineup against a more veteran-heavy Ducks squad. Many younger players, who had already been assigned to Ontario, were recalled and Arthur Kaliyev had a hat trick in that game. He never returned to Ontario. These games do mean something for players battling for roster spots and decisions, as we saw last season, decisions are not permanent.

Todd McLellan said after the game in Anaheim on Tuesday that Cal Petersen would start one of the final two games. Petersen was the first goaltender off the ice this morning, so we’ll expect him to go this evening with Pheonix Copley as the backup.

For the first time during exhibition season, we’ll expect to see defenseman Sean Durzi take the ice for a game with the LA Kings, with this morning’s skate placing him amongst those taking line rushes. A great sign of progress for the second-year blueliner, who has worked his way back from offseason shoulder surgery and is now set to make his preseason debut.

Last season, Durzi didn’t appear to be limited by his injury, but we also got used to seeing him play with it. He was carrying the shoulder injury for much of the season, nagging at him along the way, but he also got used to managing it and it was never once an excuse.

“I think that he had an injury that was ongoing, it was there and it was just time to have it fixed so that it wouldn’t keep continue on,” Todd McLellan said. “Did it affect this play a lot, I think he’s played a lot with it, maybe he got used to it, but it needed to be fixed.”

Durzi himself talked about how a season ago, he learned to manage the injury.

If you watched his play, you wouldn’t necessarily notice anything amiss, we only knew the Sean Durzi we saw last season and that was a player who was managing an injury for awhile. He expressed excitement about reaching that point when his shoulder felt as limited as it was last season and then better, because he was finally on the right path back to 100 percent in that department.

“I mean, it wasn’t great, but itt’s something where I knew I would miss some time and I was just waiting for the right time, even if there never really is a right time. I got it done and I’m looking forward to feeling even better. I guess I just got used to it and played through it.”

When returning from an injury, I like to ask players what the thing that takes the most adjustment is. It’s always something different, player-by-player.

For Durzi, he discussed making the right reads in the defensive zone at full speed, and that’s one of those things you can’t always get in a practice but can naturally get in a game setting. Scrimmages and practices present a certain level of competition, but it’s not the same as a true game setting.

“Maybe just the speed of making reads defensively again, but obviously that comes with getting games in and that will come. The coaches are pushing me every day and making sure I’m doing things right and that I’m doing it to the best of my abilities and then pushing it to be even better than that.”

More than anything, Durzi is excited to just get back at it. For the first time since game seven back in May, it’s game day for the Ontario native and that’s an exciting thing.

“Feeling good, ready to go. I’m excited finally and there’s not much more to do. Just go play.”

Mo Town
If preseason games are ones of opportunity, than consider defenseman Jacob Moverare ready to seize it.

“I see every day that I get to play here during preseason as an opportunity to show how I can play, play well and earn some trust with the team,” Moverare said this morning.

Moverare isn’t the flashiest player, but he doesn’t pretend to be. His game is based around steady play and reliability, which is what has brought him to this point and endeared his game to the coaching staff here in Los Angeles. For Moverare, it’s about doing those things well and make sure he’s taking care of the areas of the game that he’s able to impact the most.

That means being solid defensively. It means being one of the team’s best defensemen when it comes to defending off the rush and in odd-man situations. It means making clean first passes and not missing his spots when helping the group transition from defense to offense. All of which factors into steady play.

“I think it’s just about being steady, that’s my main thing that I need to really focus on,” Moverare said this morning. “I have to prove that they can trust me to be a steady guy. In practice, every 2-on-1, every 3-on-2, I try to not get scored on and I want to hit every pass, focus on the small details.”

Moverare’s game is built around those smaller details, which has allowed him to hold his own when pressed into duty on the Kings blueline last season. It’s what allowed him to, at times, hold his spot over those who were more established in terms of experience and it’s what he’ll need to excel at in order to make this season’s Kings lineup.

He’s fortunate to have two individuals – Alex Edler and Matt Roy – who play that style of hockey themselves and provide a strong role model for which to look after.

“Both Edler and Royzie are two guys that I try to look at a little bit extra, because they’re both really steady guys. I try to watch them, see what they do and how they play.”

We’ll look for that steadiness on display tonight in Salt Lake City.

The Kings are entering their fourth game played in Salt Lake City, Utah, their second against the Vegas Golden Knights. The Kings enter tonight’s action at 3-0 in past games played in Utah. The first two editions were played as the Salt Lake Shootout, which were 4-1 and 7-5 wins over the Vancouver Canucks in 2018 and 2019. Rebranded as Frozen Fury, continuing a longstandings Kings tradition, LA skated to a 3-1 victory over the Golden Knights during last season’s game in September.

The teams are contracted to play next season as well, in a relatively neutral side, with strong crowds taking in the three games to date.